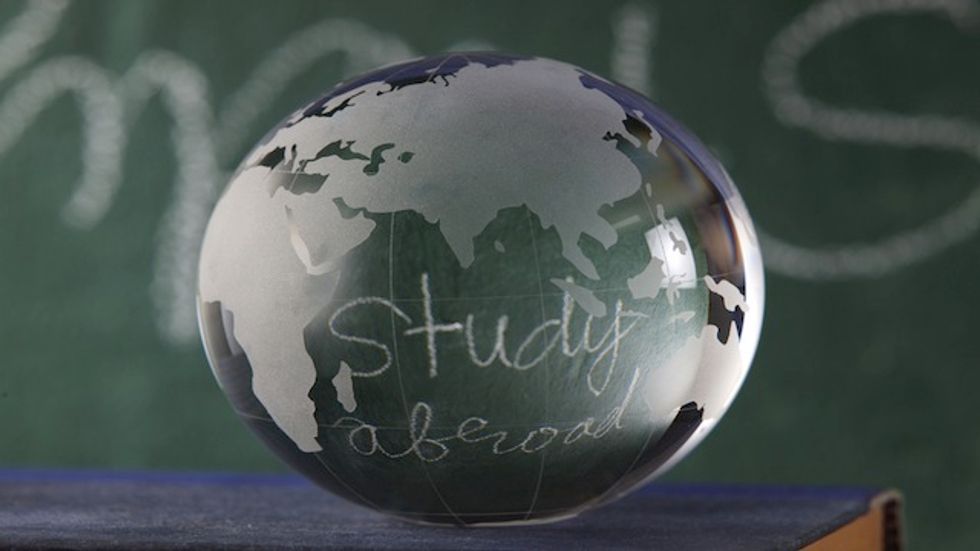 Like many college students, I took a semester abroad. I spent the first half of my junior year in London taking classes at UCL, exploring the museums, and learning the difference between two pints, two pounds and two pence. After a few lovely months on the “other” side of the pond I returned home feeling cultured. Of course, the difference between London and New York (where I went to school) was small. But the UK nonetheless influenced me to see the world a bit differently.

Such are the benefits of travel. A few weeks or months in a foreign country won’t necessarily transform our lives, but wandering the streets of Helsinki, Harare or Hong Kong leaves a residue on our minds. Returning home, this cultural footprint is hard to ignore and difficult to identify. Something's different, but what?

Given the importance of traveling abroad, it’s no surprise that psychologists study how these experiences affect our cognition. Do they make us smarter or more open-minded? Does learning a foreign language boost IQ? Is it a good idea to live outside of your native country for a while? Consider a study conducted by Lile Jia and his colleagues at Indiana University.

In one experiment the team of psychologists asked participants to list as many different modes of transportation as possible. They explained that the task was created by either Indiana University students studying in Greece (distant condition) or by Indiana University students studying in Indiana (near condition). This small ripple turned out to have large effects: participants in the distant condition generated more modes of transportation and were more original with their ideas.

The second experiment demonstrated similar results. The team asked participants to solve three insight problems. Here’s an example of one:

A prisoner was attempting to escape from a tower. He found a rope in his cell that was half as long enough to permit him to reach the ground safely. He divided the rope in half, tied the two parts together, and escaped. How could he have done this?

A ScientificAmerican.com article on Jia’s study summarizes the results this way:

This pair of studies suggests that even minimal cues of psychological distance can make us more creative. Although the geographical origin of the various tasks was completely irrelevant – it shouldn’t have mattered where the questions came from – simply telling subjects that they came from somewhere far away led to more creative thoughts.

In Imagine, Jonah Lehrer parallels this research with a 2009 study out of the Kellogg School of Management and INSEAD. The researchers “reported that students who lived abroad for an extended period were significantly more likely to solve a difficult creativity problem than students who had never lived outside of their birth country.” Lehrer concludes that, “the experience of another culture endows the traveler with a valuable open-mindedness, making it easier for him or her to realize that a single thing can have multiple meanings.”

It’s unclear if this finding is causal or correlative – students who go abroad might be endowed with an open and creative mindset in the first place – but the point remains: diverse experiences are good for creativity because they influence us to look at problems from multiple points of view.

This brings me to a brand new study out of Tel Aviv University’s School of Psychological Sciences conducted by professor Nira Liberman and a team of her students. They wanted to see if “expansive thinking” improves the creative output of 6 to 9 year olds.

Their experiment was straightforward. The researchers gave the kids a series of photographs displaying nearby objects (a pencil on a desk) and distant objects (a picture of the Milky Way galaxy). Here’s the important part: half of the kids started with the nearby objects and progressed to more distant ones (expansive mindset); the other half saw the photos in reverse order (contractive mindset).

Next, the kids tackled several creativity tests in which they were given an object and asked to name as many different uses for it. The tasks were designed to test “outside of the box” thinking. For example, if the object was a paper clip, an unimaginative response would be to hold paper. More creative answers, on the other hand, would be “a bookmark,” or “Christmas tree decorations.”

Liberman found that kids in the expansive mindset scored significantly better on all measures of creativity. They came up a greater number of uses and more creative uses for the objects. Why? According to Liberman, “spatial distance, as opposed to spatial proximity, was clearly shown to enhance creative performance…. [and] psychological distance can help to foster creativity because it encourages us to think abstractly.”

Two important findings come out of Liberman’s research. The first is that creativity can be taught. David Kelley makes this point precisely in a recent TED talk. Drawing upon personal experience and years of research, Kelley puts it this way:

Don’t let people divide the world into the creative and the non-creative like it’s some God given thing…. People [should] realize they are naturally creative and… these people should let their ideas fly. They should achieve… self-efficacy, [meaning they] should do what they set out to do… And reach a place of creative confidence.

The second point brings me back to London. One way to kill creativity and abstract thinking – two cognitive attributes vital in the 21st century economy – is to maintain a “here and now” perspective. London steered me away from this mindset; it influenced me to adopt a more open-minded perspective.

To be sure, my leisurely strolls through the British Museum didn’t make me smarter, and by no means was I “culturally transformed” upon hearing that 'soccer' was actually 'football'. But it’s remarkable what you can learn by sitting in an English pub for a few hours. For starters, pints are two pounds, not two pence.