Why Opposites Attract in Fiction But Not Reality

Decades of research suggest that we are not only initially attracted to likeminded people but that familiarity is essential for healthy marriage. 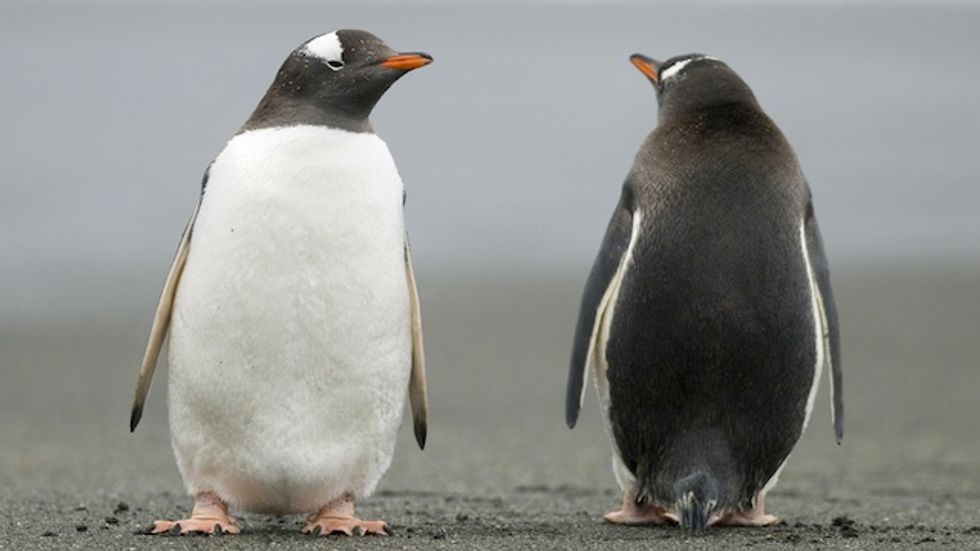 One of the most robust findings in psychological science is our tendency to gravitate towards likeminded people. Psychologists call this homophily - literally “love of the same” – and it exist in nearly every culture. Despite where we grow up or how we grow up, familiarity is comfortable; we like people who reinforce rather than test our beliefs. This is true for a wide number of characteristics: sex, gender, religion, age, education and social class. As the idiom goes: Birds of a feather flock together.

Homophily is most apparent in marriage. Decades of research suggest that we are not only initially attracted to likeminded people but that familiarity is essential for healthy marriage. Consider the Chicago Sex Survey, one of the first comprehensive studies conducted on sex in the United States. One finding was that “the great majority of marriages exhibit homogamy on virtually all measured traits, ranging from age to education to ethnicity.” Likewise, a landmark study conducted by Miller McPherson found that personality traits are a good predictor of marital stability and happiness.

The paradox is why romantic fiction is obsessed with opposites. If data shows that we are drawn towards people like us – there is virtually no evidence that opposites attract – then why Romeo and Juliet, Harry and Sally, and WALL•E and EVE?

The key ingredient of any story is conflict. Will Odysseus return to Ithaca safely? Will Moby Dick get the best of Captain Ahab? Will Walt and Skyler in Breaking Bad, or Don and Betty in Mad Men end up together? Darwinists point out that two things ultimately motivate all organisms: survival and reproduction. Literary Darwinists argue that it’s not a coincidence that these two goals are the most prominent themes in fiction from Homer’s The Odyssey to Kathleen Woodiwess’ 1970s pulp fiction romantic novel The Flame and the Flower to Woody Allen’s Love and Death, a satire on Russian literature. If the conflict is essential to fiction, then chances are it revolves around sex and violence.

One reason there is intrigue in conflict is fiction gives us a mental catalogue of strategies to deploy in order to resolve potential conundrums. What are my options if my lover’s parents despise me? What if I fall in love with a person who does not love me? How do I cope if my lover moves away? What if my family is at war with my lover’s family? What happens if my husband or wife dies? Perhaps opposites attract so much in fiction because the conflict it generates helps us navigate reality. As Steven Pinker points out, the cliché that life imitates art is true because the function of some kinds of art is for life to imitate it.

I pointed out in my last post that the goal of some postmodern writers is to scrap clichés in favor of more accurate accounts of everyday life. The problem with this so-called hyperrealist fiction is that it’s incredibly boring. As Jonathan Gottschall explains, “hyperrealism is interesting as an experiment, but like most fiction that breaks with the primordial conventions of storytelling, almost no one can actually stand to read it.” If we are naturally drawn to sex and violence in fiction, it’s conditional on the sex and violence being clouded by conflict and sensational. The brain evolved to tune out what’s ordinary and pay special attention to what’s extraordinary.

But it’s not conflict and sensationalism per se that draws us in. What we really love are resolutions; it just happens that conflict is the necessary ingredient. Charles Dickens opened A Tale of Two Cities with the famous predicament, "It was the best of times, it was the worst of times,” and continued with a few more dualities such as "It was the age of wisdom, it was the age of foolishness." If the story ended there it wouldn’t be memorable. Readers needed to see how the lives of Charles Darnay and Sydney Carton unfolded.

Framing the world in terms of contradictions isn’t just a literary technique. It’s a natural function of the brain; a cognitive shortcut meant to simplify the world. The Chinese divided the world into Yin and Yang, Hinduism contrasts Shiva the destroyer with Vishnu the preserver, and virtually every belief system juxtaposes good against evil. Our propensity to dichotomize the world probably contributes to the widespread theme of opposite romantic partners in fiction and feeds into our craving for resolution in fiction. The irony that while resolution satisfies, permanent resolution is dull: we always crave a little bit of tension in story.

Just think about Jim and Pam in The Office. Their delicate courtship was marked by moments of extreme tension because Pam was engaged to another man. A provocative kiss at the end of season two provided temporary relief, but Jim’s decision to date his other co-worker Karen Filippelli in season three returned him and Pam to square one. The conflict didn’t resolve until season five when Pam said yes to Jim’s roadside proposal. Since then, Jim and Pam became the most boring characters on the show despite periodic moments of humor. They are too ordinary without the natural tension of courtship.

Or consider the mediocre 2010 action comedy Date Night starring Steve Carell and Tina Fey. Phil and Claire Foster (Carell and Fey) are a couple from New Jersey bored with their marriage. After watching their best friends divorce in order to live more thrilling lives, Phil takes Claire to an expensive restaurant in Manhattan to renew excitement in their own marriage. One thing leads to another and they are caught up in a scandal involving the DA and the police. The thrill of car chases and gun fights reignites their marriage and the movie ends on a happy note. But what if there wasn’t a scandal? What if Phil and Claire had dinner and went home? What if there were no car chases and gun fights? Like Jim and Pam post-marriage, Date Night would be boring hyperrealism.

I presented the gap between real life and romance in fiction as a paradox at the onset. But evolutionary psychology resolves the inconsistencies: the brain is not only focused on reproduction, it pays special attention to extraordinary instances of reproduction. This includes everything from Pixar characters to Shakespeare’s star-crossed lovers. Let’s hope writers of The Office remember this.