The World Should Not Tolerate Modern-Day Slavery in Qatar

Qatar, host of the 2022 World Cup, is constructing event infrastructure with what basically amounts to modern-day slave labor. Where is the outrage? 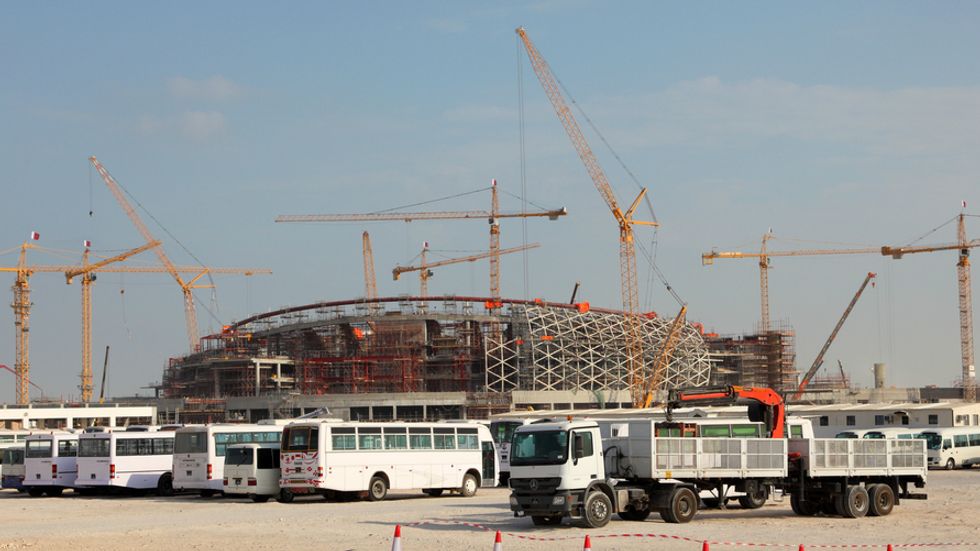 We've still got seven years to go until the 2022 World Cup and it's already an unmitigated disaster. Allegations of corruption and bribery haven't stopped FIFA chief Sepp Blatter (who is something of a James Bond villain masquerading as a sports executive) from doubling-down on the organization's questionable (and probably corrupt) decision to award the sporting event to the tiny, oil-rich Arab nation.

[EDIT - 6/1/2015: Blatter and his cronies have since been given their comeuppance, though World Cup 2022 plans remain solid.]

The tournament has since been moved to winter due to insane outdoor temperatures during the Qatari summer, a move that places the World Cup smack in the middle of most club league seasons.

Soccer fans who might travel to Qatar are, as of now, offered no guarantee that the human rights they enjoy elsewhere will be protected in a country where, for example, homosexuality is illegal.

FIFA has covered up a report that likely points to ethical lapses that allowed Qatar to win the 2022 bid and for Russia to secure the 2018 event.

You can click any of the above links and spend hours poring over the tangled web of corruption that FIFA has spun. It's hard to make NFL commissioner Roger Goodell look like a saint in comparison, but that's exactly what Blatter and company have done.

Still, in this day and age, corruption is to be expected from powerful sports executives, writes the foul-mouthed yet wisdom-spitting Drew Magary of Deadspin. That said, all the corruption mentioned above doesn't begin to touch the surface of FIFA's greatest affront to basic human dignity:

"Qatar's World Cup infrastructure is being built using Moses-era slavery practices. ... Thanks to FIFA's open fondness for bribery, 4,000 migrant workers are expected to die in service of a shortened World Cup that has been moved right into the heart of the professional soccer universe's regular season schedule. It will be terrible in every conceivable way."

Magary writes that, as a sports fan, he's open to suspending certain ethical apprehensions for personal enjoyment. After all, this is the mindset of all those who follow sports like boxing, where the aim is for each athlete is to give the other a traumatic brain injury. And it's not like the 2014 World Cup in Brazil wasn't itself a mess of ethical violations. But when it comes to slavery, Magary has to put his foot down. He wants the U.S. Men's National Team to boycott the tournament:

"That has to end. I am a sports fan, which means that I am willing to put up with a lot of corrupt jackassery from my owners and commissioners and college presidents. It's baked right into the system. But come the [naughty word] on. This is insane. ... We shouldn't tolerate what's going on over in Qatar. We should pull out, and we should do it now."

It's not like this hasn't been a well-reported story. No one is hiding the fact that migrant workers from Nepal and various Southeast Asian nations are being labored to death while building infrastructure for a World Cup no one is excited for outside of high-class Qataris and fat-cat FIFA execs. But for whatever reason, international outcry has been tepid at best. You hear more about people angry that the event is happening in the winter than outrage over slavery.

Magary is right. If appeals to logic and human dignity won't convince FIFA to step in and/or move the tournament, appeals to their wallet will. Several well-known brands such as Sony have already ended FIFA sponsorship, primarily because they understandably don't want to be associated with slavery. Perhaps if greater awareness were to be spread and organizations such as the U.S. Men's National Team pulled out, FIFA's major partners like Coca-Cola would follow suit.

If world leaders are really as dedicated to eradicating modern-day slavery as they like to think they are, the 2022 World Cup needs to become a more major battlefield in that effort.