Maya Angelou will be commemorated in a new permanent art installation in San Francisco. Poet and novelist, Angelou had a storied relationship with the city. She attended the George Washington High School, and was said to have been one of San Francisco’s first African American female streetcar conductors.

The announcement follows an outcry from the community asking for better representation of women in sculptures. In 2018, San Francisco’s board of supervisors passed a city ordinance calling for representation of historical women to reach at least 30 percent. After a year of legislation, the ordinance finally went through. As of today, only two of the 87 public statues depict women. Those being, a sculpture of Florence Nightingale and a bust of Sen. Dianne Feinstein (D–CA).

Maya Angelou was chosen because of her life’s celebrated and influential career.

The San Francisco Arts commission remarks, “The artwork is intended to honor one of the most significant literary artists and activists of our time, and will be an ever-present role model and inspiration to girls and young women.”

The city’s Art Commission sent out a call for art applications in November of 2018. They received more than 100 qualified submissions. After whittling those down to the best 13 artists, they eventually chose three finalists. The statue will be installed by December 31, 2020 with an estimated cost of around $400,000. The city will supply the majority of the funding with the help of some private donors.

The three proposals come from the following artists: Kenyatta A.C. Hinkle, Jules Arthur, and Lava Thomas. All of which, are strikingly beautiful and well designed. 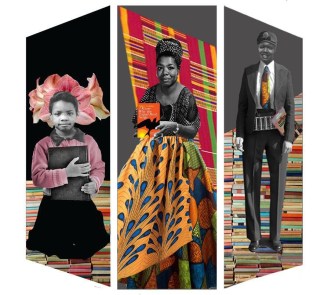 Kenyatta C. Hinkle, an American artist and assistant professor of painting at UC Berkeley proposed “The 3 Mayas,” which is a seven foot tall and three sided. It’ll consist of three versions of Maya in different stages of her life. The first, as a little girl holding a book, a teenager in a streetcar uniform, and finally a middle age woman holding her most famous book, I Know Why the Caged Bird Sings.

Speaking with the San Francisco Chronicle, Hinkle referenced a speech by the author’s son, Guy Johnson. “He said that his mother would not stand for any injustice being carried out in her presence — she would never turn her back to injustice.” You will never see the back of this monument. You will always have a version of Maya looking at you.” 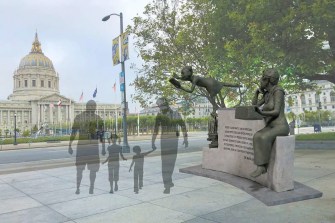 Jules Arthur, an artist from New York City, proposed “The Gift of Literature,” as a granite wall with a quote from Angelou regarding the importance of reading.

When I look back, I am so impressed again with the life-giving power of literature, If I were a young person today, trying to gain a sense of myself in the world, I would do that again by reading, just as I did when I was young. – Maya Angelou

The statue will feature Angelou on one side as a young girl standing with one leg atop a birdcage and stack of books. The other side of the granite will have the older Angelou, looking at the reflection of her younger self. Arthur calls this a work of “metamorphosis.” 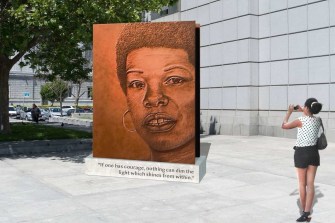 Lava Thomas’s design is a towering nine-foot sculpture that is shaped like a book, with a portrait on Agelou’s face on the front.

Regarding the sculpture, the artist stated, “I want my monument to… convey Dr. Angelou’s towering achievements her intelligence, her wisdom, and to emphasize her insistence on our shared humanity.”

This iteration of Angelou artwork also includes a quote by the author: “If one has courage, nothing can dim the light which shines from within.”

The artists’ designs have been on display at the San Francisco Library, so that the public could provide feedback. The finalist will meet with the Visual Arts Committee on August 21 and then be approved on September 9th.

These ten maps provide a fascinating insight into the impact that soccer (sorry, football) has had worldwide.
The Past

The word “turkey” can refer to everything from the bird itself to a populous Eurasian country to movie flops.
The Learning Curve

By challenging your preconceptions, art offers a framework by which you can solve problems.
Neuropsych

They believe in meritocracy, yet leave their kids massive wealth.
Up Next
Neuropsych

Schadenfreude turns us into temporary psychopaths, according to a new model of the emotion

Ever taken pleasure in someone else’s misfortune?