As if losing weight wasn’t hard enough. A new study from researchers at the Max Planck Institute for Metabolism Research reveals that we’re rewarded twice when eating. The first dopamine kick occurs when tasting food; the second, when the food reaches your stomach.

Making this process even more insidious, the more you crave the food, the less dopamine is produced by your stomach, which the researchers believe might lead to overeating.

Previous research has shown that even thinking about food starts the process of salivation by releasing a protein enzyme, amylase, which helps break down food before it reaches your stomach. Interestingly, if you head to your favorite restaurant and they’re out of the dish you’ve been craving, the emotional discontent is real. Your brain has been tricked—well, your brain tricked itself.

For this study, the researchers write that pleasant taste and nutritional value are both reinforcers for consuming certain foods. Yet the desire for a gustatory-pleasing experience overrides health concerns. They point to research highlighting the brain’s dopaminergic system as the key mediator in overeating. In simple terms: If we like it, we eat it, and keep eating it beyond the point of satiation. 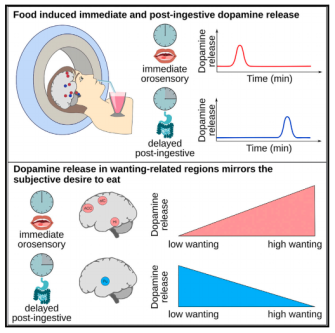 As the team puts it:

Highly processed food with added fat and sugar is known to include higher food wanting and overconsumption.

This has been expressed in evolutionary terms elsewhere. Sweet and fats were rare throughout most of history. When our ancestors discovered them, they gorged. Now, at a time when the entirety of taste profiles and nutrients are a few swipes on your phone away, the dopaminergic system hasn’t caught up to the news that we don’t need all those tastes all the time. Dopamine keeps us swiping.

To test the physiological reasons for this, the team at Max Planck recruited 12 normal-weight male volunteers (average age, 56) to drink either a milkshake or a tasteless chemistry experiment in a glass. They then performed PET (positive emission topography) scans on their brains. Lead researcher, Marc Tittgemeyer, explains the results:

With the help of a new position emission topography technique we developed, we were not only able to find the two peaks of dopamine release, but we could also identify the specific brain regions that were associated with these releases.

Marion Nestle: Why Do We Overeat?

The first release, as expected, occurred in the reward system. They identified dopamine release in the lateral hypothalamus and dorsal striatum, as well as the orosensory pathways, mesolimbic dopamine system, and regions associated with reward value signaling, memory, and inhibition control. This complex interplay of regions connects desire with continual consumption, especially those last two regions, the hippocampus and lateral ventral anterior nucleus of the thalamus.

The second dopamine release occurred 15-20 minutes later, when the milkshake was in their stomachs. These higher cognitive function regions include the anterior insula, ventral posterior medial nucleus of the thalamus (again), caudate nucleus, palladium, and amygdala, among others. Basically, the brain was being told that a) everything is all good and b) I like it.

The strangest result was the fact that the more a volunteer craved the milkshake, the less dopamine was produced in the second stage. As study co-author, Heiko Backes, states:

The researchers agree that this might be the physiological reason we overeat. As with many drugs, we desire the feeling we originally received when first consuming the food. The stronger the desire, the less effective it is. Our response is to keep returning in hopes of chasing down that initial feeling.

Of course, 12 men drinking milkshakes is just the beginning of this research, but fascinating at that. The more we understand why we overeat, the closer we are to finding solutions.

Drugs that stifle acute inflammation may prevent the body from healing properly.
Up Next
Starts With A Bang

The Galaxy That Challenged Dark Matter (And Failed)

This large, fuzzy-looking galaxy is so diffuse that astronomers call it a “see-through” galaxy because they can clearly see distant galaxies behind it. The ghostly object, catalogued as NGC 1052-DF2, […]