The use of isolation and quarantine has a history of success going back to the black plague. The practice of isolating sick people form healthy ones intuitively strikes many of us as useful, and many of us do it on our own accord when we fall ill. It seems like a simple step up from that to the idea of quarantining people who are sick or have been exposed to deadly diseases to stop them from spreading.

However, the impositions on individuals that quarantine requires, such as isolation from friends, family, and activity is a rather steep price to pay. Besides, the use of force to limit people’s freedoms for the greater good is always a moral minefield. Deciding exactly when, where, and how to implement a quarantine is a tricky business.

A paper by Alberto Giubilini, Hannah Maslen, Tom Douglas, and Julian Savulescu of the Oxford Uehiro Centre for Practical Ethics might have a solution. By taking a moral approach to the problem, one that seeks the most robust possible foundation for intervention, the authors hope to provide sound guidelines to people considering the question of when to intervene and when to take no action. 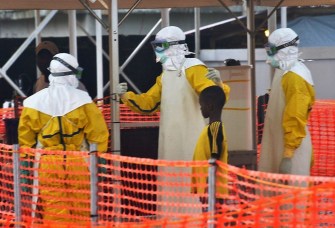 Health workers are seen with a young patient under quarantine at the Nongo Ebola treatment unit in Conakry, Guinea on August 21, 2015. The World Health Organization WHO has lost track of 45 people under surveillance, who had been in contact with a patient who contracted Ebola, in Guinea. (CELLOU BINANI/AFP/Getty Images)

​What is a quarantine exactly? 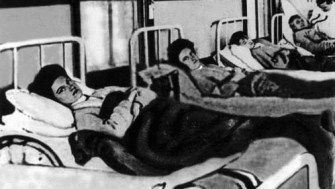 “Typhoid” Mary Mallon, far left, in quarantine. Her refusal to wash her hands while carrying typhoid fever bacteria may have killed fifty people. She was forced into quarantine for the safety of the public.

​Why would quarantine be a good idea? After all, they aren’t sick yet!

The first argument that the authors make is the obvious one, society benefits a great deal from quarantining a person who might be carrying a deadly disease at a relatively low cost to that society and a moderate cost to the person quarantined. A person who is exposed to Ebola might contract the disease and start spreading it before they are aware of their illness. Quarantines try to prevent this by hiding away anybody who might have been exposed to a disease, even if they are asymptomatic.

This consequentialist stance is the one typically invoked by governments and state agencies when quarantines are introduced, but the authors don’t think it is the best ethical foundation. After all, it might be for everybody’s benefit to lock away anybody exposed to the common cold for a week to keep infection rates down. This seems excessive, suggesting that the final answer lies elsewhere.

The authors then argue that, in many cases, the individual exposed to a potentially deadly disease will have a moral duty to quarantine themselves; making what the authorities do merely the enforcement of what a person ought to do anyway.

They use the example of Peter Singer’s drowning child. Singer famously asked if we had a moral obligation to save a drowning child if the act of saving them was at a low cost to us. He concluded that we do, and many people agree with him. The authors call this the duty of “easy rescue” and argue that it applies in many quarantine cases since the cost of a person hiding in their room until they know they won’t make others sick is typically low while the payoff could include saving lives.

The authors then suggest that, “when the cost to us of engaging in some activity is small, and the harm to others which is prevented is great, the state may permissibly compel us to engage in that activity.” They place this inside of certain parameters, however.

Most of us would agree that we must keep other people from getting sick when we are ill. However, the suggestion here is that in severe cases, like when the illness in question is deadly, that the state has legitimate power to make sure we stay home. This is more limited than just comparing costs and benefits and doing whatever gives the best payoff, but still allows for interventions during the worst outbreaks.

​But what about the freedom of the individual?

The authors don’t suggest that the authorities should always start with quarantines and use them whenever the mood strikes. They make it clear at the beginning of their paper that, “we will argue that authorities ought to implement quarantine and coercion in such a manner that they have the strongest justification possible for those measures.“

They also point out that any rational use of quarantines would be limited to severe cases. As they note, while it might be a social net-positive to quarantine people with the stomach flu, the lack of threat it poses makes the action unthinkable. Ebola, on the other hand, is enough of a threat to people that quarantines would be justified.

At some point though, the freedom of a person to do what they like would be infringed on for the sake of the public health. Many people are put off by this. The question is determining when an individual poses enough of a threat to the people around them that forcing them into quarantine is justified. The authors are of the mind that this is permissible when a person might have a very deadly disease.

In some cases, quarantine laws are overused and not based on a cost-benefit analysis, such as when New Jersey introduced a quarantine of people who had been in certain African countries during the 2014 Ebola outbreak. The poorly thought out law was changed after a lawsuit was brought against the state. This case should be a warning against over-application of quarantines, but not against their use when they are correctly implemented.

The idea of using force to lock people in their rooms to assure that others don’t get sick is a tricky one. It makes perfect sense when we’re healthy, but seems like a potential use of excessive force when we might be on the sick bed. Nevertheless, the ethics surrounding this issue are far from settled though. Given that we’re already preparing for the next pandemic, we may be ruminating more moral questions sooner than we think.

Humanity’s most advanced tech still hasn’t unraveled the mysteries of the human mind. Can brain scans show us how we store memories?
▸
with
Lisa Genova
Up Next
Hard Science

The billionaire is also inviting eight artists along with him. It would be the first time a civilian crew has participated in a mission to the moon.