Thanks to the wonders of modern medicine, dying from communicable diseases is rare these days. It’s noncommunicable diseases (NCDs), like cancer, cardiovascular disease, diabetes and respiratory disease, that we’re told to worry about. According to the World Health Organization, NCDs account for more than 70 percent of all deaths globally.

The mainstream belief has been that noncommunicable diseases are caused by genetic, environmental, and lifestyle factors, like diet, rather than transmission by bacteria, viruses, or fungi. But, in recent years, scientists have come to discover that the microbiome has a big influence on our health. A newly published hypothesis suggests that some noncommunicable diseases can actually be transmitted between people via their microbiomes. Photo of gut bacteria photographed over a lightbox.

Photography by Chris Wood via Wikimedia

What is the microbiome?

The microbiome is a cluster of bacteria, viruses, protozoa and fungi — a sort of microbe ‘aura’ — that live in and on a person’s body. Most make their abode in the lower gut. Research has suggested that that these critters help facilitate the function of certain physiological systems, such as digestion, metabolism and immune defense. A new analysis found that your microbiome can convey more information than your genes about your chance of developing various health conditions such as asthma, cancer, and even schizophrenia. No one knows for sure what distinguishes a healthy microbiome from an unhealthy one, but people who have health issues including diabetes or cardiovascular disease typically host a different cocktail of bacteria in their guts than healthier individuals. Take cardiovascular disease for example. If you eat red meat, there are specific microbes that produce an enzyme that breaks it down into a compound called trimethylamine N-oxide (TMAO). People who have a higher concentration of TMAO in their blood increase their chance of developing cardiovascular disease. That probability increases even more if those TMAO-producing bacteria appear in the gut.

Now, a new theory published in the journal Science opines that by being exposed to an unhealthy cluster of microbes, healthy people could possibly put themselves at risk of “catching” the noncommunicable diseases caused by them. 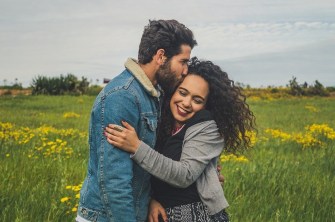 A radically new way of thinking about disease

The stunning hypothesis that noncommunicable diseases may be communicable would be a paradigm shift according to B. Brett Finlay, the microbiologist at The University of British Columbia in Vancouver who authored the study. He told Live Science in an email that this could lead to a “whole new way of thinking about these diseases.”

Previous research has hinted at the possibility that parts of the microbiome could transmit between people living in close quarters. For instance, there was a 2019 study conducted in Fiji in which researchers discovered from saliva and stool samples that people who lived in close proximity to each other shared similar microbiomes. The team was able to predict which participants in the study were coupled by looking at only their bacteria clusters. If these microbes can flow between people, it seems logical to suspect they could facilitate disease. A study published in 2003 found that people who have spouses with type 2 diabetes have a higher risk of developing the disease within 12 months of their partners diagnosis. This was also true of spouses of people with irritable bowel syndrome. (Around 80 million microbes can be transferred through just a single kiss.)

There is also building evidence to suggest that obesity, one of the leading risk-factors to several NCDs, is also communicable. Having an obese friend or sibling has been found to increase someone’s chance of becoming obese, and research on military families found that being stationed in a region with higher obesity rates raises a person’s chance of a higher BMI. Of course, that could all be due to taking on the diet of a person you’re close with or of a country you are in. However, another study found that healthy, lean mice gain significant weight when they receive a fecal transplant from already-obese mice, indicating that microbes play a part in contracting disease.

It’s difficult to prove that certain diseases are caused by microbes rather than environmental factors like diet because the two are so intimately intertwined, so more research will have to be done to prove this fascinating hypothesis.

How to keep a healthy microbiome

This new way of looking at disease offers a plus side. The fate of your health might not totally lay in the genes you’ve been dealt, but in the controllable makeup of microbes in your gut. So, how does one enhance his or her microbiome exactly? Avoiding meat as well as dairy products and a large variety of fruits and vegetables is one big way. Plants are high in fiber and contain complex carbohydrates that feed the good bacteria and decrease the bad. Another thing you can do is incorporate fermented foods into your diet, like kimchi, knifer, and kombucha. Go ahead and indulge in a bit of red wine as well if that’s your thing. It’s also been found to offer gut benefits. After all, as Finlay noted, looking after your own microbiome won’t just be of personal benefit, but maybe to those close to you as well.

Mycobacterium leprae, the bacteria that cause leprosy, have the surprising ability to grow and reverse aging in armadillo livers.

It weakens the bacteria so that the immune system can destroy it.
Hard Science

From astrobiology to geology, a Moon base could serve as a laboratory unlike anything on Earth.
Health

Three years after the pandemic began, we still don’t know the origin of COVID. A strange lack of curiosity has stifled the debate.
Up Next
Thinking