Why does God allow evil to happen? This question has been at the heart of Western religious philosophy since the dawn of monotheism. The very term and concept of God has long divided humans. Is he the first mover? Beyond definition, as many have argued? If God is all-powerful and humans are incapable of even defining him—I’m using “him” out of convenience, as “it” would be more appropriate in this case; a gendered deity is quite definable—why are so many certain they recognize his moral standing? Given how many sects of religions exist, how can so many people be so wrong?

If we recognize that evil exists (a hard point to dispute), and we also believe that God is omnipotent and omniscient, then we are granting this deity—to be clear, we’re discussing the Abrahamic god—the power of knowing when evil exists and an ability to eliminate it. If God is incapable of stopping evil he is not all-powerful. If he is capable of stopping evil but chooses not to, well, we’ve got an evil God on our hands.

To highlight his reasoning, Sterba uses the example of homicide. A man gets a gun, loads it, aims, and pulls the trigger. The speeding bullet is the consequence of an idea: he wants to murder someone. Sterba does not concern himself with God’s role in the internal process that led to the purchase and usage of that gun. Thinking, he claims, is for man alone. He questions why God would not have stopped the external consequence of the shooting. He’s not looking for this deity to play the role of thought police, but to step in as actual police would. 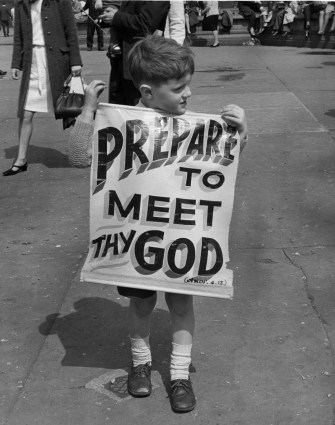 A young boy carrying a placard in London’s Trafalgar Square which says, ‘Prepare to Meet Thy God’.

While this discussion is often relegated to religious philosophy, we regularly witness the effects. Sterba mentions the Pauline principle, that “one should never do evil so that good may come.” Murdering a doctor that provides abortions, a platform accepted by extreme religious conservatives, falls into this category. We can place the record number of migrant children held in detention centers in 2019, nearly 70,000, because their imprisonment supposedly saves American jobs, or keeps brown people out, or this week’s excuse du jour in that category as well.

Sterba invokes the Doctrine of Double Effect, citing the famous ethical dilemma known as the Trolley problem. A speeding trolly is about to kill five people. You’re standing on a bridge and can pull a lever to veer the car to another track and only kill one. In most studies, five to one is easy for people to grapple with—except when they are asked to physically pull the lever, that is. Regardless, the tradeoff is less evil thanks to the hands of a human.

While Sterba focuses on moral evil, he entertains nature as well. Take climate change. Beyond the acceleration of environmental catastrophes, the planet has never actually been completely hospitable to humans. Natural disasters have always occurred; our species has nearly been wiped out in past eras. Why would an all-powerful god not make this planet more amenable to our survival if we’re really his chosen species?

“Even if we think God is behind everything, we should do all we can.”

In the Canaan religion, Yahweh was a lesser god, who was assigned the land of Israel. Here’s how he became “God Almighty.”
Thinking

People often ask “What should I do?” when faced with an ethical problem. Aristotle urges us to ask “What kind of person should I be?”
High Culture

A merging galaxy cluster in MACS J0416.1–2403 exhibits a small separation of X-ray gas from the gravitational signal, consistent with the notion that dark matter and not normal matter is […]