An old friend of mine never drank water — ever — a fact I didn’t notice until she pointed it out one day. We often DJ’d together, meaning that we’d be in the club until 4 am. Sure, there was alcohol, but generally she didn’t drink much of that either. She simply didn’t drink.

Except coffee. That was the only liquid she put into her body during the course of the day. “It’s made of water,” she’d laugh. She wasn’t incorrect. But to not drink water, at all? Even more surprisingly, one of her clients was Smartwater. She had boxes of product in her apartment. Until this week, I believed her to be an outlier.

A new research letter, published in JAMA Pediatrics on April 20, discovered that one out of every five adolescents and teenagers do not drink water on any given day. The letter, covering 2011–16, was constructed using data from the National Health and Examination Survey. Over 8,000 youth, aged two to 19, were involved in the survey.

Not drinking water is bad enough, but a bigger problem is what they replaced it with: sugar-sweetened beverages (SSBs). While my friend had to contend with caffeine withdrawal, these children are dealing with something far more serious: obesity. Children who don’t drink water consume twice as many calories as those that do.

The Importance Of Drinking Water For Children

The Importance Of Drinking Water For Children

The average calories consumed through beverages by all the participants was 132 per day. For those that reported drinking water as well, the number was 112 calories; for those replacing water with juices, caloric content jumps to 210. The survey relied on 24-hour recall by the participants; younger children were assisted by their parents.

Lead author of the study, Asher Rosinger, from the Department of Biobehavioral Health at Penn State, says that this, in part, is driving the obesity epidemic among adolescents and teens.

“What you have to remember is that an extra 3,500 calories equals one pound of weight gain. So if you’re not compensating for those extra calories, then over a month, you can potentially gain a pound.”

It’s not only weight gain. Two-year-olds are coming to the pediatrician with fatty liver disease; teens with type 2 diabetes. Other noted problems from drinking too many SSBs include dental issues and high cholesterol. Given that the foods we consume during youth tend to become “comfort foods” as we age, this is a rough beginning to what will likely be an unhealthy life. 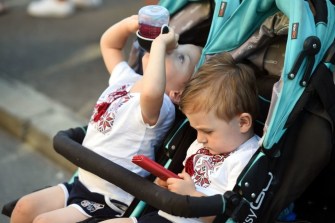 A baby plays with mobile phone while his twin brother drinks juice as they attend the children’s Festival Of Twins, in Kiev, on August 11, 2018. (Photo by Sergei Supinsky / AFP / Getty Images)

Water remains the healthiest beverage imaginable. Among its benefits:

The study skewed along racial lines as well. Non-water-drinking white children consumed the most calories on average (237), with black youth coming in second (218) and Latino children last (176) — which, for health reasons, is really first. That said, the economics of access to clean drinking water is a concern that the authors entertain.

Systemic problems, such as water problems (à la Flint) need to be addressed. As Rosinger notes, contamination “is a growing problem in the U.S., so we need to keep that in mind as important context, especially when it comes to parents who may be giving their kids soda or juice because they distrust the water. Therefore, it’s critical to ensure that everyone has access to safe, clean water.”

Of course, experts warn against replacing water with sweetened drinks, but that’s just common sense. Given that water is an elemental foundation of biological life, the lion’s share of the blame falls on parents. We all need liquid to survive. Offer children water. Cut out the sweets. Some problems are complex while others simply are not.

For decades people have arranged to freeze their bodies after death, dreaming of resurrection by advanced future medicine. Many met a fate far grislier than death.
Health

Cycling – active transportation or death trap?
Up Next
Starts With A Bang

The XENON1T detector is shown here being installed underground in the LNGS facility in Italy. One of the world’s most successfully shielded, low-background detectors, XENON1T was designed to search for […]