Shutting down the U.S. to limit the spread of COVID-19 has cost the nation millions of jobs and trillions of dollars. But what’s less clear is what these measures have accomplished so far.

“These findings may help inform whether or when these policies should be deployed, intensified, or lifted, and they can support decision-making in the other 180+ countries where COVID-19 has been reported,” the researchers wrote. 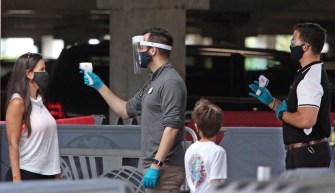 The study examined the efficacy of interventions in six countries: China, South Korea, Italy, Iran, France, and the United States. The researchers looked at epidemiological data in various areas, recording how quickly the virus was spreading without any preventative measures in place. In most areas, the number of infections was roughly doubling every two days.

Using this data on how fast COVID-19 was spreading in the spring, the researchers used economic models to estimate the effects of the six nations’ shutdown orders. The results suggest that non-pharmaceutical interventions — like closing businesses and public spaces — significantly slowed the spread of the virus.

“Without these policies employed, we would have lived through a very different April and May,” Solomon Hsiang, lead study author and director of the Global Policy Laboratory at the University of California at Berkeley, told the Washington Post. Venezuela Under National Quarantine Due To CoronavirusGetty Images

A separate study also published Monday in Nature points to a similar conclusion. Conducted by a team at Imperial College London, the study examined 11 countries in Europe, estimating that shutdown orders saved 3.1 million lives and dropped infection rates by an average of 82 percent.

“Our results show that major non-pharmaceutical interventions and lockdown in particular have had a large effect on reducing transmission,” the researchers wrote. “Continued intervention should be considered to keep transmission of SARS-CoV-2 under control.”

Both studies highlight the importance of stopping a virus from spreading as early as possible. That’s mainly because of exponential growth: When infections double every two days, it doesn’t take long to reach pandemic levels. In other words, an outbreak left unmitigated becomes increasingly dangerous with every minute.

Both studies also noted that the pandemic is ongoing, and suggested that these kinds of non-pharmaceutical measures are still helping to limit the total worldwide number of infections.

“The whole point of this study is to help us understand what we got for this tremendous sacrifice that the country has gone through,” he told the Washington Post. “Ultimately, whether or not it was worth it is something society has to decide.”

Explore the key highlights from the UN’s latest release of its world population estimates.

The programming giant exits the space due to ethical concerns.