Twice a year, researchers have a difficult decision to make: choosing influenza strains to include in the flu vaccine. Of course, they don’t always get it right. In 2014, for example, the flu vaccine was only 19 perfect effective, though just the year before it proved to be 52 percent effective. The vaccine is the product of educated guesswork, one that medical professionals would love to see improved upon. Sadly, this year it does not appear to be especially effective.

A potential breakthrough occurred last year when researchers at Georgia State University and Emory University tweaked an old influenza remedy and discovered that it cured ferrets of the virus. Further testing awaits on humans, but it represents an important step. A new study conducted at the Institute for Biomedical Sciences at Georgia State University has resulted in another big step: the potential development of a universal flu vaccine.

Worldwide, over 600,000 people die from influenza every year. While there are only three strains of influenza that affect humans (a fourth might make us sick, though we’re not certain), each strain has a number of subtypes. Guessing which of these is going to appear makes the vaccination results unpredictable. Though a major epidemic hasn’t hit us in a century—in 1918, 500 million people were affected by the flu, resulting in 50 million deaths—any year could result in such devastation. The 2017-2018 season broke the record for number of deaths in America.

Could a Universal Flu Vaccine Replace the Seasonal Flu Shot?

Could a Universal Flu Vaccine Replace the Seasonal Flu Shot?

Researchers at Georgia State University created a novel nanoparticle vaccine by combining a pair of influenza proteins: matrix protein 2 ectodomain (M2e) and neuraminidase (NA). Mice immunized with this vaccination received long-lasting protection against influenza. According to first author of the study, Ye Wang, this approach might help in the development of a universal vaccine.

Co-author Gilbert Gonzalez states that previous flu vaccines haven’t focused on NA, which might explain the broad efficacy of this new vaccine.

“NA is becoming a more important antigen for influenza vaccine research. Previously, it had been ignored or discounted because hemagglutinin (HA) is much more dominant. When you get a flu infection, your body reacts to the HA.” 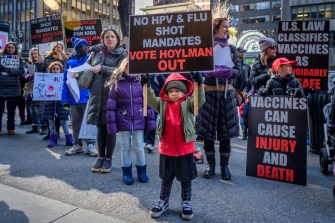 A child holding a sign at an anti-vaccination rally. The parents of the Iowan girl that went blind offer one piece of advice: get your child vaccinated.

The flu isn’t broadly discussed until it affects large populations. Yet every year it causes major damage. The most endangered populations are seniors and children. Last week, a four-year-old girl in Iowa became blind after combating this year’s flu. Two Nebraskan children and two children in Michigan have reportedly died this season. A new meta-analysis, combining 19 controlled studies, found that pregnant woman that receive the flu vaccine help protect their newborn.

Vaccination is especially important given that experts predict 2020 to be a particularly bad year. In Erie County, New York, there have been over 700 reported flu cases already this year, resulting in at least one pediatric death. At this point last year there were only 100 cases. Sixteen people have died this season in Minnesota, doubling the number of deaths from 2019.

The team at Georgia State University plan on loading this vaccine onto microneedle patches and testing it out via skin vaccination. Hopefully this research will pan out, as a universal vaccine would be of great benefit to an under-discussed yet persistent killer.

Tags
healthhuman bodyillnessmedical researchmedicineVaccines
In this article
healthhuman bodyillnessmedical researchmedicineVaccines
Related
Health
New blood types are often discovered following medical disasters
New blood types are regularly discovered by an unusual absence or an unusual presence — both of which can result in tragedy.
Neuropsych
How you breathe affects your brain
Your breathing rhythm influences a wide range of behaviors, cognition, and emotion.
Health
COVID, RSV and the flu: A case of viral interference?
Viruses, it turns out, can block one another and take turns to dominate.
Health
Chantix, Trulicity, Xeljanz, and most drugs advertised on TV are of “low therapeutic value”
Close to 70% of drugs advertised on TV offer little to no benefit over other cheaper drugs.
Neuropsych
Shopping with your nose: How body odors influence your buying behavior
Sniffing out a deal.
Up Next
Health
A new study shows the neurological reason for obesity and how to combat it
It’s all about the feeding window.