It may be a family member, a friend, a coworker, or even yourself, but chances are breast cancer will invade your life at some point. According to the Center for Disease Control and Prevention, 242,476 new cases of female breast cancer were reported in 2015 alone. The disease took the lives of 41,523 women that same year. This makes breast cancer the most commonly diagnosed cancer, and the second leading cause of cancer deaths among American women.

Worldwide, cancers represent the second leading cause of death, surpassed only by heart disease. Yet despite these disheartening numbers, we are making progress in developing effective treatments against this deadly affliction.

Scientists may have given us another tool to further this progress. They’ve developed a new drug therapy that prevents malignant cancer growth. How? By turning cancer cells into fat. 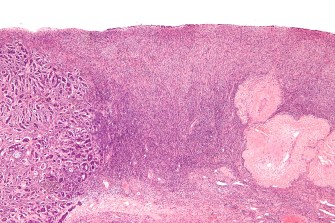 Low magnification micrograph of a metastatic tumor [left side] in the ovary. This tumor metastasized from a tumor in the woman’s breast. Photo credit: Wikimedia Commons

The good kind of fat

Metastasis is the leading cause of death from cancer, occurring when cancer cells separate from the original tumor to proliferate elsewhere. These new cancer cells travel through the bloodstream or lymphatic system. Since these bodily systems are thoroughly connected, cancer can spread to a variety of locations. Breast cancer, for example, “tends to spread to the bones, liver, lungs, chest wall, and brain.”

Cancer cell plasticity — an ability that allows cancer cells to shift physiological characteristics dramatically — fosters metastasis and is responsible for cancer’s resistance to treatments. To combat its resistance, researchers at the University of Basel in Switzerland decided to turn cancer’s cellular plasticity against itself. They used Rosiglitazone, an anti-diabetic drug, along with MEK inhibitors in mice implanted with breast cancer cells. Their aim was to alter the cancer cells.

The drug combination hijacked the breast cancer cells during epithelial-mesenchymal transition (EMT), a process by which the cells undergo biochemical changes. EMT plays a role in many bodily functions, such as tissue repair. In unaltered cancer cells, EMT allows them to migrate away from the original tumor while maintaining their oncogenic properties.

But in cancer cells assaulted by the new drug therapy, EMT changes them into adipocytes, or fat cells. Like normal fat cells, these former breast cancer cells were both functional and post-mitotic, meaning they could no longer divide and proliferate.

While the therapy did not alter the original tumor, it did prevent new cancer cells from dividing and spreading elsewhere in the body. This repressed metastasis in the researcher’s preclinical trials.

The researchers published their findings on January 14 in the journal Cancer Cell.

“In future, this innovative therapeutic approach could be used in combination with conventional chemotherapy to suppress both primary tumor growth and the formation of deadly metastases,” senior study author Gerhard Christofori told Medical News Today.

Since the research used FDA-approved drugs to study the treatment’s effects, the study notes, “a clinical translation may be possible.” 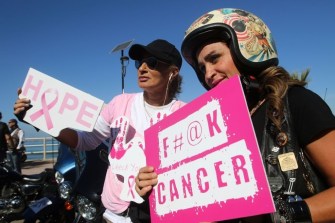 Will we win the battle against cancer?

This article opened with some fearful figures about cancer and its effect on people worldwide. But there’s reason to hope.

While the total number of new cancer cases and deaths continues to increase, the rates of cancer diagnoses and deaths decline each year — as absolute figures don’t account for rises in life expectancy, population growth, or aging populations. We’ve made great strides in understanding the disease and its various genetic and environmental origins. And events like Breast Cancer Awareness Month continue to educate the populace about the preventative measures available to them.

Thanks to scientists like those at the University of Basel in Switzerland, we may have more reasons to be hopeful very soon.

Will nature or nurture win out?
Health

An experiment in rats suggests that gene editing may be a treatment for anxiety and alcoholism in adults who were exposed to binge-drinking in their adolescence.
Up Next
Starts With A Bang

During the total lunar eclipse of July 28, 2018, nearly the entirety of the Americas experienced daytime and couldn’t see any of it at all. Six months later, the January […]