Humans are way better at detecting and avoiding sick people than previously thought. So good, in fact, that our brains can detect disease in others before it even breaks out.

A new study from researchers at the Karolinska Institutet in Sweden shows that our brains use sight and smell to detect subtle cues in others that signal latent and manifest disease. What’s more, we actually act on these cues to avoid infection as part of our survival instinct.

In the study, researchers exposed one group of participants to a small amount of harmless bacteria. This activated the immune response in participants and caused them to briefly develop symptoms of the disease like fever, pain and tiredness. During this time, researchers photographed the temporarily infected participants and took samples of their body odor.

A second group was presented with the body odor samples and photographs of the sick participants, along with those of healthy people for control, and was asked to rate each individual based on perceived health, attractiveness and desired social interaction with them. Using only the photographs and smell samples for reference, the second group demonstrated a statistically significant ability to detect people with latent disease and perceive them less favorably.

“Our study shows a significant difference in how people tend to prefer and be more willing to socialize with healthy people than those who are sick and whose immune system we artificially activated,” said study author Mats Olsson, a professor at Karolinska Institutet’s Department of Clinical Neuroscience. “We can also see that the brain is good at adding weak signals from multiple senses relating to a person’s state of health.”

Still, our innate sense of pathogen avoidance is complex and social factors seem to also play a big role in determining how we avoid sick people.

“Common sense tells us that there should be a basic behavioral repertoire that assists the immune system,” said Olsson. “Avoidance, however, does not necessarily apply if you have a close relationship with the person who is ill. For instance, there are few people other than your children who you’d kiss when they have a runny nose. In other words, a disease signal can enhance caring behavior in close relationships. With this study, we demonstrate that the brain is more sensitive to those signals than we once thought.”

Want to see how sensitive your brain is to those signals—er, to the visual ones at least? Look at these photos of a study participant and pick the one in which she’s sick. 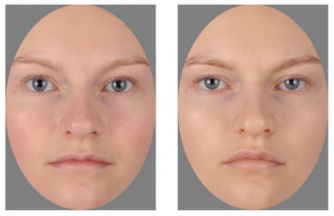 A new device cured the hiccups 92 percent of the time in a recent study involving more than 200 participants.
Health

“The question is which are okay, which are not okay.”
▸
14 min
—
with
Big Think
The Present

A team of scientists managed to install onto a smartphone a spectrometer that’s capable of identifying specific molecules — with cheap parts you can buy online.
Health

For every good idea in evolution, there is an unintended consequence. Disease is often one of them.
Life

A newly discovered coronavirus — but not the one that causes COVID-19 — has made some dogs very sick.
Up Next
The Present

Elon Musk and many top CEOs condemned President Trump’s decision to pull out of the Paris Agreement on climate change.