We knew it was coming. We just weren’t sure how it would manifest. Thanks to a series of academic papers by researchers at the University of the Sunshine Coast in Queensland, Australia, the future is becoming clear.

For all the talk about the utopia technology is preparing us for, we consistently overlook the physical consequences. Futurists wax poetic about transcending our meat puppets, but as any credible evolutionary biologist or neuroscientist will remind you, consciousness is body-dependent. The tools we use to push forward into a brave new age are weighing us down—literally.

The researchers—David Shahar and Mark G.L. Sayers, both at the School of Health and Sport Sciences in Queensland—noticed that this trend of “horns,” rather large bone spurs growing at the back of people’s skulls, is more prevalent in young people than older adults.

In a paper published earlier this year in Scientific Reports, they observed hornlike spikes growing in the back of people’s skulls that are 10-31mm in length. Shahar notes that bone spurs are considered large if they measure 3-5mm in length. The problem, he continues, is not necessarily the spurs, but the havoc they wreak in the person’s skeletal system.

Could Tech Neck be the Cause of your Headaches or Neck Pain?

Could Tech Neck be the Cause of your Headaches or Neck Pain?

Every technology comes with consequences. Electric light bulbs were an important step forward, but we’re paying for it with chronic sleep deprivation. We’re well aware of how cars and industrial farming affect climate change; even the technology of plastic is waging war on innumerable marine species. And us, as we all eat thousands of plastic particles each year.

Three years ago, Shahar and Sayers noticed a troublesome sight in neck X-rays. Enthesophytes, bone spurs protruding from the base of the skull—you can feel them if you check—were appearing in younger patients. Previously seniors that had suffered a lifetime of strain comprised the population for this problem. The team’s first paper, published in 2016, noted that 41 percent of young adults studied (out of 218 X-rays) had noticeable bone growth. 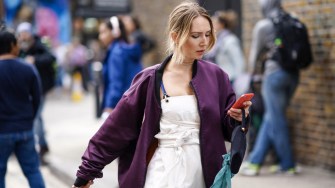 They followed this up with a paper last year, arguing that genetics are not the cause. The skeletal load from staring down at a screen is now an evolutionary trait this technology is causing. Of course, evolution is not necessarily for our benefit. We usually reserve the term for things we like, yet it has no regard for our benefit. (Due to rapidly increasing climate problems, for example, jellyfish might inherit the Earth.)

In their latest paper, Shahar and Sayers note that 33 percent of the population (out of 1,200 X-rays) now exhibits enthesophytes. This postural deformity results in chronic headaches and upper back and neck pain.

The idea that people will stop using their phones is unlikely. Instead, we’ll turn into a new species: Horned humans. Shahar says the solution will require a public health effort akin to dental hygiene in the 1970s. He suggests nightly postural training to counter the effects of our head tilts. The difference, of course, is that flossing and brushing is an adaptation to eating, a biologically necessary practice. Staring at a phone for six hours a day is not.

As a fitness instructor, I’ve spent decades inside of gyms. Long ago I predicted a severe uptick in kyphosis in the younger generation due to the constant hunching forward of their upper bodies. More than three million Americans are treated for this signature rounded back every year, which is usually caused by a lifetime of bad postural habits and lack of mobility training.

Just this morning I observed at least half of the gym members occupied by their phones while exercising: on bicycles and treadmills, between sets while weight training, staring down into some distractive video while on the stretch mats. If phones are in such demand during a time when focus is demanded, we can be certain these bad habits continue throughout the day: walking out of the gym, driving, lying in bed at night. Smartphones constitute the greatest addiction we’ve decided to pretend doesn’t exist as a society.

Like sucking carbon out of the air or burying it into the ground, we’d rather create workarounds to bad habits than actually address the problem. We’ve come nowhere close to admitting this addiction, so the notion of addressing it is moot. We can imagine a better future, yet in the end, our anatomy is slave to the demands of our brains.

Tags
addictionhealthhuman bodymedical researchpublic healthtechnology
In this article
addictionhealthhuman bodymedical researchpublic healthtechnology
Related
Health
How saliva changes the flavor of food
“It’s a liquid, but it’s not just a liquid.”
Health
New blood types are often discovered following medical disasters
New blood types are regularly discovered by an unusual absence or an unusual presence — both of which can result in tragedy.
Neuropsych
How you breathe affects your brain
Your breathing rhythm influences a wide range of behaviors, cognition, and emotion.
Health
COVID, RSV and the flu: A case of viral interference?
Viruses, it turns out, can block one another and take turns to dominate.
Neuropsych
Shopping with your nose: How body odors influence your buying behavior
Sniffing out a deal.
Up Next
The Present
Facebook finally unveils its cryptocurrency. What we know about Libra so far.
Facebook was careful to say that Libra is not maintained internally and is instead serviced by a non-profit collective of companies.