Humans were born to run, as journalist and running fanatic Christopher McDougall phrased it. Bipedalism offers many advantages over quadrupeds, including the ability to better communicate over longer distances and improved cardiovascular skills. Humans are relatively lackluster over short distances; since our organs don’t crash into our lungs when we run, as they do with quadrupeds, we are master marathoners.

There are still trade-offs. Thanks to our upright posture, we have weak necks—misbalances in our ankles and knees often lead to neck problems. Further down the chain, running can lead to chronic knee problems and labrum tears; I’ve suffered both while training for half-marathons. The impact force of repetitive striking can result in chronic lower back problems, especially if runners don’t stretch and practice mobility routines. We expend a lot of energy when running; our body pays the toll.

Still, running is a natural activity that, according to McDougall, excite evolutionary senses of fear and pleasure deeply embedded in our biology. Too bad our anatomy doesn’t always agree.

Researchers have long sought new means for alleviating energy output while running. A fascinating new study on exoskeleton emulators, published in the journal Science Robotics, might have gotten us one step closer.

When McDougall’s book was published in 2009, more Americans were running. As the researchers (based at Stanford but including experts from Carnegie Mellon, Ghent University, and Nike) in this new study note, only 25 percent of Americans aged 18-29 reported running even once in 2018. Participation for adults aged 30-49 dropped 20 percent that year. They cite time commitments and negative associations to exercise as two leading causes. Given the high likelihood of injury due to running, it makes sense that there’s hesitancy.

Mindset matters. Running is a birthright and offers great cardiovascular conditioning. Yet there has to be some excitement around it. As McDougall writes, “if you thought [running] was only a means to an end—an investment in becoming faster, skinnier, richer—then why stick with it if you weren’t getting enough quo for your quid?”

You have to love running to dedicate yourself to it. If you’re in pain, that’s a tall order.

The researchers tested two modes of running assistance: motor-powered and spring-based exoskeletons. An exoskeleton is an external skeleton that supports an animal’s body, such as insects and mollusks. In human terms, they are expensive devices designed to slow down fatigue. In this study, ankle exoskeletons were tethered to motors as volunteers ran on a treadmill.

Eleven competitive runners were divided into three groups: an “optimized power” group, the motor-based cohort that boosted the runners’ strides; “optimized spring-like,” the group wearing the exoskeleton sans motor power; and the control group, “zero torque mode,” runners wearing an exoskeleton with none of the features initiated. A final control element was runners wearing a neutral running shoe with no exoskeleton. 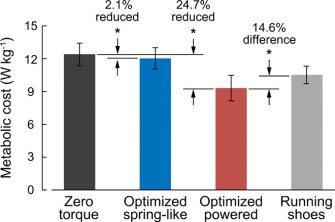 The motors are an important component. Wearing an exoskeleton with the motor switched off actually increased physical demand by 13 percent. With the motors purring, the demand was 15 percent less than when running without an exoskeleton.

Spring-based exoskeletons did not fare nearly as well, as it increased energy output by 11 percent than running without the gear. Stanford’s Steve Collins, lead author of the paper, was surprised by this result, noting,

“When people run, their legs behave a lot like a spring, so we were very surprised that spring-like assistance was not effective. We all have an intuition about how we run or walk but even leading scientists are still discovering how the human body allows us to move efficiently.” 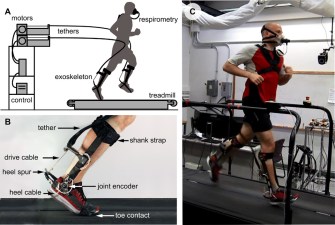 (A) Exoskeleton emulator testbed. A participant runs on a treadmill while wearing bilateral ankle exoskeletons actuated by motors located off-board with mechanical power transmitted through flexible Bowden cables. (B) Ankle exoskeleton. The ankle exoskeleton attaches to the user by a strap above the calf, a rope through the heel of the shoe, and a carbon fiber plate embedded in the toe of the shoe. The inner Bowden cable terminates on a 3D printed titanium heel spur that is instrumented with strain gauges for direct measurement of applied torque. A magnetic encoder measures ankle angle. (C) Participant running on the treadmill with bilateral ankle exoskeletons. Metabolic data are collected through a respiratory system by measuring the oxygen and carbon dioxide content of the participant’s expired gasses.

On the plus side, spring-based exoskeletons are much cheaper than motor-based models. The researchers are hoping to design a more energy-efficient model. Motor-powered models work great when tethered to treadmills but are unrealistic for road and trail runners, so an affordable spring-based version would be a boon for outdoor runners.

Spring-based exoskeletons mimic the natural spring of running. As with our normal running pattern, it stores energy only to unleash it when pushing off from the toes. With the help of a motor, the foot is able to extend at the ankle at the end of the step. Not quite Iron Man, but as Stanford graduate student Delaney Miller says of these trials,

“Powered assistance took off a lot of the energy burden of the calf muscles. It was very springy and very bouncy compared to normal running. Speaking from experience, that feels really good. When the device is providing that assistance, you feel like you could run forever.”

Collins says this is one of the biggest improvements in energy economy ever made in running. It will likely not affect pro marathoners that much, but for novice runners or those susceptible to injury, it could ease the pain and remove a few seconds from your mile time.

Yes, humans were born to run. As it turns out, some of us just do it a little better with assistance. If consumer-priced exoskeletons hit the market, the statistics on running enthusiasts might swing in an upward direction. If the result is decreased energy expenditure, which by extension lowers the risk of injury, it’s a win for all of us bipeds.

Virtually all the statistical methods researchers commonly use assume potential mating partners decide who they will have children with based on a roll of the dice.
The Future

Bend it. Stretch it. Use it to conduct electricity.
Neuropsych

It’s not just for Earth-like planets around Sun-like stars. Not even close.Shortly after Earth first formed first formed, life quickly took hold, thriving ever since.Both reflected sunlight on a planet and […]