It is perhaps fitting that just as McDonald’s introduces meatless burgers, a new study, published in the journal, Annals of Internal Medicine, is overturning years’ worth of dietary recommendations that we eat less red meat. Not that everyone is taking the study as the final word, however.

A panel of fourteen researchers and three community members from seven countries (reporting no conflicts of interest), directed by Dalhousie University epidemiologist, Bradley Johnson, studied 61 articles on all-cause mortality that included a total of four million participants. The team also reviewed dozens of trials linking red meat to cancer, heart disease, and mortality. The team concluded that the evidence between red meat, both unprocessed and processed, and health problems is “low to very low.”

The study took three years to complete. Researchers from a range of cultures were included to ensure diversity of thought, while each professional was vetted for perceived conflicts of interest. When considering both processed and unprocessed red meat, 11 researchers voted for adults (age 18 and over) to continue eating recommended allowances and not cut down. In each study, three researchers offered a “weak recommendation” for reducing intake.

For the record, the average American adult consumes an average of 4.5 servings of red meat per week.

Organizations such as The American Heart Association and the American Cancer Society immediately came out against the study, with some groups suggesting that the journal withhold publication. They believed that not only would this information contradict years of findings, but it would “erode public trust in scientific research.”

To be fair, that’s the nature of science: If evidence overturns pre-existing norms, that evidence should be considered. However, we need to take a more holistic look at this picture.

Gut Bacteria and Red Meat: Highlight from Cancer and Diet

Gut Bacteria and Red Meat: Highlight from Cancer and Diet

Nutrition science is tricky. Not only do self-endowed “life coaches” and fitness trainers not certified in nutrition offer unsolicited advice, actual scientific bodies find it hard to come to conclusions. One of the biggest issues: It’s nearly impossible to isolate macronutrients or entire classes of food given their interactions with all the other food you consume. A burger doesn’t have the same effect on your body as a burger with mayonnaise on a bun; whether you drink water or soda to accompany that meal matters too.

The main contention comes from the type of analysis the researchers used. As Harvard nutrition scientist, Frank Hu, says, the GRADE systematic approach was introduced for evaluating drug trials, not nutrition science. Alongside his colleagues, Hu published an article countering the results of the meta-analyses, coming to four conclusions: 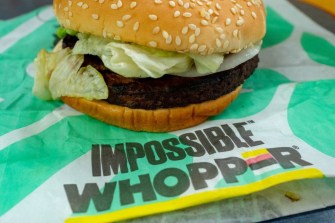 As with many topics in American discourse, our diet has become polarized. Those that claim that humans were not designed to eat meat are ignorant of how our biology (and cultures) evolved. As primatologist Richard Wrangham writes, the greatest culinary advancement in history was fire. Cooking made nutrients available much more quickly—a burger on a grill is more nutritious than chewing on raw meat. And meat is something our ancestors definitively ate whenever they could.

What also doesn’t help is a sentiment that has been batted around the holistic blogosphere: that meat is toxic. To be fair, growth hormones and factory farming have increased the potential for toxicity in our food supply. But meat itself is not inherently toxic to our digestive system. As Harvard paleoanthropologist, Daniel Lieberman, writes, given our ancestors’ adaptation to diverse climates, there is no “optimal diet.” We ate what we could source. That said, meat consumption offered a particularly important boon to our biology.

“By incorporating meat in the diet and relying more on food processing, early Homo was able to spend much less energy digesting its food and could thus devote more energy toward growing and paying for a larger brain.”

Yet that doesn’t mean we need to eat meat, at least not as much of it was we do. Beyond sating our biological impulse, industrial agriculture—specifically, beef and dairy production—is one of the biggest drivers of climate change. Beef is extremely taxing on the environment, much more so than chicken or pork agriculture.

From a climate perspective, plant-based diets are less taxing, though you often run into the problem of nutrient loss due to monocropping. Plant-based burgers might be all the rage, but that also doesn’t mean they’re healthy, which brings into question whether or not it makes sense to sacrifice personal health for a perceived environmental gain.

An easy answer? Not here.

One thing is clear: The current rate of beef production is unsustainable. Whether or not 4.5 servings of red meat will increase your risk of cancer or heart disease might remain a source of contention. But a more important question remains: If reducing your meat intake is better for the environment (and therefore everyone’s health), isn’t that a wiser decision to make?

“Lac-Phe” grants obese mice the benefits of exercise — without exercising. But don’t expect an “exercise pill.”
Up Next
Starts With A Bang

Is The Universe Filled With Black Holes That Shouldn’t Exist?

As viewed with our most powerful telescopes, such as Hubble, advances in camera technology and imaging techniques have enabled us to better probe and understand the physics and properties of […]