Psychedelics research is enjoying a renaissance. In recent years, studies have shown that hallucinogenic drugs like LSD, psilocybin, and MDMA seem to have powerful therapeutic effects on conditions including major depression, anxiety, and addiction disorders.

One unique aspect of psychedelics is that taking a single moderate dose can yield long-lasting therapeutic benefits for people with certain conditions, such as cancer patients with depression and anxiety.

Now, new research published in Neurotherapeutics suggests these outsized benefits may also apply to people with migraines. The evidence is preliminary but promising, and it could open up new areas of research for treating migraines, which are often chronic and debilitating.

Migraine affects more than 10 percent of the U.S. population and it’s ranked as the world’s sixth most debilitating illness. Treatments can alleviate migraine symptoms, but efficacy varies from person to person, and even treatments that do work sometimes produce unpleasant side effects. There’s currently no cure for the condition.

“Put your finger on your temple and imagine drilling it inside your head,” a 29-year-old woman named Heather once told Prevention. “My migraines feel like a screwdriver in there, in that one spot, always on my left side and in my left eye. I get a burning sensation throughout my body and in my jaw. Everything becomes sensitive to the touch, like my muscles are on fire.”

Migraine treatments can be either preventive or abortive, and they range from prescription drugs, to over-the-counter medications like Advil Migraine, to home remedies like yoga or taking a hot shower. Psychedelics are another sort of home remedy. For decades, anecdotal evidence has suggested that drugs like LSD and psilocybin may help prevent or alleviate migraines, possibly because they’re pharmacologically similar to migraine medications like dihydroergotamine, noted the researchers behind the new study.

To put that anecdotal evidence to the test, the researchers designed a placebo-controlled study in which they gave migraine sufferers a moderate dose of pure synthetic psilocybin. The participants included seven women and three men, all adults, who regularly suffered at least two migraines per week. All participants were free of any serious psychiatric or medical diseases and hadn’t abused drugs within three months prior to the study.

To track migraine activity, the participants documented their headache attacks in a journal for six weeks, starting two weeks before the study and stopping two weeks after. The study was divided into two sessions, one of which involved taking a small dose of pure synthetic psilocybin.

“In the first experimental session, all subjects received an oral placebo capsule, and in the second experimental session, all subjects received an identically appearing oral psilocybin capsule,” the researchers wrote. “In this design, each subject acted as his own control and placebo was given first so that the potential long-term effects of psilocybin, if given first, would not interfere with placebo treatment, if given second.” 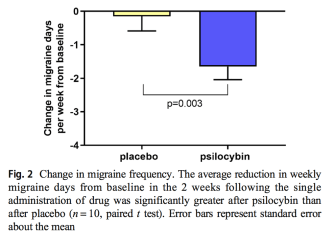 In the hours after each session, the participants answered questions about any psychedelic effects they might have been experiencing. No participants reported any adverse effects.

In the two weeks after taking the psilocybin, most participants did report significant decreases in migraines compared to baseline and the placebo session.

Interestingly, these reductions weren’t correlated with how strongly the participants felt the psychedelic effects of psilocybin. That suggests migraine sufferers don’t need to take a large dose of psilocybin and therefore experience its intense and potentially unpleasant hallucinogenic effects to reap the benefits from it.

But perhaps most promising was that the therapeutic effects lasted at least two weeks after a single dose, differentiating psilocybin from other migraine medications that need to be taken regularly. Still, the researchers noted more research is needed:

“While encouraged by the findings in this exploratory study, before this approach could be used clinically, it is imperative that additional controlled investigations be completed in order to understand psilocybin’s full capacity to suppress migraine, as well as its long-term safety and tolerability. To verify the present findings, it will be necessary to replicate the results of this study in a larger sample under a fully randomized design. Studies with a dose range will inform on whether the effects of psilocybin in migraine are dose dependent.”

Deaths of despair are skyrocketing in the U.S., while at the same time, they are falling in other wealthy countries. What are we doing wrong?
Videos

Branding isn’t buzz — we’ve been doing it for thousands of years.
▸
6 min
—
with
Debbie Millman
Up Next
Neuropsych

Dreams are weird. According to a new theory, that’s what makes them useful.