In 1928, Alexander Fleming had just returned from vacation to his disorderly laboratory when he discovered he had made a mistake. He had been researching the bacteria Staphylococcus and had accidentally left one culture uncovered, exposing it to the environment of his laboratory and compromising the culture. The culture appeared to be covered in a fungus that had destroyed the bacterial colonies in its immediate proximity. Investigating further, he discovered the fungus had released what he initially called “mold juice.”

Later, he would call this substance penicillin after the fungus’s genus, Penicillium. This marked the start of the antibiotic era.

Bacteria had been the cause of many different forms of human suffering, so the discovery of a substance that could suddenly cure scarlet fever, meningitis, pneumonia, and other diseases was met with wild enthusiasm. Unfortunately, we became a little too enthusiastic.

We distributed penicillin and other antibiotics, such as tetracycline and erythromycin, to soldiers, sick civilians, livestock, and often to people who were sick with viruses or other conditions unrelated to bacteria. It was only in 1944 that we first uncovered strains of Mycobacterium tuberculosis that could resist antibiotics.

It took some time afterwards for the scientific community to fully accept that our overuse of antibiotics was “teaching” bacteria to defend against it. They were evolving to release chemicals that inactivated the antibiotic, learning to pump antibacterial chemicals outside of their cell walls, changing their structures, and developing a variety of other defense mechanisms.

Bacteria are simple, prolific, and therefore evolve quickly, and pretty soon medical texts began to issue this piece of advice: “The first rule of antibiotics is try not to use them, and the second rule is try not to use too many of them.” 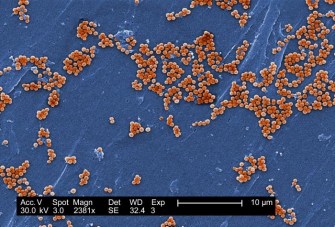 But we still overuse antibiotics all the time. In fact, the CDC estimates that 154 million antibiotic prescriptions are issued each year, and a full 30 percent of those prescriptions are unnecessary. They’re simply too useful not to deploy under the right conditions. Now, new superbugs are emerging that are completely or mostly resistant to antibiotic treatment, meaning many of the ills that once plagued humanity could return in force. What are we going to do about this?

There are a few methods that may help us contend with this new challenge, but one of the most promising fields of research is phage therapy. Bacteriophages (or just phages) are viruses that specifically target bacteria, though viruses as a whole target a variety of different cell types. Generally, viruses cause a great deal of trouble for people: they give you colds, the flu, chickenpox, herpes, and other diseases. Bacteriophages, too, can target the helpful bacteria that humans need to go on living a healthy life.

Phages look like creepy, cyborg spiders for the most part. The kind of phage we’re interested in— lytic phages — land on the surface of a cell, bind to receptors on the its membrane, inject their own DNA or RNA, and hijack the cell’s own machinery to make more of itself until the whole cell bursts. Then, the cycle repeats. Think of a much smaller version of the facehugger from the Alien franchise. Fortunately, some kinds of these killers specialize in assaulting the harmful bacteria that makes us sick. 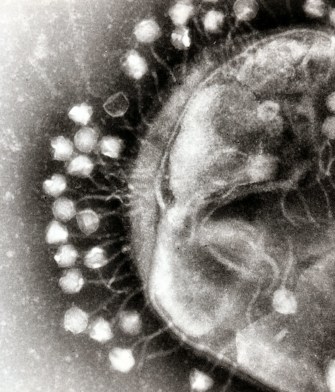 The benefits of phage therapy

Phages only hunt the particular species of bacteria they can bind to, which makes them infinitely more targeted than antibiotics. An antibiotic kills indiscriminately, even killing the bacteria that may be strengthening the immune system, promoting gut health, or doing some other kind of important work for us. A phage that targets, say, Staphylococcus, will only kill Staphylococcus.

They also evolve, just as bacteria do. Phages may be able to develop new strategies of attack to overcome bacteria’s new strategies of defense. In contrast, once a bacterium learns to defend itself against antibiotics, that antibiotic ceases to work. In the future, we may even be able to genetically modify phages to more effectively combat bacteria.

Just as antibiotics come with a downside, so too does the use of phages to treat bacterial infections. For one, phages can accidentally provide bacteria new genes and new capabilities. Essentially, some phages destroy their host cell (called lytic phages), while others insert themselves in the host cell’s genome (called lysogenic phages), leaving the bacterium relatively unharmed but copying itself into all the genomes of that bacterium’s offspring.

Because this second class of phages hijacks the bacteria’s DNA, they can accidentally introduce new genes that code for undesirable properties, such as greater bacterial virulence. Laboratory studies have shown that these phages can take harmless bacteria and turn them pathogenic, causing diphtheria, cholera, and potentially other diseases. While we would avoid using lysogenic phages in practice, filtering them out would add to the cost and effort involved, and there’s some concern that a phage that was lytic in the lab could become lysogenic in the body. And even lytic phages can accidentally pick up bits of its host bacteria DNA, spreading them to new bacteria with unpredictable effects.

There’s also a logistical issue that arises from one of phage therapy’s benefits: specificity. In order to treat an infection, there would need to be multiple strains of phages on hand to treat the multiple strains of bacteria in an infected patient — burn wounds, for instance, are often rife with a wide variety of infectious bacteria. To be ready for any kind of infection, large phage “banks” would need to be developed holding a variety of different phage strains. Due to the rapidly evolving nature of the microbial world, these banks would also need to be consistently updated to combat emerging local strains of bacteria.

But the biggest challenge may lie in regulation and marketing. Because phages can evolve so rapidly, going through a thorough vetting procedure for each new version of a phage-based treatment could paralyze the regulatory process. What’s more, patent laws don’t really have an answer for phage therapy, and it will be difficult for any company to make money off of them — no profit means no investment, and no investment means no research. And finally, phages are plain creepy: it’s going to be difficult to persuade intractable parents that the best cure for their child is to inject them with viruses.

So, will we begin curing all our incurable diseases with cocktails of viruses? Probably not anytime soon. With enough time and research, the challenges listed above can likely be overcome, and even if they cannot be overcome entirely, certain limited applications will be (and already are) deployed. It may not be a one-size-fits-all solution to antibiotic resistance, but it’s at least another arrow in our quiver.

Tags
bacteriabiologydiseasednamicrobiologypublic healthvirus
In this article
bacteriabiologydiseasednamicrobiologypublic healthvirus
Related
Thinking
Lobsters don’t die from old age — they die from exhaustion
Being mortal makes life so much sweeter.
Health
Food expiration dates don’t have much science behind them
A food safety researcher explains another way to know what’s too old to eat.
The Present
Five key findings from the 2022 UN Population Prospects
Explore the key highlights from the UN’s latest release of its world population estimates.
Health
Sepsis still kills 1 in 5 people worldwide
Two ICU physicians offer a new approach to stopping it.
The Learning Curve
What is technology addiction? (And how you can better manage it)
To reap the benefits of digital technologies, we must contend with their addictive designs.
Up Next
High Culture
The WWE’s newest bad guy? A vegan who hates capitalism and consumerism.
Daniel Bryan is a “heel” who might sincerely believe in some of the things his persona is known to say.