Three paralyzed men are walking again in Switzerland with the help of a team at the École Polytechnique Fédérale de Lausanne. The innovative rehabilitation process the trio went through is now being studied to mimic its results for others in similar circumstances.

In terms of the treatment, the men first walked on a treadmill while being supported by a gurney-like device as they received jolts from sensors that were placed on their legs and feet. They then left the treadmill and walked across the ground while still receiving electric stimulation. A few months later, they were able to regain their ability to walk without the assistance of any sort of electrical stimulation whatsoever.

It’s worth breaking down some of the details that went into each stage of the process: on the treadmill, for instance, participants adjusted the elevation of their step, the speed of their stride, and were asked to see if they could stop moving their legs even though they were receiving electrical stimulation. They then walked on the treadmill for an hour. They then did this activity for three months, participating in rehab 4–5 times per week. After this time, they were then able to walk hands-free without the ‘hip assist’ provided by the gurney-like device.

One of the curiosities that occurred during this process was the discovery that intermittent stimulation works. Continuous electric stimulation of the spinal cord, on the other hand, enabled rats to walk again, but it didn’t have the same results in humans. Indeed, when it was used on the participants, they reported a loss of sensory awareness as to where their limbs even were. This appears to be explained by the fact that areas of the body that contain a single motor neuron seem to respond more effectively to low-grade stimulation than a continuous loop.

The results described here don’t represent a blanket cure for paralysis. It’s worth noting, for instance, that each stimulation of the spine was personalized to the three participants. The scientists at Lausanne created “an atlas of motor neuron activation maps” using a combination of MRI scans and CT scans.

But that doesn’t make the results here any less impressive, noteworthy, or inspiring. As reported by the BBC, one of the doctors noted one of the patient’s determination to succeed —

“I came with my daughter, Charlotte, who was one month old at the time. As we approached David, he looked her in the eye and said, ‘I will walk before you’.

“When Charlotte took her first step she was 14 months old, by which time David was walking by Lake Geneva.

The study, which was published in Nature, can be read in full here. 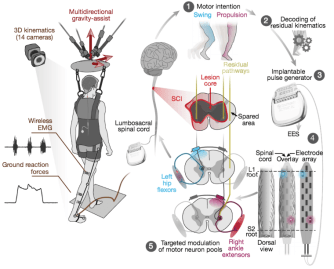 Caffeine does something, but it’s not clear exactly what.
Up Next
Hard Science

The concept was likened to a porch light in our little neighborhood of the galaxy.