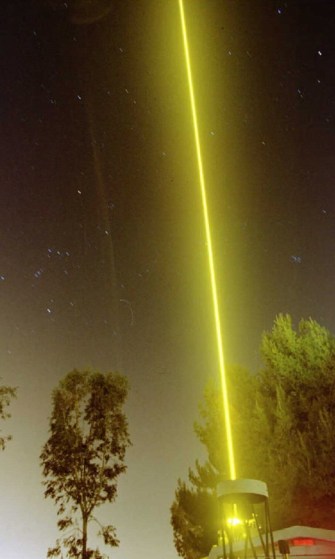 An Avlis copper/dye laser emits a laser beam guide star into the night skies behind a telescope at the Lawrence Livermore National Labratory in Livermore, California 12 January. Scientists from the US and France sent the beam skyward during a series of experiments to attempt to refine technology for astronomical observation.

A new article by researchers at Massachusetts Institute of Technology was just published in The Astrophysical Journal, and it’s proposing that humans can build a laser capable of effectively sending out beams to various locations—a relatively close proximity, granted—that would create enough of an anomaly in the light signals that are already broadcast by our own Sun that an intelligent alien civilization could see it and go… wait, what?!

Potentially, the laser beams could reach up to 20,000 light years away.

“If we were to successfully close a handshake and start to communicate, we could flash a message, at a data rate of about a few hundred bits per second, which would get there in just a few years,” said James Clark, graduate student in MIT’s Department of Aeronautics and Astronautics and author of the study.

In the MIT article announcing the “feasibility study,” the concept was likened to a porch light in our little neighborhood of the galaxy.

It’s possible to accomplish, according to MIT, and it could create a tantalizing reality in which communication lines can be established with said civilization, once found. 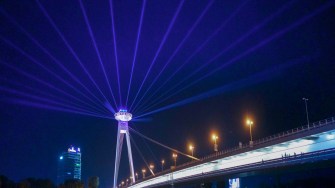 It gets even more interesting if we happen upon aliens who understand what it is, and then, basically “talk back” using similar methods of communication; using lasers, we can establish a channel capable of 2mbps speeds. In other words, a somewhat slow but still capable Internet connection. Think basic DSL type of data transfers. 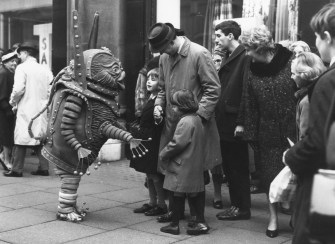 9th January 1964: An actor wearing a sculpted ‘Martian’ costume approaches a curious crowd whilst taking a break from a theatre production of ‘The Man in the Moon’.

Of course, the communication line itself has to be established first, and that could take decades or even centuries.

From the paper: “While the probability of closing a handshake with even a nearby extraterrestrial intelligence is low with current survey methodologies, advances in full-sky surveys for SETI and other purposes may reduce the mean-time-to-handshake to decades or centuries, after which these laser systems may close links at data rates of kbps–Mpbs.”

Although we can be looking for similar signals from within 20,000 lights years, the problem is that unless they’re lasers on the infrared spectrum, they’re very hard to detect. That’s a key reason that this paper was written; the author says he hopes it will spur infrared imaging techniques that would improve the chances of us detecting signals such as what he proposed.

“With current survey methods and instruments, it is unlikely that we would actually be lucky enough to image a beacon flash, assuming that extraterrestrials exist and are making them,” Clark says. “However, as the infrared spectra of exoplanets are studied for traces of gases that indicate the viability of life, and as full-sky surveys attain greater coverage and become more rapid, we can be more certain that, if E.T. is phoning, we will detect it.” 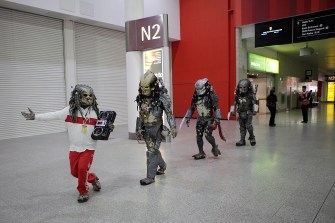 A troop of alien characters dance through the Excel Centre at the London Super Comic Convention on March 15, 2014 in London, England.

The question of whether it’s actually wise to be broadcasting laser beams around our galaxy still remains to be debated, however. And, for that matter, the concept of reaching out and trying to contact aliens is up for hot discussion.

For example, in 2010, Stephen Hawking suggested we might not want to let an alien civilization know we are here, thinking they might have consumed all resources they can find and wish to locate other planets to gather even more from.

“Such advanced aliens would perhaps become nomads, looking to conquer and colonize whatever planets they could reach,” Hawking said. “If so, it makes sense for them to exploit each new planet for material to build more spaceships so they could move on. Who knows what the limits would be?”

And then there’s Kurt Vonnegut, Jr., in his novel, Breakfast of Champions. I’ll not assume I can summarize it better than the man himself, but it’s another example of what might happen should aliens contact us in a more direct fashion:

A flying saucer creature named Zog arrived on Earth to explain how wars could be prevented and how cancer could be cured. He brought the information from Margo, a planet where the natives conversed by means of farts and tap dancing. Zog landed at night in Connecticut. He had no sooner touched down than he saw a house on fire. He rushed into the house, farting and tap dancing, warning the people about the terrible danger they were in. The head of the house brained Zog with a golfclub.”

Why Michio Kaku wants to avoid alien contact at all costs

Tags
cosmosextraterrestrial lifesciencespacetechnology
In this article
cosmosextraterrestrial lifesciencespacetechnology
Related
Life
“I went to space and discovered an enormous lie”
What astronaut Ron Garan saw in space changed his life forever – here’s what it taught him.
▸
8 min
—
with
Ron Garan
Why geniuses hunt demons for sport
Jimena Canales shares the “demons” that shaped computer science.
▸
6 min
—
with
Jimena Canales
The Well
The 3 “demons” that haunted legendary scientists
Darwin, Descartes, and Maxwell all believed in these science ‘demons.’
▸
7 min
—
with
Jimena Canales
Harvard professor debunks the biggest exercise myths
Exercise culture is crazy. But what you need to do is exceedingly simple.
▸
with
Daniel Lieberman
Videos
The true story behind Carl Sagan’s cult classic, Contact
Do aliens dream about meeting us, too?
▸
with
Jill Tarter
Up Next
Health
Tall people may be more at risk for skin cancer, new research suggests
Why? Because you have more cells, the researchers say.