Amyloid beta plaques are gooey globs that clump together, stick to neurons inside the brain and kill them off, outright. The slow but steady accumulation of these plaques leads to Alzheimer’s disease. Tau protein tangles aid them by cutting off the brain’s supply lines, as the plaques march across white and gray matter, taking out the memory and cognitive ability, and wreaking havoc on the patient and their family. No treatment can halt this invasion once it occurs. But now, a small trial for an experimental drug is lending patients and loved ones hope.

University College London neuroscientist John Hardy, who played a role in amyloid plaque’s implication in Alzheimer’s, warned in an interview with The Guardian, that it is too soon to start breaking out the champagne. The results are from this phase I clinical trial including a mere 32 participants.

Even so, team leader for the Merck project, Matthew Kennedy, told Scientific American that this was the first effective BACE1 inhibitor that also maintained a good safety profile. Two follow-up trials, currently ongoing, including together 3,500 participants, should give us more insight into its efficacy and safety profile, long-term. Each will last 18 months or longer. One includes 1,500 prodromal patients, where the disease is in its seminal stages, and the other with 2,000 patients who each have mild-to-moderate disease. The first trial ends in 2019, while the second will show results next year. 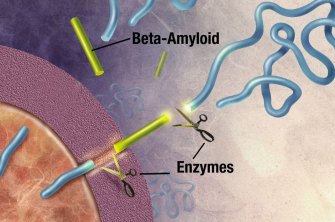 If effective, Verubecestat will be the first breakthrough treatment for Alzheimer’s in a decade. For the phase I trial, each participant took the medication in pill form, once a day for a week. A control group who did not have Alzheimer’s, took the drug daily for two weeks. No side effects were reported.

Enzymes in the body produce proteins. This drug is designed to inhibit the enzyme BACE1. By doing so, the production of amyloid proteins is halted. BACE1 is thought to slice amyloid precursor proteins (APP) to bits, which go on and form globules that gunk up the gray and white matter. These two trials should also help solve a longstanding debate among the Alzheimer’s research community. There is a split over whether amyloid beta protein or tau tangles are the primary driver of the disease. Most believe amyloid protein is.

These findings arrived at an auspicious time. President Barack Obama recently dubbed November national Alzheimer’s awareness month. The administration has set the lofty goal of preventing or curing Alzheimer’s by 2025. Several treatments in the works may reap results. This BACE1 inhibitor is among the most promising.

On another front, in a study published in the journal Nature, antibody therapies were shown to break up existing amyloid plaque buildup. In that study, the drug Aducanumab was used. Researchers speculate that this could be combined with a BACE1 inhibitor like Verubecestat in order to recoup areas of the brain already affected, while at the same time, blocking the production of amyloid protein. Though dead neurons cannot be revived, living ones can be salvaged.

Tags
alzheimer'sAlzheimer's curealzheimer's diseaseAmyloid beta plaquesantibody therapydrug trialJohn HardyMatthew KennedymemoryMerckMerck Research Laboratoriesneurodegenerative diseasetreatmentUniversity College LondonVerubecestat
In this article
alzheimer'sAlzheimer's curealzheimer's diseaseAmyloid beta plaquesantibody therapydrug trialJohn HardyMatthew KennedymemoryMerckMerck Research Laboratoriesneurodegenerative diseasetreatmentUniversity College LondonVerubecestat
Related
9 tactics to build a stronger memory and mind
Stress shrinks your brain. Neuroscientist Lisa Genova explains how to strengthen it.
▸
10 min
—
with
Lisa Genova
Neuropsych
The life-long psychological effects your first love has on you
If love is an addiction, your first love is the first dose.
Neuropsych
Making memories actually involves breaking our DNA, study shows
Brain cells snap strands of DNA in many more places and cell types than researchers previously thought.
Neuropsych
Sleep deprivation affects fertility, memory, and even your immune response after a vaccine
Are you getting a full 8 hours?
Neuropsych
Why does life flash before your eyes in a life-threatening scenario?
The experience of life flashing before one’s eyes has been reported for well over a century, but where’s the science behind it?
Up Next
Culture & Religion
Shiny New Skin, Same Old Snake – Think Again Podcast #71 – Jelani Cobb
Spontaneous, deep talk on surprise topics. Historian and New Yorker writer Jelani Cobb on interspecies ethics, the limits of civil discourse, and mathematical symmetry as the defining principle of the universe.