A five-minute scan could soon be used to predict the onset of dementia 10 years before the condition emerges, according to researchers at the University College London (UCL).

In a study that began in 2002, scientists used ultrasound scanners to observe blood vessels in the necks of 3,191 middle-aged men and women. The purpose was to identify blood vessels that had stiffened, which can occur as a result of aging and high blood pressure. Stiff blood vessels can pose dangers to cognition.

As the heart beats, it sends a physical pulse through all parts of the body, including toward the brain. Blood vessels in the neck that are healthy and elastic can help to diminish these physical pulses. But if these vessels become stiff over time, they can lose their protective properties and the effectively stronger pulses can begin to damage the more delicate blood vessels in the brain. This can contribute to cognitive decline.

After conducting routine scans of participants over 15 years, the researchers found that participants who showed the strongest pulses (the top 25% of patients) were about 50% more likely to experience accelerated cognitive decline later in life.

“These findings demonstrate the first direct link between the intensity of the pulse transmitted towards the brain with every heartbeat and future impairments in cognitive function,” said Scott Chiesa, a post-doctoral researcher at UCL, who recently presented the findings with colleagues at the American Heart Association Scientific Sessions conference in Chicago. 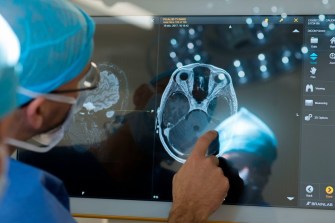 The future of dementia detection

Still, the study has yet to identify exactly which patients went on to develop dementia. The researchers plan to continue using MRI scans to study patients in the long-term study in order to learn more about how blood flow interacts with the development of dementia. If larger studies back up the initial findings, the scans could become a widely used tool to predict dementia in people years before the condition strikes.

That’d be an important development, considering that dementia can be caused by the lifestyle choices we make in early adulthood and middle age, and a reliable predictor of dementia could encourage people to make choices that scientists already know help to prevent the condition: stop smoking, exercise regularly and eat healthily.

“Dementia is the end result of decades of damage, so by the time people get dementia it’s too late to do anything,” Chiesa said. “What we’re trying to say is you need to get in as early as possible, identify a way to see who’s actually progressing towards possibly getting dementia and target them.”

The Alzheimer’s Association reports that about 5.7 million Americans currently live with Alzheimer’s, the most common form of dementia, at a national cost of about $277 billion.

Here’s what it means for the field.
Up Next
Hard Science

Drill, baby, Drill: What will we look for when we mine on Mars?