You know someone has received their 23andMe report when they write one of two social media posts: they boast of having Neanderthal DNA or being an ancestor of Genghis Khan. Sure, it’s a bit strange to take pride in a lineage filled with pillaging and murder, yet that’s often how we view history from afar, downplaying shadowy events while championing warrior ancestry.

Let’s move on to Neanderthals. The common understanding of evolutionary biology goes something like this: chimps to humans with a period of Neanderthal intermediaries along the way—the “starting to lose hair” phase. Of course, the picture is more complex.

What happened to all of these intriguing relatives? Most likely, Homo sapiens killed them. Our forebears procreated with whatever combinations worked, most famously Neanderthals, as recently as 40,000 years ago. Today an estimated 40 percent of Neanderthal genome lives on in 2 percent of modern, non-African humans (although the idea that Neanderthals and Africans didn’t mingle is now being challenged). The Neanderthal genome is the topic of an exciting new study, published in the journal Cell Stem Reports.

In 2010, Swedish geneticist Svante Pääbo first mapped the Neanderthal genome. He successfully extracted and sequenced Neanderthal DNA, opening up an entirely new field of genetic research. Evolving on that work, a team lead by Grayson Camp at the Institute of Molecular and Clinical Opthalmology in Basel, Switzerland has grown Neanderthal DNA-containing brain tissue for the first time.

The team used induced pluripotent stem cells (iPSC), which are normally derived from human skin or blood cells. Stem cells are biological gold. By reprogramming these cells back to an embryonic-like state, researchers can develop a wide range of human cells for therapeutic purposes. This is exactly what Camp hopes this research on the Neanderthal genome will help accomplish.

Genetic codes reveal secrets around biological development and susceptibility to disease. Since stem cells can resemble brain, stomach, skin, kidney, and intestinal (among others) human tissues, their range of utility is endless. Researchers are hopeful that stem cells will help combat the ravages of diabetes, leukemia, and neurological disorders, among numerous other diseases. 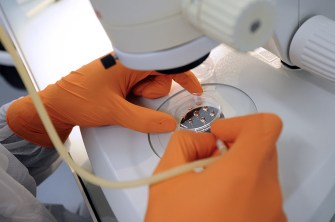 While his team’s work is exciting, Camp warns that this is no science fiction experiment.

“These are human cells, they’re not Neanderthal cells but human cells that have Neanderthal DNA naturally inside them. This is totally different to Jurassic Park. It’s more about studying the mechanism than try to recreate something.”

While these culture systems are not yet optimal, the process has begun. Camp is interested in studying other Homo ancestors, such as Denisovan DNA. The further we dial back the clock, the better we understand our origins. If that path leads to treatments or cures for some of humanity’s most prolific killers, the backpedaling will be worth it.

Virtually all the statistical methods researchers commonly use assume potential mating partners decide who they will have children with based on a roll of the dice.
Thinking

The genes responsible for facial features may also influence behavior.
Up Next
Starts With A Bang

The view from beyond Pluto is far enough from Earth that we can see the stars shift.NASA’s New Horizons, humanity’s first spacecraft to encounter Pluto, is more than 4.3 billion miles […]