Overcoming years of stigma and governmental restrictions, British scientists showed that the use of psychedelics can create a new field of psychiatric treatments.

In a first study of its kind, researchers found psilocybin, the psychedelic compound in magic mushrooms, to be a safe and effective method to treat serious depression.  Scientists from Imperial College London concluded that giving managed doses of psilocybin to subjects who were previously resistant to treatment by common anti-depressants led to “enduring reductions in symptom severity”.

The study was conducted by the team which earlier this year published the groundbreaking research where they scanned the brains of people using LSD.

The senior author of the study, Professor David Nutt, said: “It is important that academic research groups try to develop possible new treatments for depression as the pharmaceutical industry is pulling out of this field‎. Our study has shown psilocybin is safe and fast acting so may, if administered carefully, have value for these patients.”

The study involved 12 patients (six men and six women) with moderate to severe depression that was not improved by previous attempts at treatment and lasted on average 17.8 years. There was no control group. Researchers gave the subjects two oral doses of psilocybin (10mg and 25 mg) 7 days apart. The subjects were provided with psychological support and a safe setting. The patients were then assessed for depressive episodes from 1 week to 3 months after treatment.

Here is how the flow of the study:

Researchers found that the “trip” for each participant started about 30-60 minutes in, peaked at 2-3 hours after the dosing, and subsides after about 6 hours. Psilocybin was tolerated well by all the subjects, without major side effects, with some exhibiting only mild anxiety and confusion.

The study’s lead author, neuropsychopharmacologist Dr. Robin Carhart-Harris, cautioned: “Psychedelic drugs have potent psychological effects and are only given in our research when appropriate safeguards are in place, such as careful screening and professional therapeutic support. I wouldn’t want members of the public thinking they can treat their own depressions by picking their own magic mushrooms. That kind of approach could be risky.”

In other words, don’t try this at home just yet, although the results are very promising.

This chart highlights the efficacy of the treatment: 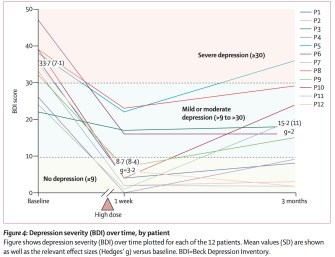 The researchers acknowledge that their study was conducted on a small scale and see it as a feasibility study that should motivate further research into the use of psychedelic compounds to treat major depression. They hope their work will “catalyse the re-emergence of a promising research area in psychiatry”.

The study is available here.

Tags
depressionmagic mushroomspsilocybinResearchstudy
In this article
depressionmagic mushroomspsilocybinResearchstudy
Related
Mind & Brain
Mindfulness: New age craze or science-backed solution?
Research has shown the benefits of mindfulness, but the current mindfulness craze cannot deliver on its overhyped promises.
Health
COVID and “gain of function” research: should we create monsters to prevent them?
Gain-of-function mutation research may help predict the next pandemic — or, critics argue, cause one.
Neuropsych
Psilocybin and depression: “magic mushroom” drug could regrow lost brain connections
Psychedelics have been shown to help reduce depression. This study may show us why.
Neuropsych
Flawed data led to our belief in a link between technology use and mental health problems
The evidence for a link between time spent using technology and mental health is fatally flawed.
Neuropsych
“Laughing gas” may offer quick, long-lasting relief from depression
Laughing gas may be far more effective for some than antidepressants.
Up Next
Culture & Religion
Autistic Kids Can Thrive in Integrated Classrooms
The solution might not be easy, but researchers have identified strategies that help all children thrive in the classroom.