Our body size has social implications, mostly self-imposed, which we generally focus on. But the truth is, there are all kinds of sizes within a spectrum that could be considered healthy. It’s the extreme wings of the spectrum, either remarkably skinny or obese, that are particularly dangerous for our health. Admittedly, there’s a growing worldwide obesity epidemic, meaning most people in developed countries end up on one particular side of the spectrum. Of course, many people could benefit from at least some form of weight loss. What can be a stumbling block, however, is how we perceive our own weight.

You’re probably already familiar with anorexia and bulimia, which are life-threatening conditions. What fewer of us may be familiar with is serial dependence bias, which often gives us the impression that we’re thinner than we actually are. This is a psychological illusion recently stumbled upon by researchers at The University of Western Australia, along with colleagues at the Pisa Vision group, in Italy. The results was published recently in the journal Scientific Reports.

Researchers discovered how we gain impressions and perceptions about our own body weight. The mind blends observations made by peers and our own perception of our body to form how we think about our own weight. But that impression can be distorted, allowing us to think that we’re thinner than we actually are.

The study recruited 103 female volunteers to participate. They were each shown pictures of women’s bodies ranging from slim to obese and everything between. Using a marker, participants were asked assess each woman’s weight by making a line on a scale known as the body-line.

Participants commented on each image “by positioning a marker on a line, delineated with images of extreme sizes.” What the scientists noticed was, evaluations of the current woman’s body relied on previous assessments. As a result, researchers say, we humans are actually poor at perceiving our own body size, which is where the serial dependence bias comes in. “Past visual experiences weigh in on body size estimation,” researchers wrote. 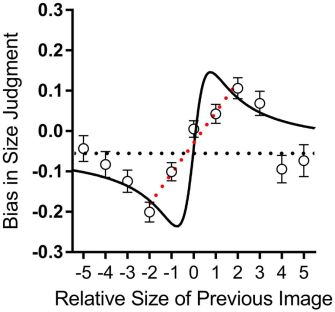 Dr. Jason Bell led the Australian team. “The data show body size judgments are biased towards prior experience,” he said. “As a person’s weight increases above the average, so too does the likelihood that their prior experience involves smaller bodies. Because the brain combines our past and present experiences, it creates an illusion whereby we appear thinner than we actually are.”

Researchers say that when we’re exposed to neutral body types, we may think that they are larger than they actually are, while if we were exposed to larger body types, we may see them as normal or neutral. Previous research has shown that healthy women often underestimate the weight of other females who are overweight, while they overestimate the weight of slim women. Our perception may not be accurate out of the gate. Yet, some researchers argue that it’s the system’s ability to update itself constantly that, over time, makes it more accurate.

The results of this study may lead to new approaches in weight loss, something that’s sorely needed. It could also help us zero-in on what is and is not a healthy body size. The media, for instance, often sells a version of the female frame which is way too thin and so makes for an unrealistic goal. Understanding the difference between our perceptions and reality, from a health perspective, may help us better project a healthier image and make it easier to reach and maintain our ideal weight. These results may also help us better understand those who are obese or have an eating disorder.

Want to test how visually perceptive you are (or aren’t)? Watch this:

Nutrisystem review: The key to losing weight—and keeping it off

Nutrisystem is a smarter weight-loss program that users enjoy.
Health

Your body image can be influenced by smells and sounds

Research finds that our sense of self can be manipulated by certain smells and sounds.
Health

Man whose gut brewed beer is cured—by a poop transplant​

Is focusing solely on body mass index the best way for doctor to frame obesity?
Health

The study was only conducted with already healthy men, however.
Up Next
Strange Maps

Street names can cause diplomatic offence – and sometimes, that’s exactly why they’re there.