Chicken is America’s favorite meat. But, chances are, you aren’t preparing it safely.

An alarming new study found that only 1 out of every 75 households are cooking chicken properly by using a thermometer. This is according to research from the Norwegian Institute of Food, Fisheries and Aquaculture Research. Nearly 4,000 households in five European countries were asked about common methods for checking the doneness of chicken, and the findings were unsettling.

While this is a common technique used by half of the households in the survey, the researchers reported that the color of the inside of a chicken changes at temperatures that are too low to kill common poultry pathogens like salmonella,clostridium perfringens, and the most common, Campylobacter. According to the United States Department of Agriculture, poultry that is sufficiently cooked and safe to eat can come in shades of white, pink, and tan just like insufficiently cooked poultry.

Thermometers are perhaps the most reliable ways of indicating if a chicken is safe to eat, but less than 1.3 percent of households in the study used them while cooking chicken.

In addition to being the most popular meat in the United States, chicken is also the number one cause of foodborne illnesses. According to a CDC study, 3,113 people reported being sickened by chicken via the National Outbreak Reporting System web app between 2009 and 2015, more than by any other food category.

Eating undercooked chicken can cause foodborne illness with symptoms like fever, diarrhea, digestive malfunction, abdominal cramps, vomiting, and dehydration. This affects more than 1 million people in the United States every year, according to the CDC. Salmonella symptoms typically begin 6 hours to 6 days after infection, and can last from 4 to 7 days. Symptoms associated with a Campylobacter infection start 2 to 5 days after the infection and can last up to a week. As for C.perfringens, the symptoms come on suddenly, typically occurring between 8 to 12 hours after infection, and last for less than 24 hours. Unlike salmonella and Campylobacter, vomiting and a high fever are not symptoms associated with C.perfringens. 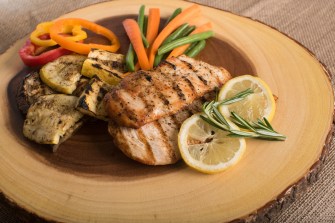 Photo by Mark DeYoung on Unsplash

How to safely prepare chicken

So, how should poultry lovers go forth?

Caroline West Passerrello, MS, RDN, LDN, a spokesperson for the Academy of Nutrition and Dietetics, told Healthline that safety is not subjective.

“To be sure chicken is safe to eat, use an objective measure instead of a subjective observation,” she explained. In other words, use a food thermometer.

165°F (74°C) is the standard internal temperature that chicken needs to reach before it is considered safe to eat. Passerrello said to aim for the thickest part of the meat, making sure that the tip of the thermometer isn’t touching any of the bird’s bones or fat. You should also check the temperature in more than one place to confirm that it is evenly cooked and safe to consume.

While a meat thermometer will certainly help, you should also pay special attention to thoroughly heat the entire surface of the chicken, where most of the bacteria lingers. The researchers in the study reported that bacteria continued to remain on the surface chicken in places that had not been in contact with a frying pan even after it was fully internally cooked.

“We were surprised to find that these recommendations are not safe, not based on scientific evidence and rarely used by consumers,” Dr. Solveig Langsrud, the lead author of the study and senior scientist at the Norwegian Institute of Food, Fisheries and Aquaculture Research, said in a press release. “Primarily, consumers should check that all surfaces of the meat are cooked, as most bacteria are present on the surface. Secondly, they should check the core. When the core meat is fibrous and not glossy, it has reached a safe temperature.”

But you can, and should, take safety precautions as soon as the poultry is purchased.

Passerrello explained to Healthline that shoppers should “place raw chicken in a disposable bag before putting it in the bottom of your grocery cart to avoid cross-contamination of other items you’re purchasing.”

As for storage, you should place your package of chicken at the very bottom of your refrigerator so as to avoid any juices dripping onto other food. When the time comes to cook your chicken, the best practice is to use gloves when placing the raw slab of meat on a cutting board reserved for poultry only. This is to prevent the chicken juices from potentially cross-contaminating other food that could go on the board. While you should definitely wash your hands, you should not wash the chicken. This could facilitate the spread of pathogens in water droplets around the sink area and beyond.

For more tips on how to safely prepare chicken, check out the CDC’s online guide. Bon appétit.

Psychologist Daniel Goleman shares what he learned by studying the brain waves of Olympic-level meditators, and his findings are unprecedented.
▸
4 min
—
with
Daniel Goleman
Up Next
Hard Science

Tom Cruise is going to space to film an action movie

The 57-year-old is teaming up with NASA and SpaceX for the film project, which is to be set aboard the International Space Station.