From staging 100-mph car-chase scenes as Jack Reacher, to breaking an ankle jumping across rooftops as Ethan Hunt, Tom Cruise is famous for doing his own stunts. Now, the 57-year-old actor is gearing up to perform what may be the biggest stunt in movie history: traveling to the International Space Station to shoot a feature film.

According to a Deadline report, Cruise is teaming up with SpaceX and NASA on the project, which is reportedly an action-adventure movie. It would be the first narrative film ever shot in space.

NASA is excited to work with @TomCruise on a film aboard the @Space_Station! We need popular media to inspire a new generation of engineers and scientists to make @NASA’s ambitious plans a reality.pic.twitter.com/CaPwfXtfUv

It’s currently unclear how Cruise will travel to the ISS. The U.S. stopped sending astronauts to the station after it closed its shuttle program in 2011. Since then, the U.S. has paid Russia to transport astronauts to the space station.

But SpaceX and NASA hope to soon usher in a “new era of human spaceflight” with the SpaceX Demo-2 mission, scheduled for May 27. The mission involves sending a pair of American astronauts to the ISS aboard a SpaceX vehicle called Crew Dragon, launched by the company’s Falcon 9 rocket.

It would be the first time SpaceX — or any private space company, for that matter — has sent astronauts to the ISS. (In 2012, SpaceX became the first company to send a cargo mission to the station.) 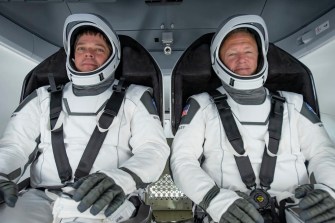 NASA’s SpaceX Demo-2 mission will return U.S human spaceflight to the International Space Station from U.S. soil with astronauts Robert Behnken and Douglas Hurley on an American rocket and spacecraft for the first time since 2011

“After successfully docking, [astronauts] Behnken and Hurley will be welcomed aboard [the] station and will become members of the Expedition 63 crew,” NASA wrote on its website. “They will perform tests on Crew Dragon in addition to conducting research and other tasks with the space station crew.

Upon conclusion of the mission, Crew Dragon will autonomously undock with the two astronauts on board, depart the space station and re-enter the Earth’s atmosphere. Upon splashdown just off Florida’s Atlantic Coast, the crew will be picked up at sea by SpaceX’s Go Navigator recovery vessel and return to Cape Canaveral.” 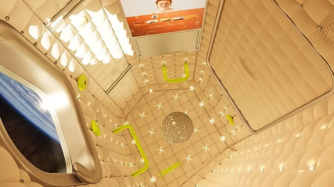 In January, NASA and a startup called Axiom Space announced plans to attach what’s essentially a “space hotel” to the ISS, and to sell trips to non-astronauts. It would be a major step in the agency’s years-long push to privatize the aging station.

Axiom has already lined up its first customer. The ticket cost? An estimated $55 million, the bulk of which comes from the steep cost of the rocket launch. But it’s not much cheaper once you get to the station — a 2019 NASA report shows that the cost of life-support equipment alone is about $11,250 per day.

So, though much remains unclear about Cruise’s upcoming film project, what’s certain is that shooting it will require an astronomically huge budget.

Michio Kaku believes math is the mind of God.
▸
6 min
—
with
Michio Kaku
Up Next
Health

A breakthrough in chronic pain relief

Researchers at the University of Copenhagen might have discovered a cure.