Shortly after the genetic testing service, 23andMe, launched, I signed up. A recent podcast ad mentioned one condition the company tests for that I had missed: misophonia. Having suffered from this psychological phenomenon my entire life, I didn’t realize 23andme had pinpointed a predisposition.

Turns out I’m at average risk for misophonia, reminding me once again that while genes are destiny, as Siddhartha Mukherjee noted, they are not the only factor in your future (as Mukherjee also noticed). Yet this raises an interesting question: If I knew I was genetically predisposed for misophonia, would this increase the likelihood I’d suffer from it?

Mind over matter is a longtime expression suggesting that the power of thought can override physical processes. This sentiment is misguided. “Mind and matter” or “mind with matter” might be more appropriate considering that “mind” relies on a body to set it in motion. The “over” part places too much emphasis on mental activity. We’re not trying to bend spoons, but align our mental and physical worlds.

We already know mind influences matter: mindset is the catalyst for action, which sets into motion subsequent reaction. Viewing it as a battle is not the healthiest affective attitude to cultivate. A new study at Stanford, published in Nature Human Behavior, has discovered that mind indeed has a profound effect on how our body’s chemistry operates:

In a study examining what may be a novel form of the placebo response, psychologists have found that just telling a person they have a high or low genetic risk for certain physical traits can influence how their body functions when exercising or eating, regardless of what genetic variant they actually have. 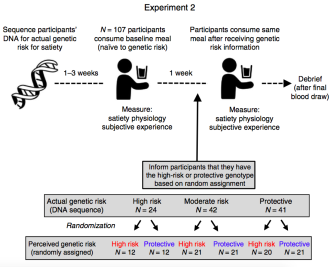 Assistant professor of psychology, Alia Crum, and her team found that physiological responses changed when participants were informed they had an increased genetic risk for obesity or low exercise capacity. This information changed their mindset, thus affecting their chemistry.

Two groups were measured: 116 participants in the exercise study, 107 in the eating segment. A week after their initial test (treadmill endurance for the exercise set, eating a small meal for the other), they performed the same tests, only this time genetic information was disclosed—sometimes falsely.

Those who were told they had a version of the gene that made them less prone to obesity, FTO, actually performed better after the second meal. They produced two-and-a-half times more of the fullness hormone, even though the meal was identical to the one they’d eaten the week before. Whether or not they are actually genetically predisposed didn’t matter. What did was whether or not they thought they were.

The same occurred in the exercise group and their levels of CREB1.

People told they had a gene that made them respond poorly to exercise then went on to do much worse on a challenging treadmill test. Their lung capacity was reduced, they were less efficient at removing carbon dioxide, and they quit the treadmill test sooner. 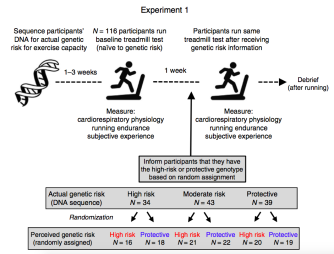 Participants informed they were predisposed to a lower exercise threshold performed worse on the treadmill test even if they were not actually predisposed, while those who believed they have the protective obesity gene performed better on the eating tests even if they did not have that gene.

Crum believes this fact has to be taken into consideration when delivering genetic information by companies such as 23andMe. She continues,

The take-home message here is that the mindset that you put people in when you deliver genetic risk information is not irrelevant. The mindset of being genetically at risk or protected can alter how we feel, what we do and – as this study shows – how our bodies respond.

When I recently logged back into 23andMe, I noticed layers of security—emotional protection, really—required before I was allowed to receive new information. I was asked a few times whether or not I really wanted to know if I was predisposed to a varying range of problems. Inquisitive creature I am, I always click “yes.”

Yet as Crum’s study shows, that might not be the best decision. Information is powerful. What we think matters. Not knowing has its own power, as does believing false information. This might not be what we want in our politics, but in our bodies it might prove a powerful antidote to the destiny genetics had initially planned.

Mind and matter are part of the same package. Treating them any other way leads to confusion and frustration. Approach a situation with the proper mindset—even a false one, it turns out—and the tension between the two immediately fades.

You only have 4,000 weeks of life. Use them wisely.
Up Next
Starts With A Bang

Why Haven’t Scientists Found ‘Earth 2.0’ Yet?

With thousands of discovered planets around stars beyond our own Sun, why haven’t we found the next Earth?Over the past 30 years, astronomers have gone from zero known extra-solar planets to […]