What is the meaning of life? This question has caused thinkers to wax poetic for eons. Viktor Frankl believed that suffering provided meaning; Joseph Campbell thought each of us brings our own meaning, and that the question itself is meaningless; for Woody Allen it required finding “an antidote for the emptiness of existence.” For Douglas Adams, it was quite simple: the final answer is 42 (and he likely didn’t mean Jackie Robinson).

While we can debate the meaning forever, what is critically important, according to a new study published in JAMA Current Open, is that we have a meaning of life.

Between the years of 2006-2010, data from 6,985 individuals above age 51 (mean age: 68.6) were studied. The information was compiled from the Health and Retirement Study, a public resource that has been gathering data on aging since 1990.

The researchers discovered that people with a sense of purpose were much less likely to die from all-cause mortality. More interestingly, those without meaning were more likely to die of cardiovascular disease.

Celeste Leigh Pearce, an associate professor in the Department of Epidemiology at the University of Michigan School of Public Health, claims that after this research she moved from skepticism to curiosity, amazed that mindset could have such a profound biological impact.

“I approached this with a very skeptical eye. I just find it so convincing that I’m developing a whole research program around it.”

Previous studies have correlated a strong sense of purpose in life with reduced sleep disturbances, fewer strokes (and better recovery from strokes), less depression, and stronger tolerance of diabetes. Prior research has also looked into the relationship between mortality and meaning, producing similar data. Philosophy and physiology conspire.

For this research, the modified Ryff and Keyes Scale of Psychological Well-being was used. The six domains this questionnaire focuses on are autonomy, environmental mastery, personal growth, positive relations with others, purpose in life, and self-acceptance.

The full assessment includes 42 questions; in this instance, seven life purpose questions were asked, with a score ranging from one to six on each question. One of the statements being assessed, for context: “Some people wander aimlessly through life, but I am not one of them.” Answers ranged from “strongly agree” to “strongly disagree.”

Overall, three factors (other than purpose) were shown to increase the likelihood of an earlier death: being older, male, and unmarried. Health, education, economic, gender, and ethnic factors were weighed. Regardless of those factors, respondents with a sense of purpose were less likely to die from all-cause mortality, as well as from drinking or smoking; they also exercised more.

This comes at a time when new research suggests that exercise might be a better prescription than pharmaceuticals in treating mental issues such as anxiety, depression, and suicidal rumination. A sense of purpose causes you to take better care of your body, creating a positive feedback loop: you feel motivated so you exercise; exercise makes you stronger and healthier. Whoever separated body and mind in the first place got it all wrong. Mindset matters, indeed. 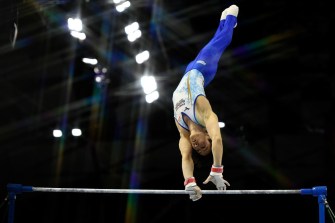 Fuya Maeno of Japan competes on the Horizontal Bar during day two of the Artistic Gymnastics NHK Trophy at Musashino Forest Sport Plaza on May 19, 2019 in Chofu, Tokyo, Japan.

The team also notes that a stronger sense of well-being is associated with a decreased expression of proinflammatory genes and a strong sense of purpose is linked with lower cortisol and lower levels of proinflammatory cytokines. The less inflammation in the body the better, as elevated levels lead to a variety of cardiovascular and immune-related issues. When your nervous system is constantly in sympathetic mode it’s hard to remain composed. We pay the price with reduced time.

We derive meaning from all facets of life; not only religion provides it (though the most religious claim a monopoly). In fact, researchers behind this study cite volunteering and raising children as activities that produce meaning, while noting that well-being therapy and meditation have been shown to increase quality and purpose of life.

As professor Alan Rozanski, at the Icahn School of Medicine at Mount Sinai (who was not involved in this research but has produced his own), says, “The need for meaning and purpose is number one. It’s the deepest driver of well-being there is.”

Buddhism has rules for slaying your enemies. But the real surprise is finding out who your enemies actually are.
Up Next
Hard Science

Intense lightning could have burned us out of the trees.