Two annual occasions cause the quickest weight gain in the shortest period of time, write the authors of a new study: vacations and the holidays (in this case, the stretch between Thanksgiving and New Year’s Day). During that last stretch of time, when parties dominate and early morning workouts take a backseat, the most weight is gained.

In an attempt to find an intervention, a team led by the University of Georgia’s Sepideh Kaviani, tried a novel approach: Have volunteers weight themselves daily (daily self-weighing, or DSW). They wanted to know if visual graphical feedback (GF) would make a difference in the amount of weight they put on and retain.

One hundred and eleven volunteers showed up for three sessions, one before Thanksgiving, one after New Year’s Day, and a final visit 14 weeks into 2018. One group was instructed to partake in DSW using GF as a guide; the other group was given no instructions at all.

The team points to previous research that confirms that DSW produces clinically significant weight loss in general as well as during the first year of college. It is believed that a graphical representation of weight fluctuations encourages people to take in less energy (calories) while expending more (exercise) in an attempt to lose or maintain weight. Indeed, that is what Kaviani and team report.

Second author of the paper, University of Georgia associate professor Michelle vanDellen, comments that the GF is invaluable to those concerned with tracking improvement:

“People are really sensitive to discrepancies or differences between their current selves and their standard or goal. When they see that discrepancy, it tends to lead to behavioral change. Daily self-weighing ends up doing that for people in a really clear way.”

As for why volunteers engaging in DSW were able to maintain or lose weight, Jamie Cooper, also an associate professor at the university and another author of this paper, breaks it down.

“Maybe they exercise a little bit more the next day (after seeing a weight increase) or they watch what they are eating more carefully. The subjects self-select how they are going to modify their behavior, which can be effective because we know that interventions are not one-size-fits-all.” 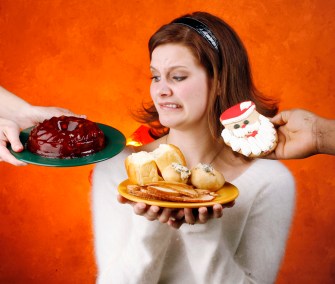 The researchers note that stress associated with the holiday season plays a role in weight gain, an interesting observation as obsession with weight can also be unhealthy. For example, the eating disorder orthorexia evolves when someone becomes obsessed with a healthy diet, eliminating food after food in the pursuit of the “cleanest” diet and “least toxic” foods possible—an impossible goal that eventually reduces their number of calories to almost nothing.

Humans are complex animals, however. We love gamifying activities – hello, step counters and heart rate monitors. In this instance, perhaps the graphical feedback outweighs the obsession, creating a healthy feedback loop between scale and mind.

Whatever the exact mechanism, every intervention curbing obesity should be considered. With over one billion humans suffering from being overweight on the planet, gamify away.

Virtually all the statistical methods researchers commonly use assume potential mating partners decide who they will have children with based on a roll of the dice.

Terrified of blushing? You might have erythrophobia.
Up Next
Neuropsych

A study at Rutgers University details the importance of this parent-child bond.