Is associating with a certain gender more of a flexible sense than hardwired biological fact? A new study shows that people who were put under the illusion of having an opposite-sex body developed a more equal understanding, with fewer stereotypes, of both male and female aspects.

In their paper, the scientists defined gender identity as “a collection of thoughts and feelings about one’s own gender, which may or may not correspond to the sex assigned at birth.” To probe this, they designed three experiments using virtual reality that allowed people to experience what it’s like to have a body they weren’t born with.

The experiments, led by Pawel Tacikowski of Karolinska Institutet in Sweden, involved a relatively large sample of 140 people. One of the experiments had participants wearing a head-mounted display that was playing a first-person POV video of either a male or female body. The participants had to watch the stranger’s body being touched while the same kind of action, on the same part, was being performed to their body. The synchronized nature of the touching created the illusion of another person’s body being their own.

One of the changed conditions had the stranger’s body appear to be threatened with a knife. Other control conditions had the touches being asynchronous, disrupting the illusion. In all the cases, the subjects had to tell the scientists how masculine or feminine they perceived themselves. The experiments showed that the participants felt more connected to another person’s body when the conditions were synchronized. Both females and males reported feeling less identification with their own gender during such experiences. 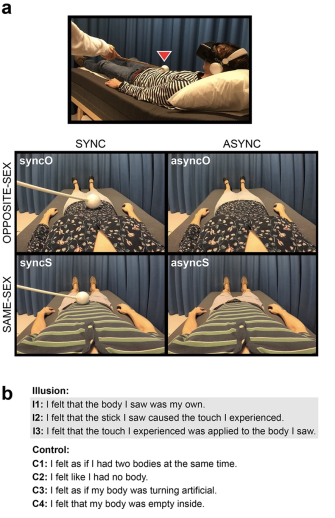 In experiment (a), subjects wore a head-mounted display in which a body of an unknown male or female was shown from a first-person perspective (with the participant’s actual body out of view). In part (b), participants had to rate the illusion after every interaction to assess the degree of feeling that the stranger’s body was their own.

“We found that even a brief transformation of one’s own perceived bodily sex dynamically updated the subjective, implicit, and personality-related aspects of the sense of own gender and made these aspects more balanced across male and female categories,” write the scientists, adding “The fluidity of gender identity that we report here extends previous knowledge by demonstrating that the link between own body perception and the sense of own gender is dynamic, robust, and direct.”

Another experiment utilized the Implicit Association Test (IAT) to find that the implicit gender biases of the subjects became more balanced during the illusion of having the body of the opposite sex. The third test demonstrated that the illusion also affected explicit gender beliefs, with the participants more equally ranking both masculine and feminine traits.

Current gender theories, as outlined in the study, have moved away from positioning gender identity as a strict “male-female dichotomy.” Instead, the scientists say, the prevailing view is that gender is derived individually from a variety of associations with both genders, as well as from personal genetics, hormones, patterns of behavior and social life. There is also the understanding that the sense of your own gender is determined by your beliefs about males and females overall.

Check out the study “Fluidity of gender identity induced by illusory body-sex change” in the journal Scientific Reports.

What can elite athletes teach you about how to win?
Up Next
Health

There’s no such thing as a miracle drug.