Exercise has long been prescribed as part of a healthy lifestyle — an important directive, considering that 80 percent of Americans are insufficiently active. Previous research has shown that lifting weights helps lift depression, cardiovascular activities reduce the effects of anxiety, and any type of movement improves mental health.

A new study at the University of Vermont Medical Center published in the journal Global Advances in Health and Medicine takes that last claim one step further: Exercise should be prescribed to patients with mental health issues before psychiatric drugs.

This research follows a growing acknowledgment of the chronic problems associated with SSRIs and other pharmacological interventions. The efficacy of antidepressants diminishes over time, leaving patients hooked as they suffer more side effects than benefits. As Jerome Groopman recently reported in The New Yorker, the field of psychiatry has long offered contentious treatments because we do not have a biology for mental illness. Mental health scripts are guesswork, more of an art than science.

For this study, lead author David Tomasi, a psychotherapist and lecturer at the University of Vermont, alongside the center’s Sheri Gates and Emily Reyns, built a gym for the hundred-or-so members of the inpatient psychiatry unit. Tomasi says that most patients in the U.S. are first treated with medications, with exercise-based treatments offered in either a limited capacity or not at all. The center is the first to prescribe exercise as the first form of treatment.

How to manage your mental health | Leon Taylor | TEDxClaphamwww.youtube.com

The results were stunning. After leading the patients in structured exercises — each 60-minute session included a combination of strength training, flexibility training, and cardio — 95 percent of patients reported feeling better, while 63 percent reported feeling happy or very happy instead of sad, very sad, or neutral. A whopping 91.8 percent said they were pleased with their bodies during the sessions. Tomasi continues,

The general attitude of medicine is that you treat the primary problem first, and exercise was never considered to be a life or death treatment option. Now that we know it’s so effective, it can become as fundamental as pharmacological intervention.

Blame, in large part, Cartesian dualism. The mind-body split has destroyed our understanding of our inherent animal nature. The notion that there’s an ethereal process inside the biological workings of our bodies — the ambiguous “soul” — has resulted in a severe disassociation between physical movement and psychology. We’ve come to believe we can treat the brain separately from the body.

Humans were designed to move. Bipedalism offers us serious advantages in lung capacity and communication systems. Humans are generally weak and slow for mammals, but the combination of mental ingenuity and physical dexterity gave us a competitive advantage, one we’ve exploited so effectively that, thanks to our technology, we now bow to the cult of the mind while abandoning the reality of our bodies. Yet we’re paying the price for our conveniences.

As we enter a world dominated by AR and VR, in which e-sports players actually consider themselves athletes, this disconnection deepens. As Robert McFarlane writes in Landmarks, the removal of nature-based words from our dictionaries to make room for terms associated with technology is another nail in the coffin of our relationship with nature. When we have a richer vocabulary for items on a screen than for what we see when we lift our gaze, we lose a sense of what formed the very essence of who we are. 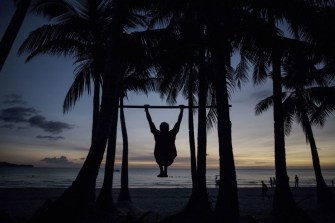 A man does pull-ups exercises at a beach on the Philippine island of Boracay on October 25, 2018.Photo by Noel Celis/AFP/Getty Images

From escaping predators and chasing prey to squatting for foraging and for the dexterous engagement required to build shelter, our physiological plate was full for eons. Now, we’ve constructed a world in which most of the population survives by performing minimal physical activity. To believe this would not have profound consequences on our mental health is to be ignorant of the journey that brought us here.

No one involved in the study is suggesting abandoning psychotropic medications — yet. For the time being, the team suggests integrating gyms into psychiatric facilities to conduct more real-world testing. As Tomasi concludes,

The priority is to provide more natural strategies for the treatment of mood disorders, depression and anxiety. In practice, we hope that every psychiatric facility will include integrative therapies — in our case, exercise in particular — as the primary resource for their patients’ psycho-physical wellbeing.

This isn’t a fusion of mind and body, but a recognition that “mind” needs “body” in order to thrive. A sedentary existence does not ultimately provide meaning. Humans need to own every aspect of our birthright. That a prescription as simple as “move” could alleviate a range of mental health issues is not simplistic, even if it is simple. Of course, its efficacy can only be measured through movement, which is what nature demands of us.

Tags
diseasehuman bodyillnessmedical researchpsychology
In this article
diseasehuman bodyillnessmedical researchpsychology
Related
Thinking
Why you should laugh at yourself, according to Seneca and Nietzsche
“It is more human to laugh at life than to lament it.”
Sponsored
4 misleading personal finance tips
Personal finance advice is often over-simplified and fails to consider economic research or people’s unique circumstances.
Thinking
Bonhoeffer’s “theory of stupidity”: We have more to fear from stupid people than evil ones
Evil is easy to identify and fight against; not so with stupidity.
Health
COVID, RSV and the flu: A case of viral interference?
Viruses, it turns out, can block one another and take turns to dominate.
Health
What decades of research tells us about living the good life
Warm relationships protect your mind and body from the slings and arrows of life.
Up Next
Starts With A Bang
What Was It Like When Human Civilization Reached Its Pinnacle?
The past 300,000 years occurs in the blink of a cosmic eye, but it’s meant everything to humanity.The history of humanity was anything but inevitable. Although the Universe created the […]