Let’s say you’re painting your house. You’re doing this by yourself because, let’s face it, you don’t want to pay for professional painters, and nobody really wants to help you paint your house. You reach out to get that one spot that’s just a little bit out of reach because climbing down to move the ladder is just too much of a hassle, but it turns out you may have overestimated just how far away that spot was because now the ladder’s tipping a bit. You try to swing back, but it’s too late — you’re falling through the air 20 feet down to your concrete driveway. You land on your back, hearing a sickening crack before losing consciousness.

Things could get very bad. Depending on the extent of the damage, you might not be able to walk anymore. However, new research has demonstrated a potential method of treatment that might make this hypothetical accident less grievous: an “EpiPen” for spinal cord injuries.

Researchers from the University of Michigan recently published a paper in the Proceedings of the National Academy of Sciences that describes an incredible device capable of mitigating — and potentially preventing — spinal cord and brain injuries. “In this work,” said researcher Lonnie Shea in a statement, “we demonstrate that instead of overcoming an immune response, we can co-opt the immune response to work for us to promote the therapeutic response.” By injecting nanoparticles that reduce the body’s immune response, these researchers claim that the severity of such an injury can be significantly reduced, potentially preventing paralysis. 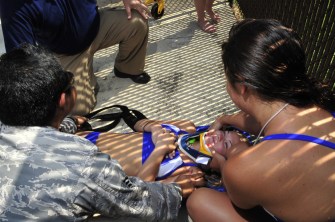 Lifeguards learn what to do in case of a spinal injury at an in-service emergency training class at the Woodland Pool, Shaw Air Force Base, S.C., May 31, 2012. The 20th Medical Operations Squadron instructed this exercise.

How do spinal cord injuries happen?

Most people think of paralysis as occurring when the connection between your brain and spinal cord is severed, that when you break your back, you also sever the spinal cord. This can happen, but often, the culprit is the body’s own inflammatory response to an injury. The brain and spinal cord are normally surrounded by a barrier — commonly known as the blood-brain barrier, but it covers the spinal cord as well — that blocks the central nervous system off from most molecules, including immune cells. The nervous system is an extremely sensitive part of the body, so it can be easily damaged by the immune system’s inflammatory response.

During a traumatic injury to the spinal cord, however, this barrier can be broken, allowing access to the body’s immune cells. These cells aren’t supposed to have access to the nervous system, and the inflammation they produce can kill the sensitive neurons within, damage the myelinated sheaths that allow neurons to send signals to one another, and cause scar tissue that prevents the regeneration of the spinal cord. The result is loss of sensation and reduced function in parts of the body below the injury, sometimes to the extent of paralysis.

How does this new treatment work?

Previously, doctors used a steroid called methylprednisolone to tamp down the immune response, much like how EpiPens are used to avert an allergic reaction. This method had some serious side effects though, causing blood clots, pneumonia, and other effects at a rate that made it too dangerous to rely on.

That’s why Shea and colleagues tested out their new solution of nanoparticles on mice at the University of Michigan. The benefit of using nanoparticles is that there are no pharmaceuticals involved, cutting down on the possibility of side effects.

After injecting the injured mice, the researchers observed as the nanoparticles bound to the inflammatory immune cells and redirected them away from the injury site, where they could cause grievous harm. Not only did this prevent damaging inflammation, this approach also allowed non-inflammatory immune cells that support regeneration to reach the injury site. Without the inflammation and the subsequent formation of scar tissue, these cells could support the regrowth of the damaged nervous system.

While this nanoparticle-based treatment was targeted at spinal injuries, it may have other applications as well. “Hopefully, this technology could lead to new therapeutic strategies not only for patients with spinal cord injury but for those with various inflammatory diseases,” said Jonghyuck Park, who also worked on the project.

Inflammation is an important part of the immune response. It causes blood vessels to dilate, allowing more blood and immune cells to reach the targeted site. These cells release chemical signals that attract more immune cells which work to clear the body of foreign material. But this process often goes awry and can contribute to many other conditions.

“The immune system underlies autoimmune disease, cancer, trauma, regeneration — nearly every major disease,” Shea said. “Tools that can target immune cells and reprogram them to a desired response have numerous opportunities for treating or managing disease.”

So, this new method of treating spinal cord injuries might make any hypothetical ladder accidents much less dangerous. Not only that, but it has the potential to seriously change the way that we treat some of humanity’s deadliest diseases.

Listening to some songs can cause a powerful physiological response known as “frisson.” What is it, and why does it happen?
Up Next
The Present

Did the U.S. weaponize ticks?

Considering the U.S.’s history of biological warfare, maybe this theory isn’t as crazy as it sounds.