There’s something odd about announcing on social media that you’re embarking on a digital detox, which is usually followed by another press release when you’ve returned in which said detoxer bullet points lessons learned while unplugged. This trend shows how embedded screens have become in our interpretation of reality, how much agency we’ve offloaded to a device. It’s arguably better just to drop off and return, if that’s what you choose.

That doesn’t mean time away isn’t valuable. In fact, the opposite appears to be true, anxiety and uncertainty included. That’s the synopsis of a new study conducted by researchers at three universities, which was recently published in the Journal of Travel Research.

The basis itself is promising, considering that most tourists want nothing more than to share their experiences online. Previous research has shown that gazing into the lives of others on Facebook can provoke envy, while an anecdotal collection of Instagram users have admitted that their seemingly cheery posts reflect the opposite of how they were actually feeling. Add to this the fact that the number one reason millennials book vacations is the “Instagrammability” of the location.

For this study—conducted by Brad McKenna at the University of East Anglia, Wenjie Cai at the University of Greenwich, and Lena Waizenegger at Auckland University of Technology—24 volunteers engaged in digital-free vacations. This includes mobile phones, laptops, even navigation tools. Basically, no screens whatsoever. Upping the ante, all three researchers took part themselves.

Digital Addiction: How Half the Developed World Got Hooked on the Internet | Adam Alter

Digital Addiction: How Half the Developed World Got Hooked on the Internet | Adam Alter

Fifteen kept diaries; 18 were interviewed about their experiences. Interestingly, participants predominantly reported having a difficult time in the beginning, with anxiety and frustration leading to actual withdrawal symptoms.

And then…peace. Or something like it. Participants engaged more with other travelers as well as locals; importantly, they spent more time with their travel companions. In general, they took a vacation.

Anxiety was greatly enhanced by the handicap of not having access to GPS. As journalist Maura O’Connor, author of Wayfinding: The Science and Mystery of How Humans Navigate the World, recently told me, the relationship between animals and their environment is primal. Something essential is lost when we’re always looking at a map on a screen; predominantly, the awareness of how we move through space. Being forced to use “old” customs, such as print maps or conversations with strangers, might feel uncomfortable at first but seems to ultimately have enriched the experience.

The reaction times were not the same for all travelers. As McKenna notes,

Yet many, McKenna continues, were more engaged with their actual environments, which is one of the great joys of travel: upending the monotony of daily life. One of my personal favorite activities, as I told O’Connor during our chat, is to immediately walk around foreign cities without using a map. It’s always there if I need it, but really, there’s little reason. We’ve used other landmarks long before satellites were available, and that skill is still available to us. 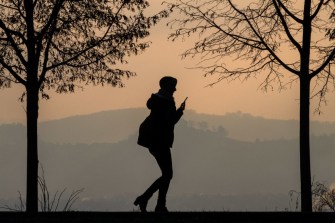 A woman walks between two trees with a smartphone in her hand.

Sadly, the disconnection duration was brief for this study, with “most” being offline for “over 24 hours.” A week or two would make for an even more enlightening study, yet it seems we can’t ask too much from the journeyers in the digital age.

Yet all is not lost: “digital detox” retreats are on the rise. From hiking in Alaska to turtle swimming in Fiji, there’s no end to marketers willing to charge exorbitant rates to take your phone away from you. It’s kind of like low-fat food costing more than its regular-fat counterpart: take something away and consumers gladly for less.

This appears to be part of the study’s plan in the first place, as McKenna says:

If only the study had more noble intentions, such as the mental health implications of digital detoxing. Even Instagram is removing “likes” from public consumption. While the company is advertising the move for mental health, as a friend pointed out to me when I mentioned the CNET article, it’s likely to force advertisers to stop paying influencers and start shuffling that money into Facebook’s coffers. Reading the fine print is rarely the job of consumers, unfortunately.

Still, there’s something essential to be learned from this study. Two years ago I was waiting to enter a taping of “Real Time with Bill Maher.” As there are no phones allowed inside of the studio, we had to wait for an hour before being escorted to our seats. The picture: a few hundred Angelenos sitting in the California sunshine talking to one another.

Such a seemingly simple experience. In fact, the way we’ve socialized for millions of years before a computer was placed in every hand. Strangers chatting with strangers about whatever it was. For a brief period in time, we were all human.

On long-haul flights, some airlines show shipwrecks on their in-flight maps. The aim is to entertain; the result is often to horrify.
The Past

Anxiety can be good or bad. It turns out that it’s really up to you.
Up Next
The Future

Why the Automation Age might still need us around to work

Yes, the robots are coming — but take a breath.