In 1890, psychologist William James applied the term plasticity to human behavior, implying that humans have the ability to change how we act. Until that point, the science community generally believed fate to be genetic: once born our story was pre-told, a convenient philosophy for those with power and resources, who could simply claim, “it was destined by birth.”

Unsurprisingly, James’s revelation didn’t change many minds. The “born this way” mentality remained the driving narrative. Over three decades later, behaviorist Karl Lashley’s research on rhesus monkeys showed that neuronal pathways can indeed change—speculation largely derided by his peers. It would take neuroscientists another four decades, over 70 years after James’s initial comments, to come around to the fact that brains are malleable.

Perhaps more importantly, this research also showed no distinction between the murkier realm of mind and the now-measurable domain of neurochemistry. Researchers finally understood that mind and matter are not separate domains but interdependent and necessary pieces of the human puzzle. Though dualism remains our biological inheritance, we can educate ourselves beyond this primal instinct.

Thanks to research by neuroscientist Paul Bach-y-Rita, neuroplasticity became common currency. While fundamental in the field today, behaviorists and psychologists took decades to come around. As psychiatrist Norman Doidge writes in his breakthrough book on the topic, The Brain That Changes Itself,

“The idea that the brain is like a muscle that grows with exercise is not just a metaphor.”

We can be astonished that science couldn’t recognize a fact as basic as neuroplasticity. Yet ironically, we’re wired to not understand how we’re wired. Minds might change but they’re slow, especially when we’re invested in a competing philosophy. This is playing out in the middle of another controversial suggestion that, in a decade’s time, will seem like common sense: neurogenesis is possible in the stomach as well.

That’s what a new study, published in the journal, Gastroenterology, claims. A team of researchers from Columbia University Irving Medical Center writes that this new domain of medical knowledge might help to correct gut abnormalities, a growing problem around the world, especially in nations that heavily rely on processed foods. Lead author and pediatric gastroenterologist at Columbia, Kara Margolis says,

“Though it’s been known for many years that neurogenesis occurs in certain parts of the brain, the idea that it occurs in the gut nervous system is relatively new.”

The study verifies a claim that has been circulating for some time: depression is gut-related. By focusing on the brain it appears that psychiatrists have been missing an essential jigsaw piece for decades. The neurotransmitter, serotonin, is the target of anti-depression medication; SSRIs (selective serotonin reuptake inhibitors) are the most prescribed class of pharmaceuticals for depression and anxiety. Their efficacy has long been debated, especially for long-term usage, which they were not designed for. That’s likely because 95 percent of the body’s serotonin is produced in the gut, not the brain. Emotions are not a “brain-only” phenomenon, but that’s how the medicine has been distributed.

This is why such an emphasis is being placed on our microbiome. As Emeran Mayer writes in The Mind-Gut Connection, serotonin affects not only intestinal functioning, but also sleep, pain sensitivity, mood, appetite, and well-being. He continues,

“Your gut microbes are in a prime position to influence your emotions, by generating and modulating signals the gut sends back to the brain.”

In the Columbia study, Margolis and team focused on serotonin’s role in constipation in mice. They noticed that shortages in the neurotransmitter lead to a dour mood. By raising serotonin levels in both gut and brain, their depression was alleviated. 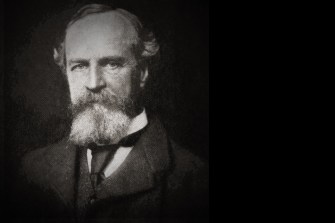 William James, 1842 – 1910. American philosopher and psychologist. From The Story of Philosophy, published 1926. (Photo by: Universal History Archive/UIG via Getty Images)

Up to one-third of humans suffering from depression also have chronic constipation, a condition that leads to 2.5 million physician visits and 100,000 hospitalizations every year. Many antidepressant medications lead to constipation, creating a tragic feedback loop. The medicine makes the condition worse. The reduction of gut serotonin inspires enhanced emotional turmoil.

While this observation is clinically useful, the team also discovered a potential cure: slow-release 5-HTP. This precursor to serotonin is widely available as a supplement, though professionals have long warned about overdosing and side effects; for one, it is a popular recovery tool for MDMA users. Nootropic advocates also include 5-HTP in their “optimization” strategies. Yet dosage matters. Just as multivitamins dump a lot of vitamins into your gut without regard for what you might actually be deficient in, getting serotonin levels wrong has consequences.

Margolis notes that supplements approved for sale are immediate-release, too short-acting to be effective in treating depression. Serotonin produced by this method is quickly inactivated. Dialing in the proper dose for a slow-release formula in the treatment of constipation and depression will take a bit of time. More research, including human trials, will be necessary. But the wait could be worth it.

“The idea that we may be able to use slow-release 5-HTP to treat conditions that require the development of new neurons in the gut may open a whole new avenue of treatment.”

There is an easier way to tackle this problem now: eat the right foods. Sometimes old folk wisdom is the best medication. That said, the fact that the gut-brain connection is becoming popular science represents an important step forward in battling obesity and depression. We’re ready for medicine to take another leap forward.

Tags
biologydepressionemotionsillnessmedicineneuroscience
In this article
biologydepressionemotionsillnessmedicineneuroscience
Related
Thinking
Visual thinking: How to understand the inner lives of animals
Humans are good visual thinkers, too, but we tend to privilege verbal thinking.
Health
New blood types are often discovered following medical disasters
New blood types are regularly discovered by an unusual absence or an unusual presence — both of which can result in tragedy.
The neuroscience of loving music
Humans are musical animals four million years in the making, explained by music expert Michael Spitzer.
▸
8 min
—
with
Michael Spitzer
Neuropsych
How you breathe affects your brain
Your breathing rhythm influences a wide range of behaviors, cognition, and emotion.
Neuropsych
Daily caffeine intake temporarily alters your brain structure
Compared to people who took a placebo, the brains of those who took caffeine pills had a temporarily smaller gray matter volume.
Up Next
Starts With A Bang
Today Marks The Anniversary Of Neil Armstrong’s Near-Fatal Lunar Landing Vehicle Crash
The small step that one man took would never have happened without this narrow escape.On July 20, 1969, history was made as humanity set foot on the Moon for the first […]