Few could match the famous physicist in his ability to communicate difficult-to-understand concepts in a simple and warm fashion.
▸
with
Matt Davis

Theoretical physicist Richard Feynman was unparalleled for his wit, warmth, and insightful understanding of theoretical physics. Being a gifted conversationalist with a powerful passion, Feynman loved to talk about theoretical physics and was good at it, so much so he was known as “the Great Explainer.” Few others were able to approach the difficult and nebulous realm of physics and break it down into simple, entertaining, and informative nuggets of information. In his 1983 series Fun to Imagine, Feynman touches on a variety of topics from a big blue chair in his living room in Altadena, California. Here are 9 brief science lessons from this series.

What we think of as heat is really just motion. Feynman explains that the sensation of heat is the “jiggling” of atoms — the jiggling atoms in hot coffee make it hot, and those atoms bump up against the atoms in the ceramic of your coffee mug, causing them to jiggle as well, making them hotter than they were before.

“It brings up another thing that’s kind of curious,” says Feynman. “If you’re used to balls bouncing, you know they slow up and stop after a while. […] As it bounces, it’s passing its extra energy, its extra motions, to little patches on the floor each time it bounces and loses a little each time, until it settles down, we say, as if all the motion has stopped.” Instead, the downward motion of all the atoms in the ball have just been transferred into the floor, whose atoms are jiggling just a little bit more and has commensurately become just a little bit warmer.

Start the top video at 0:50 to watch this lesson.

Carbon and oxygen have a somewhat paradoxical relationship; once “close” enough to one another, they form a very strong partnership, snapping together. But if they’re too “far away” from one another, they’ll repel each other. Feynman likens it to a hill with a deep hole in the top. “[An oxygen atom is] rolling along, it doesn’t go down in the deep hole because if it starts to climb the hill, it rolls away again. But if you made it go fast enough, it’ll fall into the hole.”

As we learned before, when we talk about heat, we’re really talking about motion, and vice versa. So, if we heat up an atom of oxygen enough, it can roll up this hypothetical hill and fall into the hole. On its way, it might bump into other atoms of oxygen, sending them rolling up their hills, and falling into their holes, which maybe bump other atoms of oxygen at the same time. This cascades, over and over again, until you have what we call a fire. Wood, for instance, contains a lot of carbon. If the oxygen around it heats up enough, the oxygen and the carbon can meet up and make a partnership together into the form of CO2, releasing a lot of energy along the way.

Where did this stored energy come from? Originally, it came from the sunlight striking a tree, which was then cut down and harvested for its wood. “The light and heat that’s coming out,” explains Feynman, “that’s the light and the heat of the Sun that went in. So, it’s sort of stored Sun that’s coming out when you burn a log.”

Start the top video at 7:18 to watch this lesson.

3. Rubber bands are jiggling, too

In addition to fire and the motion of atoms, heat is a big part of why rubber bands are stretchy. Rubber bands are composed of these kinked chains of molecules that, when stretched out, are bombarded by atoms from the environment that encourage those chains to kink up together again. Feynman proposes a little experiment: “If you take a fairly wide rubber band and put it between your lips and pull it out, you’ll certainly notice its hotter. And if you then let it in, you’ll notice its cooler.”

“I’ve always found rubber bands fascinating,” he adds. “The world is a dynamic mess of jiggling things if you look at it right.”

Start the top video at 12:08 to watch this lesson. 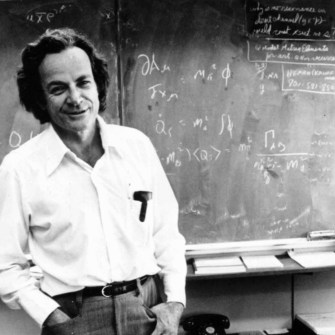 Why do magnets repel? “You’re not at all disturbed by the fact that when you put your hand on the chair, it pushes you back.” With magnets, “we found out by looking at it that that’s the same force as, a matter of fact […] It’s the same electrical repulsions involved in keeping your finger away from the chair.” The difference, Feynman notes, and the thing that makes magnets seem so unusual, is that their repulsive force acts over a distance. This is because the atoms in a magnet are all spinning in the same direction, magnifying the force such that you can feel it at a distance.

Start the top video at 14:53 to watch this lesson.

5. Electricity: The reason you don’t sink through the floor

It’s pretty incredible that a wheel turning from the force of falling water from a dam can, when connected by copper wires, cause a motor to turn many miles away as well. If the wheel at the dam stops, so too does everything connected to that part of the power grid. “That phenomenon, I like to think about a lot. […] It’s just iron and copper. If you took a big long loop of copper and add iron at each end and move the piece of iron, the iron moves at the other [end].”

In a wire conducting electricity, the electrical charge of the atoms is not neutral. The energy derived from, say, a dam, pushes electrons from one atom out, which repels the other electrons along the wire. We can use this energy to move a motor on the far end of the wire or turn on a light.

Start the top video at 22:29 to watch this lesson.

6. The mirror and train puzzle

Feynman described two puzzles he was given by his fraternity brothers at MIT. Why is it that when you look at yourself in the mirror, only the left and right sides are reversed and not the top and bottom of the reflected image? How does the mirror know to flip an image along one axis and not the other? Well, if you were facing a mirror with your nose facing north, the left and right sides aren’t actually flipped—your right hand and your reflected image’s right hand are both in the east. It’s your front and back that have been flipped: Your nose faces north, and your reflected image’s nose faces south.

Feynman thought this was an easy puzzle. A harder one is to ask what keeps a train on a track. When turning a corner in a car, the outside wheels have to go farther than the inside wheels, but cars deal with this using a differential gear, which helps each wheel to turn at different rates. Trains, though, have a solid steel bar between each of their wheels. How does the train stay on the track? The answer is that trains have conical wheels. When a train turns a corner, the inside wheels are riding on the thinner part, meaning they can rotate quickly without going too far, while the outside wheels are riding on the thicker part of the cone, meaning they have farther to go to make one rotation.

Start the top video at 32.05 to watch this lesson.

7. Your eyes are eighth-inch black holes

If a sufficiently intelligent bug were sitting in the corner of a pool, they could, in theory, observe the waves in the pool and determine who had dived in. This is what we do with our eyeballs. Like the bug in a pool, we simply take in this shaking stuff (the electromagnetic field) and can learn which objects have “dived” into our pool.

“There’s this tremendous mess of waves all over in space, which is the light bouncing around the room and going from one thing to the other. Of course, most of the room doesn’t have eighth-inch black holes [our pupils]. It’s not interested in light, but the light’s there anyway.” We can sort this mess out with the instruments we carry around in our eye sockets. Feynman explains that our eighth-inch black holes are only tuned to a small slice of the waves in this pool. But the other waves, bigger ones or smaller ones, we experience as heat or as sound broadcasted from radios. The craziest thing about this to Feynman? “It’s all really there! That’s what gets you!”

Start the top video at 37:46 to watch this lesson.

Scale, whether looking at very small things or very big things, is very difficult to conceptualize. The size of an atom compared to an apple, for instance, is the same as the size of an apple to the size of Earth. Feynman explains how difficult it is to consider very large scales, as well: “There’s a very large number of stars in the galaxy. There’s so many, that if you tried to name them, one a second, naming all the stars in our galaxy, […] it takes 3,000 years. And yet that’s not a very big number. If those stars were to drop a one-dollar bill during a year, […] they might take care of the deficit which is suggested for the budget of the United States. You can see what kind of numbers we’re dealing with.”

Start the top video at 43:43 to watch this lesson.

9. Thinking is kind of nutty

Sometimes, we like to mythologize particularly impressive people, Feynman included. But thinking this way can be limiting. Feynman doesn’t believe there are particularly “special” people — just those who work and study hard. That’s not to say there’s no difference between people, however. “I suspect that what goes on in every man’s head might be very, very different. The actual imagery, or semi-imagery which comes when we’re talking to each other at these high and complicated levels […] We think we’re speaking very well and we’re communicating, but what we’re doing is having this big translation scheme for translating what this fellow says into our images, which are very different.”

Start the top video at 55:01 to watch this lesson.

How power-hungry politicians divide and conquer