A llama named Winter may have played a part in helping scientists find a treatment for Covid-19.

In a pre-proof paper set to be published in the journal Cell on May 5, researchers say they’ve produced an antibody that blocks SARS-CoV-2 from infecting cells. The new antibody, which is based on antibodies produced by llamas, neutralizes a key protein on the virus, called the spike protein. The virus uses this spike protein to invade human cells.

“This is one of the first antibodies known to neutralize SARS-CoV-2,” Jason McLellan, associate professor of molecular biosciences at UT Austin and co-senior author, told The University of Texas at Austin News.

So far, the team has shown only that the antibody works in vitro on a fake version of the coronavirus. (The technical term is pseudotyped, which means a version of the virus that can’t infect people, but does display the spike proteins). The team plans to soon conduct trials on animals, and then, depending on those results, on people. 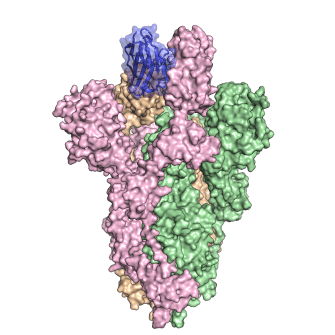 Inspired by a special kind of antibody produced by llamas, researchers created a synthetic antibody dubbed VHH-72Fc (blue) that binds tightly to the spike protein on SARS-CoV-2 (pink, green and orange), blocking the virus from infecting cells in culture. The spike protein structure was discovered by part of the same research team and published in the journal Science on February 19, 2020.

University of Texas at Austin.

The treatment would be an antibody therapy, not a vaccine.

“Vaccines have to be given a month or two before infection to provide protection,” McLellan said. “With antibody therapies, you’re directly giving somebody the protective antibodies and so, immediately after treatment, they should be protected. The antibodies could also be used to treat somebody who is already sick to lessen the severity of the disease.”

The team’s work is based on coronavirus research that began in 2016, when researchers injected Winter with spike proteins of two earlier coronaviruses: SARS-CoV-1 and MERS-CoV. After isolating the antibodies that Winter produced, the team discovered one that was particularly effective at binding to and neutralizing the spike proteins of SARS-CoV-1.

The team wondered whether this antibody might also neutralize SARS-CoV-2. Tests showed that it did—but weakly. So, the researchers linked two copies of that original antibody to form a new one, and they discovered that it effectively neutralized both SARS-CoV-1 and SARS-CoV-2.

“I thought this would be a small side project,” Dorien De Vlieger, a postdoctoral scientist at Ghent University’s Vlaams Institute for Biotechnology (VIB), told The University of Texas at Austin News. “Now the scientific impact of this project became bigger than I could ever expect. It’s amazing how unpredictable viruses can be.” 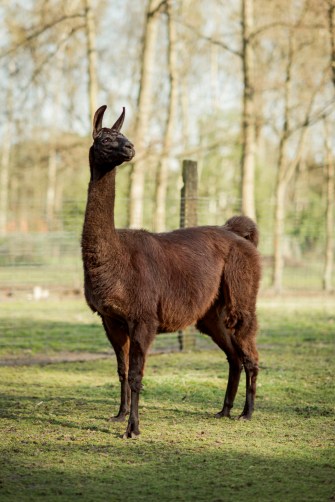 University of Texas at Austin.

The team hopes people will someday be able to receive these antibodies through an inhaler. That’d be possible because llamas produce antibodies in two forms: one that’s similar to humans’, and another that’s about a quarter of the size. These smaller “nanobodies” could be delivered via inhaler.

“That makes them potentially really interesting as a drug for a respiratory pathogen because you’re delivering it right to the site of infection,” Daniel Wrapp, a graduate student in McLellan’s lab and co-first author of the paper, told The University of Texas at Austin News.

The hunt for Covid-19 treatments

There’s currently no cure, vaccine or widely accepted treatment for Covid-19. Doctors and researchers around the world have experimented with various drugs, including hydroxychloroquine, chloroquine and leronlimab, but most results have been mixed at best.

Remdesivir may be the exception. Recent research on this antiviral drug suggests that it can speed recovery for COVID-19 patients. Dr. Anthony Fauci of the White House coronavirus task force said it “doesn’t seem like a knockout 100 percent,” but “it is a very important proof of concept, because what it has proven is that a drug can block this virus.”

A new study looks at what happens when you get infected with two viruses at the same time.
Health

MIT researchers design glue that mimics the sticky substance barnacles use to cling to rocks.
The Present

The risk of dying basically flattens after age 110.
Up Next
Life