The report was eye-opening, to say the least: over 500,000 children have tested positive for the novel coronavirus in America. More than 70,000 of these cases occurred during the last two weeks of August as schools reopened. While most children recover quickly, “several instances” of a rare inflammatory illness has been observed in children.

Fortunately, children under 10 appear to be less likely to spread the virus than teenagers—a counterintuitive finding, since children are, as one doctor phrases it, “germ factories.” Children in the younger age group also show fewer symptoms than teens and adults.

The virus is still new, though researchers have made headway in understanding it. A new study, conducted by scientists at Yale, the Albert Einstein College of Medicine, and Children’s Hospital at Montefiore, has identified key differences in the immune response of children, teenagers, and young adults, compared to adults.

Two cohorts were studied: 60 adult patients and 65 patients under age 24. Twenty patients in the younger group suffered from the novel multi-system inflammatory syndrome (MIS-C) that coincides with COVID-19. This disease is also new, and while most patients survive, it’s proven lethal in a small number of children.

In this study, published in Science Translational Medicine, 22 adults were put on mechanical ventilation, while only five children needed assistance with breathing. Seventeen adults died during the two-month study period; two pediatric patients died as well.

“This is really a call to say rather than waiting to see if we have an effective vaccine for adults, let’s begin that work of at least evaluating the vaccines in adolescents and ever-decreasing ages, so that we get a good lead on the dosing, the dose schedule, and the potential effectiveness of that kind of a vaccine.” 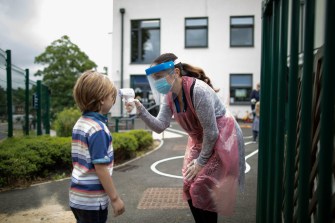 Experts don’t want to place kids at the back of the line, regardless of how strong their immune systems appear. At least one company, Moderna, hopes to begin testing vaccines in pediatric volunteers by year’s end.

Innate immune response is especially high during childhood (compared to adaptive immunity). This makes evolutionary sense: nature wants an animal to survive until its ready to procreate. Turns out the children in the study possessed high levels of cytokines that boost their immune response. The biggest impact is made by IL-17A, which appears to protect the youngest cohort from the ravages of the coronavirus.

This matters for vaccine development. As Herold says,

“Our adult COVID-19 patients who fared poorly had high levels of neutralizing antibodies, suggesting that convalescent plasma—which is rich in neutralizing antibodies—may not help adults who have already developed signs of ARDS. By contrast, therapies that boost innate immune responses early in the course of the disease may be especially beneficial.”

Herold says current vaccine trials are focused on boosting neutralizing-antibody levels. With this new information, researchers may want to work on vaccines that boost the innate immune response instead.

With at least 55 vaccine trials underway, every piece of data matters.

Tags
childrenCOVID-19COVID-19 riskCOVID-19 vaccinemedical researchVaccines
In this article
childrenCOVID-19COVID-19 riskCOVID-19 vaccinemedical researchVaccines
Related
Hard Science
Beyond pain and pressure: 2021 Nobel Prize for medicine awards work on sensory perception
David Julius and Ardem Patapoutian were awarded the highest honor in medicine for their research into how human bodies make sense of and respond to the outside world.
Surprising Science
What happens when two different respiratory viruses infect the same cell?
A new study looks at what happens when you get infected with two viruses at the same time.
Thinking
Gray zone: when is it best not to save a life?
Medical science can save lives, but should it do so at the cost of quality of life?
Health
Barnacles inspire a blood-repelling tissue glue for sealing wounds faster
MIT researchers design glue that mimics the sticky substance barnacles use to cling to rocks.
The Present
MIT engineers design touch-sensing glove that ‘feels’ pressure and maps stimuli
The design could help restore motor function after stroke, enhance virtual gaming experiences.
Up Next
Health
Study calls out the genes that make cancer cells so hard to kill
Researchers from the University of Toronto published a new map of cancer cells’ genetic defenses against treatment.