In 2008, University of Washington professor David Baker created the Foldit research project. As a protein research scientist he had spent a good portion of his career designing methods to predict three-dimensional structures associated with proteins. His group initially developed an algorithm for protein structure prediction called Rosetta, which they then turned into a distributed computing project.

The initial incarnation, Rosetta@home, allowed citizen scientists to help out, much as astronomy enthusiasts have crowdsourced research and discovered new planets. Foldit is the evolution of Rosetta@home. Upon the project’s launch it boasted 240,000 registered users. By gamifying protein folding, Baker’s team helped the field of citizen science blossom.

There have been many rewards. Since its launch, Baker’s team has posed over 2,000 design puzzles to their community. Foldit players helped to solve a 15-year problem relating to a monkey virus in 2011. The following year, gamers successfully redesigned a protein initially created by Baker’s team. Now this community is being asked to help out with another daunting task: solving the coronavirus problem.

While most Americans are self-isolating, which certainly helps stop the spread of COVID-19, Baker is asking Foldit gamers to help hunt for proteins that could stop the virus in its tracks. They’re specifically seeking proteins that block the viruses’s entry into new cells upon entering the human body. If successful, new antiviral drugs could be developed that would reduce the symptoms once you’re infected.

Brian Koepnick, who works in Baker’s lab and helps run Foldit, says the diversity of responses they receive to problems posed is a necessary step in discovering new solutions.

“We find that the creativity of crowdsourcing is really, really useful—if you ask 100 people to do something, they’ll do it in 100 different ways. That’s really valuable for us in protein design problems.”

As COVID-19 plagues the entire planet, driving fear and uncertainty in citizens, at least there is precedent for this disease. We know that this type of virus infects cells through its spike protein, which latches onto certain cells and proliferate. Baker says that a protein that “grabs the coronavirus’s spike protein might be able to run interference,” preventing it from attaching to other cells and spreading.

Every puzzle Baker’s lab publishes is online for roughly a week. They work with up-to-the-minute information about COVID-19; thus, the team is constantly updating its puzzles. According to Baker, a few entries seem promising—there have been 20,000 different designs submitted already—though as with any treatment, each design will require real-world testing.

Baker notes that they’ve successfully crowdsourced strategies for dealing with flu, which brings hope that a treatment could be found in this situation. “In general, the coronaviruses appear to mutate less than influenza viruses. So that makes them a little bit easier of a target.” 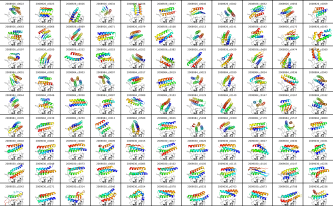 Foldit players have come up with more than 20,000 different designs for potential COVID-19 antiviral proteins. Scientists plan to test 99 of the most promising designs (shown here) in the lab.

This is truly an unprecedented moment in history. While researchers have worked on pandemics across the planet before, there has never been such a sense of urgency. Our global response to this coronavirus is likely to set the stage for how we treat diseases of this magnitude in the future. And as science writer Ed Yong says, there is reason for hope.

“The first steps so far have actually been encouragingly quick. A vaccine candidate has already entered early safety trials after a record breakingly short time from actually identifying and sequencing the genome of this new virus.”

There is a long road from trials to implementation, Yong says. We’re 12 to 18 months away from a vaccine. Still, the rapidity of this process has been aided by the sheer number of researchers simultaneously working on the problem.

Give the number of players on Foldit’s platform, it’s not about expertise as much as, in Baker’s words, persistence and ingenuity. Citizen science is one of the greatest benefits of the digital age. In many ways, platforms like Foldit are leading the way to a new form of education. If you’re interested in contributing, download the software and start playing.

The James Webb Space Telescope finally could answer the age-old question of whether we are alone in the universe.
Hard Science

Water on Mars is key for human survival on the Red Planet, not just for drinking but for growing food and making fuel and oxygen.
Hard Science

If you put very fine black powder powder in a confined space it explodes in a cloud of heat, gas and noise.
13.8

Why Earth is habitable but Venus looks like hell

Venus has far more carbon dioxide in its atmosphere than Earth, which turned our sister planet into an inferno. But how did it get there?
Up Next
Neuropsych