It’s no longer illegal to smoke marijuana in 10 U.S. states and its medical use is allowed in 33. In Colorado, it’s been fully legal since 2014, with a variety of THC — the active agent in grass — products available for sale. A new study, however, looks to harsh the buzz: There’s been a dramatic rise in emergency-room visits for cannabinoid hyperemesis syndrome, or CHS.

It’s a condition characterized by stomach pain, extreme nausea, and repeat vomiting. Researchers’ concern is exacerbated by the assumption that if this many people are showing up at ERs, many more are likely to be dealing with it on their own. Part of the appeal of marijuana has always been how unlikely it is that you’ll overdose on it. Doctors don’t yet know exactly what’s going on. 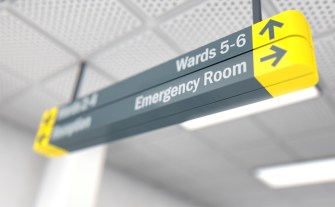 Clinicians in Colorado are convinced that the syndrome is connected to marijiuana consumption, though they’re not sure how. About 25.7 percent of the CHS ER cases — that’s 2,567 patients — occurred after smoking weed, and 9.3 percent were from edible cannabis. The data tracks visits between January 2012 and January 2016.

Interestingly, patients who’d eaten grass were more likely to arrive at the ER with acute psychiatric symptoms, intoxication, and cardiovascular issues. Edible cannabis, in general, sent a disproportionately high number of high people to the hospital: While only 0.32 percent of Colorado cannabis sales are for edible varieties, it resulted in 10.7 percent of hospital visits.

CHS was first identified in 19 South Australian patients in 2004, chronic chronic users who’d been lighting up for decades. A second 2018 study of ER patients in New York City found CHS most likely to appear in patients who used pot at least 20 days each month for five or more years, and multiple times each day. Extrapolating from the local data, the study’s authors concluded that it may — in these days of expanded legalization — affect somewhere from 2.13 to 3.38 million Americans annually.

In the South Australian study, doctors suggested a possible immediate cause for CHS: A hypothalamic-pituitary reaction to cannabis. They found that among long-time cannabis users, “One logical explanation for this might lie with marijuana’s effect on the limbic system of the brain, particularly at the hippocampal-hypothalamic-pituitary level. A hypothalamic action is further supported by evidence that chronic cannabis use affects the secretion of pituitary hormones, suppressing growth hormone, follicle stimulating hormone, and luteinising hormone, with documented pubertal arrest.” 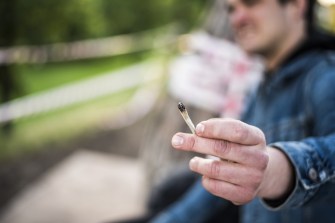 What to do if symptoms arise

If you’ve consumed cannabis and begin experiencing severe stomach pains, nausea, or start vomiting, there is a home “cure” many victims have found at least temporarily helpful: A hot bath or shower can alleviate the symptoms. The relief lasts only until one leaves the water, though, and also tends to diminish in effectiveness over repeat episodes.

This fits the hypothalamic hypothesis, since, says the 2004 study, “Cannabis toxicity may disrupt the balanced equilibrium of satiety, thirst, digestive, and thermoregulatory systems of the hypothalamus and this disruption might settle with hot bathing or showering.”

Even if the mechanism of CHS isn’t yet clear, there’s just one agreed-upon cure for CHS: If you start experiencing its symptoms, stop using marijuana altogether.

Are you in love? Trust your mother over your brain.
▸
with
Big Think
Up Next
Think Again Podcasts

Love, grief, and moral disgust aren’t unique to humans. Like chimps, humans sometimes struggle for dominance, but our first impulse is trust and connection. Frans de Waal has spent decades showing that most of what we believe about animals, humans, and the differences between us is wrong.