PTSD develops after a person experiences, or is a witness to, a life-threatening or traumatic event — a natural disaster, for example — or is exposed to combat, or sexual or physical abuse. Symptoms can include and range from anxiety, insomnia and hypervigilance, to struggling with disturbing memories, or managing emotions and behaviors.

In a YouTube video, titled, U.S. Vets with PTSD Smoke Weed, military veterans, seated next to one another detail the pain of living with PTSD. The clip has already attracted nearly two million views. Off camera, a man asks the group about PTSD.

With his eyes downcast, one man, wearing an Army t-shirt, weighs in first, “The anxiety is there, and I’ve come to peace after this many years of dealing with therapy, that it’s never going to completely go away,” he said. Dan, seated in the middle, offers, “I just kinda check out sometimes,” his hands folded, resting on the table. “Posttraumatic stress disorder, is, a fucking thorn in my side,” veteran number three finally sums up his experience. 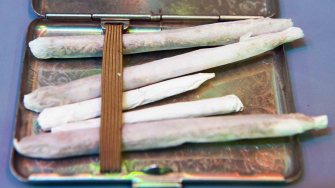 One sunny afternoon, a year after Air Force veteran Colleen Bushnell told military authorities that she had been sexually assaulted, allegedly by a fellow service member, Bushnell was in southern California to visit a friend. Clouds plucked from a marshmallow bag hung low from the cerulean sky, while the ocean’s waves crashed along the shore. The fresh air, cool breeze and the bed of Bushnell’s friend beckoned her weary body and mind; it was time to relax.

In 2004, Bushnell, was diagnosed with Posttraumatic Stress Disorder stemming from the attack. A dizzying array of treatments are available for people, diagnosed with PTSD, from cognitive and behavioral therapies to prescription drug treatments, and holistic or alternative remedies, including medical marijuana.

When Bushnell arrived at her friend’s California home, she hadn’t slept in more than two days. Her friend, who was also a military veteran, had been severely injured in Afghanistan, and suggested Bushnell use edible cannabis. “I had never used marijuana. I’m very much against using illegal substances,” recalled Bushnell. “I’m a mother and want to set a good example, but for the first time in years, I could sleep and for a moment, there was no [emotional] pain.”

There is now a clear majority of states that have comprehensive medical marijuana laws on the books – 28 states, plus the District of Columbia, according to Tom Angell, the founder of Marijuana Majority, a 501c3 public education non-profit, medical marijuana advocacy organization. He says, in many of those states, PTSD is a qualifier to legally obtain medical marijuana, but military veterans diagnosed with PTSD, and whose medical care is provided by the Department of Veterans Affairs (VA), face unique challenges. 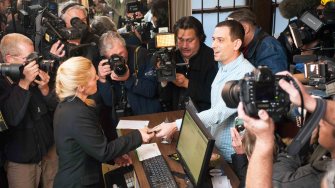 The last thing TJ Thompson remembered before waking in a hospital emergency room was approaching the ship he did not want to board. One afternoon, in 2001, following an appointment with his psychiatrist, the Navy sailor was set to return to duty, but as he drove closer to the naval station, his thoughts betrayed him. “I tried to swallow all my pills that I had on the ship and slit my wrists a bunch of times.” Thompson said from his home, near Virginia Beach, Virginia. At the time of his suicide attempt, he was taking daily doses of Zoloft and Gabapentin, for depression and anxiety.

While recovering from his second attempt at suicide, clinicians recommended yet another cocktail of prescription drugs, but Thompson found relief elsewhere. “I had some friends, in the restaurant industry, say, look, you need to get off these pills, and this is how you’re going to do it,” said Thompson. He now uses marijuana multiple times a day.

“My preferred method, [the] way I use it the most, is just smoking it out of a bong,” Thompson said. “For me, on an average day with not a lot of stressors involved, probably every two-and-a-half to three hours,” he continued. “I might just take a couple of hits off of a bong — It’s probably maybe between a quarter and a half a gram of marijuana.” 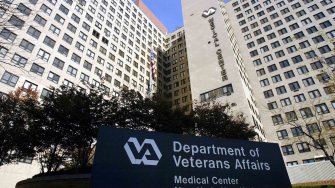 The exterior of the Veterans Affairs Hospital is seen in New York City. (Photo by Spencer Platt/Getty Images)

Dr. Paula Schnurr, the Executive Director of the VA National Center for Posttraumatic Stress Disorder estimates of the nearly twenty-million veterans nationwide, “close to six million” receive their healthcare at VA run medical centers, and approximately 10% of that population are being treated for PTSD. Researchers at the organization have not examined the “overall Veteran population,” but among those using VA medical centers, and diagnosed with PTSD, each year cannabis use is steadily rising.

Despite the growing popularity and marketing of medical marijuana, Dr. Schnurr says the science hasn’t caught up with the claims of its supporters. “I’m extremely surprised that people think that the research is there,” said Dr. Schnurr. “It has been very challenging to do this kind of research on marijuana for any condition, and not just PTSD.”

She suggests more studies are needed to prop up the claims that marijuana effectively treats PTSD. “What we need in order to say a drug works or a type of psychotherapy works is multiple well-done studies in which people are randomized to treatment, and there’s an appropriate control,” she said. “In drug studies, you need placebo control, and the idea is that in the drug studies that the patients and the clinicians don’t know whether a person is getting drug or placebo. So already for marijuana, it’s challenging to do that work, because of the euphoric effects of most preparations,” added Schnurr.

This summer, Colleen Bushnell, the military sexual assault survivor, who still seeks treatment to address the emotional wounds from the sexual assault, and her fiancée moved from Texas, to Buckeye, Arizona. They wanted to settle in a state where local medical marijuana laws were in their favor. The nation’s Drug Enforcement Administration (DEA) considers marijuana a Schedule I drug; it is illegal, even for medical use. “It bothers me, that [I’m] still violating federal law,” said Bushnell.

TJ Thompson is advocating for changing the law. “My kids were able to see that progress. They saw me go from being locked in the bedroom all the time, not being able to talk to them without yelling at them,” said Thompson, who is now a culinary chef, “to being successful in my education path, being able to work with people, being able to go and stand in front of the Senate press gallery.” 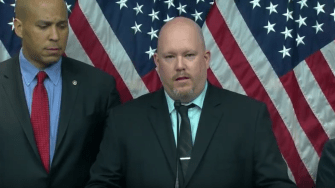 T.J. Thompson, military veteran and advocate for medical cannabis speaks during a press conference with Senator Cory Booker, D-NJ, to support a new medical marijuana bill at the US Capitol on March 10, 2014 in Washington, DC. The Compassionate Access, Research Expansion and Respect States (CARERS) Act would reclassify marijuana from a Schedule I to Schedule II drug and would amend federal law to allow states to set their own medical marijuana policies.

Despite more than a decade of honorable service in the military, every time he seeks escape from the symptoms surrounding his PTSD and utilizes marijuana, Thompson is considered a criminal. For his children’s sake, it’s a label that carries a heavy burden. “They’ve seen my healing path, so they understand, and they understand that [for me] it is a medicine.”

The DEA announced plans to begin allowing researchers to use marijuana grown outside its facility in Mississippi. Medical marijuana advocates saw it as a step forward, but the federal agency still fell short of supporting a proposal that would remove cannabis from a list of its most dangerous category of narcotics.

“If it treats anxiety and it gives me a moment of peace, I’m all for it,” says the veteran, in the U.S. Vets with PTSD Smoke Weed video. Moments later, after a bong is presented to the three men sitting at the table, one of the veterans grabs a lighter, lights the green glass bong, and then inhales. A cough follows, as the bong is passed to another man in the group. A graphic appears, “5 minutes later,” and the veteran who initially described his life with PTSD as a “thorn in my side,” folds his arms and succinctly details his current state of mind, “I’m happy.”

Christina Brown Fisher is an independent multimedia journalist, based in New York City. She is an U.S. Air Force Veteran. Christina is also a Traumatic Brain Injury (TBI) survivor, and has been diagnosed with Posttraumatic Stress Disorder.

Cannabidiol (CBD) seems to reduce the unpleasantness of pain, a finding that surprised the researchers behind a new, first-of-its-kind study.
Health

How will psychiatrists administer psychedelic treatments?

As a new industry emerges, therapists need to be educated.
Neuropsych

10 things you may not know about anxiety

Cold hands and feet? Maybe it’s your anxiety.
The Present

A new study shows that beauty standards affect whether or not accusers are believed.
Neuropsych

TRAPPIST-1 is 40 light years from Earth. It would take us millions of years to get there.