The dirtiest drug I ever tried was ketamine. Besides having a general aversion to snorting powder, I vividly recall one evening in 1995 when, after ingesting a hearty dose of the anesthetic, I could no longer tell the difference between standing, sitting, and lying down. Fortunately I was in a safe environment; the effects eventually wore off, my relationship to gravity restored. The following morning was rough, causing me to swear off the drug forever.

Bad experiences create aversions. There are too many horror stories to count about the curious traveler landing in Los Angeles to partake in recreational marijuana who ends up eating fifty milligrams when five would have sufficed. Once that experience is locked into memory it’s doubtful you’ll ever enjoy an edible again. Dosage matters. If you’re not careful, you’re writing off a potential beneficial therapy due to ignorance and over-enthusiasm. Getting back on the horse, as it goes, takes a certain determination.

Ketamine isn’t actually dirty, I just took too much. Others are finding a lot of benefit to the chemical. The recent uptick in clinical cases promoting ketamine as an antidote to suicidal thinking is one such victory. 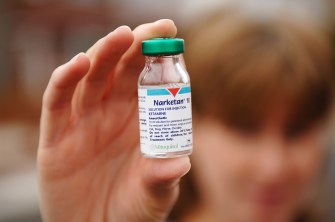 A person holding up a bottle of Ketamine, Horse tranquilliser, UK 2006

This isn’t exactly new. In June, 2017 I covered this study, discussing the means by which ketamine works:

Ketamine is responsible for blocking the N-methyl-D-aspartate (NMDA) receptor, which causes an immediate alleviation of depressive effects, while another metabolite in the drug helps the effects last for hours. This blockage is also what causes the hallucinogenic effects.

First synthesized in 1962 by Wayne State University chemistry professor, Calvin Stevens, it was first tested on human prisoners (following animal trials). Regardless of the ethics of testing on the prison population, it was approved for clinical use by the FDA in 1970. Shortly thereafter it was used an anesthesia in the Vietnam War.

Ketamine was also immediately used outside of clinics and hospitals, quickly “discovered” by the psychedelic community. By the time I stumbled into it in the nineties, it was synonymous with ecstasy on the rave scene. It wasn’t until 1999 that the US government labelled it as a federally controlled substance. It has never been an especially blacklisted drug, not to the level of other clubbing substances.

Now, with life expectancy dropping in America for the second straight year due to the opioid crisis and increased rates of suicide, ketamine is being looked at more closely. There is no single reason for these data about declining life spans, Moises Velasquez-Manoff writes in the NY Times,

The trend most likely has social causes — lack of access to mental health care, economic stress, loneliness and despair, the opioid epidemic, and the unique difficulties facing small-town America. These are serious problems that need long-term solutions. But in the meantime, the field of psychiatry desperately needs new treatment options for patients who show up with a stomach full of pills.

How A Drug Helps Me Cope With My Kids’ Suicides

Ketamine might be that treatment, he continues, noting that it has been shown to “halt suicidal thoughts almost immediately.” Not that there aren’t hurdles to overcome. Cultural associations are one, but there is evidence that ketamine causes brain damage, cystitis, and persistent hallucinations in abusers. Abuse is key here. Like my dreadful evening, too much is too much.

Current treatments for depressive and suicidal disorders can take weeks to months to kick in, however, some of which actually increase the likelihood of suicide. Velasquez-Manoff writes that ketamine operates differently from antidepressants by working on the brain’s glutamate system rather than the serotonin system—most of the body’s serotonin is produced in the gut, anyway.

Animal research suggests that partly blocking certain glutamate receptors increases brain plasticity — the ability of the brain to make new neuronal connections — and corrects some of the abnormalities that result from chronic stress. These salutary effects on the brain, coupled with how quickly ketamine works, have inspired a flurry of research.

The hallucinations present another hurdle for clinical usage. If you’re not accustomed to such mind states, doing so while lying back in a doctor’s chair might not be the place to start. Or…it might be. “Setting” has long been an integral part of the psychedelic experience, as important to the outcome as strength and dose of the substance. Feeling safe under the guidance of an experienced professional might allow for mind wandering without the accompanying fear.

Which has, in fact, always been a part of the psychedelic experience. Ayahuasca should not be consumed alone or out on the scene; the shamanic ritual is a necessary component. Separating substance from context is certain to result in a terrifying experience, which is a shame given the potential therapeutic applications of these substances.

Ketamine might not have the stamp of approval yet, but the fact that it’s being treated seriously is a good start. We know our current drug program is not working. All options should be on the table. That we live in one of the most advanced civilizations ever, with a wealth of resources and information, yet cannot take care of an increasing number of citizens is problematic. There is no singular solution, so we have to exhaust all possibilities.

OCD and addiction may result in part from improper “reward” pathways in the brain. Ultrasound can disrupt those pathways.
Up Next
Health