A man in China’s inner Mongolia region was infected with bubonic plague, according to health officials.

The infection occurred in the city of Bayannur, located northwest of Beijing. City officials declared a citywide Level 3 plague-prevention warning, the second lowest in a four-tier system, and said it’ll remain in place for the rest of the year. The warning advises people against hunting, eating, or handling infected animals, particularly marmots.

“At present, there is a risk of a human plague epidemic spreading in this city,” the local health authority said, according to state-run newspaper China Daily. “The public should improve its self-protection awareness and ability, and report abnormal health conditions promptly.”

Bubonic plague is the same infectious disease that caused the Black Death, which killed more than 50 million people in the 14th century. The infection is mainly spread by fleas that bite infected animals. When infected fleas bite humans, the bacterial infection spreads through lymphatic vessels to a lymph node, which can cause swelling, high fevers, delirium, and death. Left untreated, the infected can spread to the lungs, where it can become the pneumonic plague, a more severe form of the disease that’s always fatal without intervention. 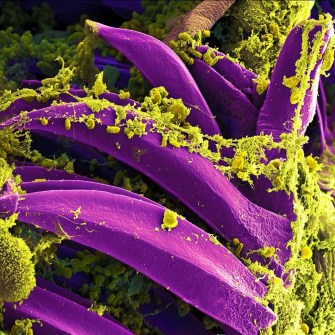 Today, bubonic plague can be treated effectively with antibiotics.

“Unlike in the 14th century, we now have an understanding of how this disease is transmitted,” Dr. Shanthi Kappagoda, an infectious disease physician at Stanford Health Care, told Healthline. “We know how to prevent it — avoid handling sick or dead animals in areas where there is transmission. We are also able to treat patients who are infected with effective antibiotics, and can give antibiotics to people who may have been exposed to the bacteria [and] prevent them [from] getting sick.” 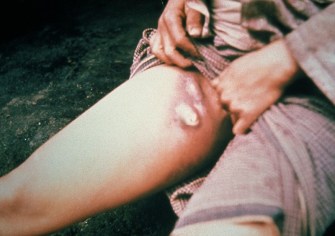 This plague patient is displaying a swollen, ruptured inguinal lymph node, or buboe.Centers for Disease Control and Prevention

Still, hundreds of people develop bubonic plague every year. In the U.S., a handful of cases occur annually, particularly in New Mexico, Arizona and Colorado, where habitats allow the bacteria to spread more easily among wild rodent populations. But these cases are very rare, mainly because you need to be in close contact with rodents in order to get infected. And though plague can spread from human to human, this only occurs with pneumonic plague, and transmission is also rare.

Last week, researchers in China also reported another public health concern: a new virus that has “all the essential hallmarks” of a pandemic virus.

In a paper published in the Proceedings of the National Academy of Sciences, researchers say the virus was discovered in pigs in China, and it descended from the H1N1 virus, commonly called “swine flu.” That virus was able to transmit from human to human, and it killed an estimated 151,700 to 575,400 people worldwide from 2009 to 2010, according to the Centers for Disease Control and Prevention.

There’s no evidence showing that the new virus can spread from person to person. But the researchers did find that 10 percent of swine workers had been infected by the virus, called G4 reassortant EA H1N1. This level of infectivity raises concerns, because it “greatly enhances the opportunity for virus adaptation in humans and raises concerns for the possible generation of pandemic viruses,” the researchers wrote.

Popular diets view health as a calorie-crunching equation while excluding a critical variable: mental wellness.
Up Next
Starts With A Bang

NASA Rover Captures What A Solar Eclipse Looks Like On Mars

As captured just this year from Mars’s surface, eclipses of Phobos (L) and Deimos (R) can lead to spectacular annular, but not total, solar eclipses. (NASA/JPL-CALTECH/MSSS/KEVIN M. GILL) From the right […]