Few creatures have captured the attention of both the general public and scientists as thoroughly as a peculiar-looking salamander known as the axolotl. Native only to Lake Xochimilco, south of Mexico City, axolotls are less and less frequently found in the wild. However, they are relatively abundant in captivity, with pet enthusiasts raising them due to their alien features, such as the striking, fringy crown they wear on their heads. Researchers also keep a large supply of axolotl in captivity due to the many unique properties that make them attractive subjects of study.

Perhaps the most notable and potentially useful of these characteristics is the axolotl’s uncanny ability to regenerate. Unlike humans and other animals, axolotls don’t heal large wounds with the fibrous tissue that composes scars. Instead, they simply regrow their injured part.

“It regenerates almost anything after almost any injury that doesn’t kill it,” said Yale researcher Parker Flowers in a statement. This capability is remarkably robust, even for salamanders. Where regular salamanders are known to regrow lost limbs, axolotls have been observed regenerating ovaries, lung tissues, eyes, and even parts of the brain and spinal cord.

Obviously, figuring out how these alien-looking salamanders manage this magic trick is of great interest to researchers. Doing so could reveal a method for providing humans with a similar regenerative capability. But identifying the genes involved in this process has been tricky — the axolotl has a genome 10 times larger than that of a human’s, making it the largest animal genome sequenced to date.

Fortunately, Flowers and colleagues recently discovered a means of more easily navigating this massive genome and, in the process, identified two genes involved in the axolotl’s remarkable regenerative capacity. 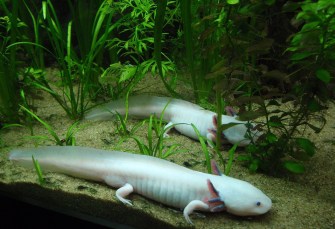 A new role for two genes

We’ve understood the basic process of regeneration in axolotls for a while now. After a limb is severed, for instance, blood cells clot at the site, and skin cells start to divide and cover the exposed wound. Then, nearby cells begin to travel to the site and congregate in a blob called the blastema. The blastema then begins to differentiate into the cells needed to grow the relevant body part and grow outward according to the appropriate limb structure, resulting in a new limb identical to its severed predecessor.

But identifying which genes code for this process and what mechanisms guide its actions is less clear. Building off of previous work using CRISPR/Cas9, Flowers and colleagues were able to imprint regenerated cells with a kind of genetic barcode that enabled them to trace the cells back to their governing genes. In this way, they were able to identify and track 25 genes suspected to be involved in the regeneration process. From these 25, they identified two genes related to the axolotls’ tail regeneration; specifically, the catalase and fetub genes.

Although the researchers stressed that many more genes were likely driving this complicated process, the finding does have important implications for human beings — namely that humans also possess similar genes to the two identified in this study. Despite sharing similar genes, the same gene can do very different work across species and within a single animal. The human equivalent gene FETUB, for example, produces proteins that regulate bone resorption, regulates insulin and hepatocyte growth factor receptors, responds to inflammation, and more. In the axolotl, it appears that regulating the regenerative process is another duty.

Since humans possess the same genes that enable axolotls to regenerate, researchers are optimistic that one day we will be able to speed up wound healing or even to completely replicate the axolotl’s incredible ability to regenerate organs and limbs. With continued research such as this, it’s only a matter of time until this strange salamander gives ups its secrets.

Virtually all the statistical methods researchers commonly use assume potential mating partners decide who they will have children with based on a roll of the dice.
Thinking

The genes responsible for facial features may also influence behavior.
Up Next
Health

Could there be an ‘exercise pill’ in the future?

What if we could just skip the workout part and take the results in supplement form? Researchers did it… On mice and flies.