It takes an average of 7.5 months to build a new home. Even the smallest of domiciles — cabins, micro homes — usually take months to construct. But the Ukrainian startup PassivDom has cut that time down to as few as 8 hours by using a 3D-printing robot to print autonomous, mobile homes for $64,000 each.

The robot only prints the walls, floor and roof of the 410-square-foot homes, while human workers later install the windows, doors, plumbing, and electrical systems. Also, the 8-hour timeframe only applies to the company’s most basic model. Still, since its launch in early 2017, PassivDom has already received more than 8,000 preorders for the homes in the U.S. alone. 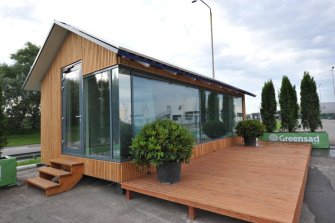 The most expensive model comes equipped with appliances, furniture, heating and cooling, and a smart ventilation system.

The top-tier model also allows owners to manage every system in the house—including cloud-based video surveillance—through a smartphone app. 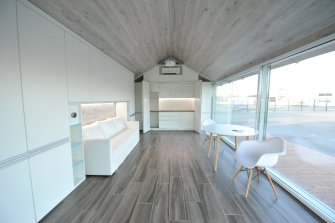 The house features floor-to-ceiling windows and a small kitchen. 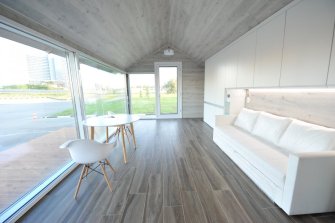 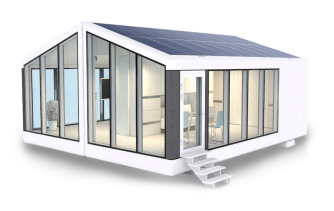 Every model is equipped to live off the grid with a solar cell-integrated roof, and the more expensive models include battery storage. 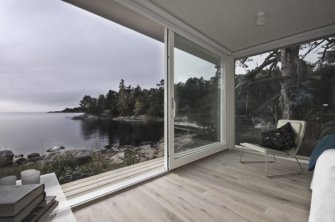 “We should have opportunities to live in nature away from civilization, but have comfortable conditions of a traditional house,” PassivDom designer Maria Sorokina said to Business Insider. “This technology can allow us to live in the woods, on mountains, or on the shore—far away from people and infrastructure.” 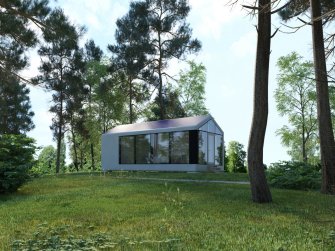 While the simplest model can take just 8 hours to complete, the more advanced homes can take up to a month to install all of the features. 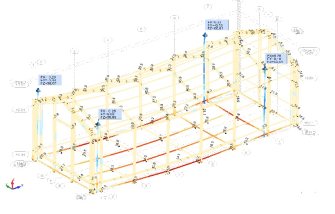 “Over 100 million people do not have a roof over their heads,” Sorokina said. “It is necessary to build more affordable houses.”

Tags
3d printed homes3d printingcabinsmicrohomesmobile homesoff-gridoffgridroboticssolar power
In this article
3d printed homes3d printingcabinsmicrohomesmobile homesoff-gridoffgridroboticssolar power
Related
The Present
Krispy Kreme donuts to be filled, frosted, and packaged by machines
Automation could help fix the company’s financial troubles.
The Future
McDonald’s opens its first highly automated restaurant in Texas
The automated McDonald’s has a staff comparable to other stores. But the crew members are all focused on making and packaging orders instead of delivering them.
Thinking
Killer robots and the banality of evil
“Lethal autonomous weapon” sounds friendlier than “killer robot.”
The Future
Making computer chips act more like brain cells
Flexible organic circuits might someday hook right into your head.
Thinking
Why don’t robots have rights?
In the future, people may look back with horror at how humans treated AI in the 21st century.
Up Next
Health
What Happens to Your Body When You Donate it to Science?
There are a lot of aspects to leaving an “anatomical gift” which one might find surprising.