One of the morbid fascinations some people have is what’s going to happen at their funeral and with their mortal remains after they’re gone. There are a lot of boutique options, besides the traditional things like being buried, which is expensive and not good for the environment.

There’s an urn that’ll turn your body into a tree, and many options after cremation. You can turn your ashes into a diamond, a vinyl record (that can be played), put into fireworks for a display, or as part of a coral reef. And of course, there’s the orbital space flight option, allowing your ashes to burn up in reentry.

But aren’t all of these a waste in the end? Medical science only has so much access to the human body. Though it sounds clichéd, donating your body to science may be the most selfless act of all. The trouble is, for most people, their thought process on the subject ends there, at donation. The reality is, that’s just the beginning. So what happens when you donate your body to science?

After making your donation, assuming it’s accepted, your body could end up in one of a number of different places. Once the application is complete, your say in the matter ends. Most of us picture nervous medical school students hovering over a cadaver, ready to practice a specific procedure. That’s likely. But equally as likely is a medical researcher testing out a new treatment or surgical technique.

In some cases, fitness instructors may use your “anatomical gift” for research or plastic surgeons for practice. They are also used in forensic science (warning: graphic images) to study human decomposition, which ultimately helps forensic scientists catch the bad guys—even if the way it’s done is difficult to stomach. You can make suggestions on where you’d like your body to go or how it should be used, but ultimately, it’s up to the medical institution to decide. 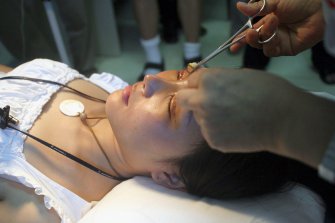 There are several places you can donate your remains. A university is often chosen, but private enterprises exist as well. There are professional organizations you can contact, such as the American Association of Tissue Banks (AATB) and the International Institute for the Advancement of Medicine. Those who are interested should go for an AATB accredited institution, which means they operate on the highest code of ethics and standards. Despite Western medicine’s reputation for being cold and unfeeling, today medical schools teach students to treat donated cadavers with the utmost respect.

At the University of Michigan, Director of the Anatomical Donations Program, Dean Mueller, put it like this, “We’re here to promote science and education, but we’re here to promote it in a respectful way.” It’s not like a horror movie. The place where the bodies are kept is spotless, well-lit, and ventilated. While in anatomy classes, each cadaver is covered with a sheet to promote respect for the deceased as well as to maintain sterility. The students are also told about the importance of the donor and to reflect on the sacrifice this person has made to their education.

Students at Mercy College in Dobbs Ferry, New York go one step further. They recently held an Anatomical Donor Appreciation Ceremony. Poems were read, a slideshow with music was played, and students paid tribute in other ways to their “silent mentors.” Relatives of the deceased were even invited to attend. 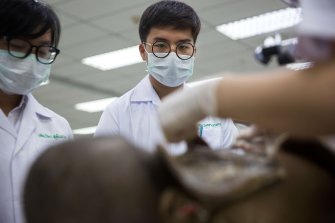 Medical school students are told to consider their “silent mentors” with the greatest respect and reverence. Credit: Getty Images.

Demand far exceeds the number of donations today. One reason is high standards. Whole body donation company BioGift Anatomical, only takes about 30% of donations among those who inquire, according to lab manager Michael Pierre. Interested parties are asked a number of medical questions which eliminates many potential donations. Generally, these are the same questions used industry-wide, and have mainly to do with filtering out those with a communicable disease such as HIV, hepatitis C, syphilis, and more. A traumatic injury to a significant amount of tissue may also warrant refusal.

Sometimes, the people themselves register. But in cases of Alzheimer’s, a close loved one may do so. Still, the majority of donations occur after death and an extensive screening process occurs before it is accepted. Besides an exhaustive line of questioning, the body is tested for communicable diseases. A small number come back positive and in these cases, the family is notified.

Once accepted, the transportation and storage arrangements are made and the donor organization looks to see where the gift can best be put to use. The remains are of course embalmed, while those tissues which can’t be used are cremated. Though the body still breaks down, a preserved one can last anywhere from 18 months to 10 years. Once the medical school students or researchers are done with it, a memorial service is held, usually once a year.

Besides contributing to progress, there is another worthwhile benefit. Your next of kin saves on funeral expenses, which are astronomical these days. Yet, that’s not why most people donate, according to Melinda Ellsworth. She’s Vice President of Donor Services at Science Care—one of the largest operators in the industry. “Everybody has a specific story,” she told Medical Daily, “either their loved one was suffering from a particular illness or they want to help other people live longer and healthier lives.”

To learn what happens to your brain when you donate it to science, click here:

Only 2% of Alzheimer’s is 100% genetic. The rest is up to your daily habits.
▸
9 min
—
with
Lisa Genova
Up Next
Politics & Current Affairs

A Government Is Handing out $59,000 to Anyone Who Buys a Tesla Truck

Tesla’s all-electric semi-truck is getting some big first orders and government help.