Ramen noodles: the mainstay of broke students, bad cooks, and the working poor everywhere. Designed to have a long shelf-life, the high salt content of these noodles is well known, with a single brick of the noodles having more than half of the FDA-recommended daily sodium intake. Such a high salt content is a common thing among processed foods, and has been an element of the noodles since they were introduced in the seventies.

However, a bit of good news is coming for those who are concerned about convenience and healthy living.

The Nissin company, who produce the best-known version of the noodles in the United States, has announced that its ramen noodles will now be produced with less salt. The company says that it has “reduced sodium by an average of 15% across all flavors” and removed added MSG entirely.

They have also announced that the labeling will be changed on all packaging to better highlight which options are vegetarian and which are not. This is in response to the increasing numbers of people who adhere to vegetarian diets — many food companies are now working to get their business. It’s a sign of the times that even cheap meals are trying to sell themselves by appealing to vegetarians. 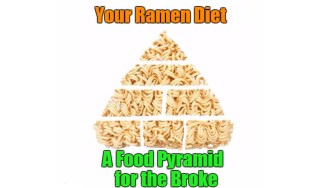 But, I don’t eat this stuff, why should I care?

The average American gets almost double the recommend amount of salt in a given day, most of it added to the food during processing. As too much salt can lead to a slew of health problems, including high blood pressure, this reduction could go a long way to improving the health of millions of Americans.

Now, this isn’t to say that ramen is going to be the next superfood. They are still high in salt and low in fiber, protein or nutrients, and have many of the hallmarks of a junk food. However, as 75% of all salt consumed by Americans is added in during food processing, even a slight improvement could go a long way to helping hundreds of thousands of people avoid heart attacks and strokes each year.

As people become more and more health conscious, even the cheapest, most heavily processed foods we eat are liable to change to make up for this fact. Will ramen be eaten by all the chic-est and health-focused individuals? Probably not, but the change is for the better.

Practice doesn’t actually make perfect. Here’s the willpower equation necessary for elite athletes and musicians.
▸
4 min
—
with
Wendy Wood
Up Next
Starts With A Bang

The return of Harry Mudd, in spectacularly chaotic fashion, puts the crew of the Discovery to the test in terms of teamwork like never before. Image credit: Michael Gibson/CBS © […]