No Country for Frumpy Women 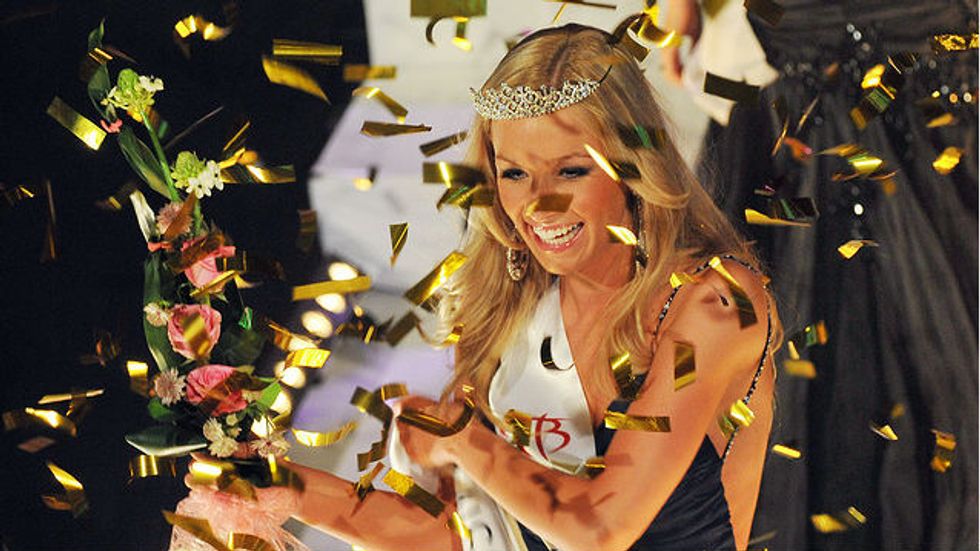 Have you noticed how women in almost every professional field today are subjected to a hotness rating?

Here’s a rating of the sexiness of women in academically elite colleges. Then there’s the fellow who wrote a blog a few weeks ago listing hot female authors he wouldn’t mind sleeping with (they’re queuing up outside his door right now, I’m sure).

I hear told that terminally fatuous marketing departments in commercial publishing houses covet sexy female novelists. Publicity photos certainly suggest that this is true. A fellow writer once told me about a first-time novelist who wrote a beautiful book. It created a lot of pre-publication excitement with her publisher. They planned a big publicity spree—until she appeared in person. They trimmed back their publicity plans substantially because she was heavy-set. Her putatively un-beautiful looks overruled the beauty of her book. This strikes me as particularly sad, and venal. The page should be an alternative world that’s held to its own criteria.  It’s an old-fashioned idea, one that I defend proudly, that the canvas or the book or the professional achievement has nothing to do with your physical appearance (unless, say, you’re a model), and that those worlds shouldn’t be demeaned by the intrusion of a petty culture of hotness.

What’s next, a hotness and sexy pre-screen for neuroscientists? Oh, never mind: Remember the neuroscientist who enjoyed an inglorious three seconds of fame for complaining on Facebook that the female neuroscientists at his convention weren’t hot enough to have sex with?

There’s nothing wrong with noticing beauty. There’s nothing wrong with cherishing one’s appearance, or complimenting loveliness, style, and beauty that we perceive in others. Everyone likes to be appreciated; everyone should be able to take pride in at least some aspect of their bodies, and enjoy their sexiness. But might we treat adoration of someone’s beauty as a private gift that we give to that person, rather than as a commodity for public judgment, comment, appraisal, and listing? Might we keep our hotness lists to ourselves, out of deference for the totality of women’s humanity?

See how newfound freedoms slide into duties? Just being smart no longer cuts it. We want sexiness, too, as narrowly defined by the Photoshop-wielding distortionists of mainstream media.

In my mother’s day, you were either brainy or pretty. You were a Plain Jane with smarts, or a cheerleader. For some time, this was the prevailing opposition, in caricature. Dating manuals of the 1950s instructed the nerdy, intellectually vivacious girl to tame or mute her smarts while on the marriage market. “Boys seldom make passes at girls who wear glasses,” the jingle went. There weren't a lot of opportunities for the girl brainiac who wanted a career, or to use her intellect to its fullest. But for those who did stake out this turf in the pre-feminist days, at least they weren't expected to be hot, too.

In the late 1960s and 1970s feminism collapsed the beauty or brains opposition. It was a momentous triumph. "Bright" girls became plausibly marriageable; "cute" girls became plausibly smart. Women's liberation took the beauty or brains limitation and turned it into a beauty and brains possibility. Gloria Steinem herself exuded a lot of sexy energy. Feminists also challenged the entire notion, of course, that women’s worth was defined by cup size or looks. Taming the beast of beauty, they promoted women’s success by competition, achievement, and intellect rather than sexual barter, boobs, or their willingness to sleep their way into a career.

Since then we’ve moved from an idea that women could be smart and pretty, to the ideal that they must be. When I had a post-doctoral fellowship at Brown in the mid-1990s I was invited by undergraduate women to speak on a panel about Playboy's annual recruitment for their Women of the Ivy League issue. Some students felt the issue trivialized women’s intelligence; others objected that it enforced the apparent oddity that a pretty woman could be smart.

It disturbed me because it seemed to add yet another layer of obligation or “achievement” for these already hyper-competitive women: Be a medieval scholar and a Centerfold! As I wrote in my marriage book, the dream of “Having it All” became the nightmare of Doing it All fast enough.

Beauty’s shallow tyranny is such today that even material that purports to subvert the beauty regime ends up reinforcing it. Golda Poretsky has a wonderful critique of a viral Dove soap video about “real beauty.” The video is enthralled with conventional beauty ideas, even as it claims to subvert them.  Women overcome beauty insecurity when they discover that their imagined flaws aren't that bad or noticeable.  In other words, beauty is still the gold standard of self-esteem. You just need to figure out that you have more of it than you thought. To which Poretsky questions, what if others don’t really see you as beautiful, or more beautiful than you think? And, the big question: “who cares?”

The Dove video reproduces with no documentation whatsoever the meme that women are their “worst enemies” in thinking about beauty. Actually, no. Women may have internalized fears of being unlovely to such an extent that they now self-police, self-monitor, and self-judge, but their real “worst enemies” in the matter are, of course, the companies, popular media and corporations—Dove included—that make a fortune by the idealization of narrowly-defined physical beauty, and by the stoking of beauty insecurity.

It’s quite a feat. Dove and other companies create beauty standards that women internalize to the extent that they self-judge, and then Dove swoops in, positioning itself not as the author of the insecurity but as its critic, and declares that women themselves are their worst enemies!

Enough already.  Could we try to notice something else about our fellow humans? How about: wit, smarts, punctuality, friendliness, unselfishness, affability, politeness, tenacity, commitment, ambition, panache, imagination, nice manners, athleticism, good character, perspicacity, or arm span. Anything. It’s no more far-fetched to have a list of “10 Most Witty,” or “10 Most Friendly.” And if we want to do something superficial, then how about “10 Most Stylish.”

Anything, please, but hotness. I want my girl nerds back—not the “Slut Nerds” or the “Sexy Nerds” or the “Hot Nerds.” Just the nerd nerds, please. I want the happily, proudly un-hot on dust jackets. I promise I’ll buy your book.