Scientists generally agree that a massive asteroid or comet killed off the dinosaurs when it struck Earth 66 million years ago. Could a more recent cosmic impact have had the opposite effect on humans by helping usher in the dawn of civilization?

The “overwhelming consensus of the evidence” suggests that a comet did just that about 13,000 years ago, according to a new study published in Earth-Science Reviews. The study reviewed the existing research on the Younger Dryas impact hypothesis, which, in various forms, argues that a comet caused significant extinctions, climate changes, and shifts in human culture around 10,900 BCE.

The idea isn’t exactly new. In his 1883 book Ragnarok: The Age of Fire and Gravel, the writer and Minnesota Congressman Ignatius L. Donnelly wrote about how a huge comet struck Earth about 12,000 years ago, destroying the mythical “lost continent” of Atlantis. But the hypothesis first entered the scientific mainstream with a 2007 study that proposed:

In other words, prehistoric humans might have witnessed a catastrophic cosmic impact that triggered widespread wildfires, global cooling, and the extinction of large animals, some of which might have preyed on humans. It’s still unclear whether the impact occurred. But in the centuries after the comet allegedly struck Earth, human cultures made broad transitions away from hunter-gatherer societies toward agricultural-based civilizations.

What caused Earth’s most recent cooling?

One mystery this hypothesis aims to solve is the cause of the Younger Dryas, which is the brief ice age that Earth experienced about 12,900 to 11,700 years ago. An “impact winter” might have been the culprit: it’s a hypothesized scenario where a cosmic impact causes global cooling because the impact and its resulting ground fires would eject enough material into the atmosphere to significantly block radiation from the sun.

This alleged comet left no crater; proponents of the impact hypothesis argue that much of the comet likely fragmented high in the atmosphere and might have struck a large ice sheet on Earth’s surface. But crater aside, the comet did seem to leave behind other evidence. One example is the Younger Dryas “black mats,” which are distinctive soil layers (or “YD boundaries”) that have been discovered at more than 100 sites across four continents.

It is unclear how the mats got their blackish color. One explanation is that it came from charcoal produced by wildfires. But what is clear is that the mats serve as a dividing line between epochs on Earth, mainly because only certain materials and fossils are found above or below this layer. For example, no spearheads or other archaeological evidence of the prehistoric PaleoAmerican Clovis culture has been found above the black mats. 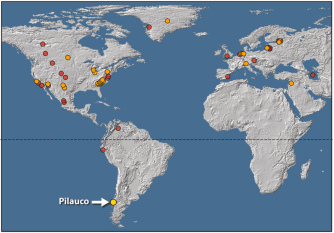 “More generally, many extinct megafaunal species are found below the black mat, but not within or above, including horse, camel, mastodon, direwolf, American lion,” the researchers wrote.

Platinum group elements: Samples taken from ice in Greenland and boundary sites on multiple continents contain unusually high levels of platinum group elements (PGEs). Earth’s crust doesn’t contain many PGEs, but comets do. Volcanoes can also produce PGEs, but this process would leave behind chemical signs, which aren’t found at the black mat sites. Together, this “strongly indicates an [extraterrestrial] source,” the researchers wrote.

Microspherules: YD boundary sites also contain high levels of small particles called microspherules that include minerals with signs “of melting at very high temperatures,” the researchers wrote. A cosmic impact can generate high temperatures, as can humans, volcanoes, and lightning. But considering the lack of evidence pointing to a terrestrial source, combined with analyses indicating that the particles mixed with extraterrestrial materials, data suggests that an impact is the most likely source.

“The only reasonable explanation for their occurrence is a major cosmic impact event,” the researchers wrote. “They are found together with other high temperature melts with similar compositions at three sites. Those at Abu Hureyra, Syria, can only be explained by a cosmic impact.”

Nanodiamonds: At least 22 black mat sites contain unusually high amounts of nanodiamonds, which are “extremely” rarely produced by natural terrestrial processes. “The widespread existence of all these nanodiamond forms can only be reasonably explained by a cosmic impact,” the researchers wrote. Previous research has shown that the shock of a cosmic impact can generate nanodiamonds.

There is no better explanation

Opponents of the impact hypothesis could propose reasonable terrestrial explanations for some of the evidence. But proponents have synchronicity on their side: It’s hard to explain how these different anomalous geochemical signals all manifested in a narrow time window, represented stratigraphically by the Younger Dryas black mats.

This synchronicity is even more compelling when you consider that we have undeniable evidence that 13,000 years ago Earth went through many species extinctions and a brief ice age. A 2008 study touched on the extinction component of the hypothesis, noting, “Stratigraphically and chronologically the extinction appears to have been catastrophic, seemingly too sudden and extensive for either human predation or climate change to have been the primary cause.”

The researchers behind the recent study wrote:

“No YD [boundary] site has yet been found to be obviously inconsistent with a synchronous event circa 10,785 [BCE, plus or minus 50 years]. The only reasonable conclusion is that a major cosmic impact event occurred at this time. Its timing is so close to the onset of YD cooling that a causal link is highly likely.”

Still, even if a comet caused the Younger Dryas, it remains unclear exactly how it might have affected the future of human civilization.

“Such an event might plausibly lead to human culture changes and megafaunal extinctions as proposed, but more detailed research is needed to investigate this,” the researchers wrote.

Tags
archaeologyearth scienceevolutiongeologyhumanitynatural disastersocietySpace & Astrophysics
In this article
archaeologyearth scienceevolutiongeologyhumanitynatural disastersocietySpace & Astrophysics
Related
Starts With A Bang
The good reasons scientists are so hostile to new ideas
Many people out there, including scientists, claim to have discovered a series of game-changing revolutions. Here’s why we don’t buy it.
Hard Science
3 new studies indicate a conflict at the heart of cosmology
The Universe isn’t as “clumpy” as we think it should be.
Starts With A Bang
The sober truth about finding the Universe’s first stars
The Universe certainly formed stars, at one point, for the very first time. But we haven’t found them yet. Here’s what everyone should know.
Strange Maps
Dutch government releases a genuine treasure map from WWII, sparking a hunt for the loot
X marks the spot. The Dutch town of Ommeren has been swamped by detectorists armed with shovels looking for $20-million treasure.
Starts With A Bang
The path forward for astronomers and native Hawaiians
A history of injustice and the greatest natural location for ground-based telescopes have long been at odds. Here’s how the healing begins.
Up Next
Thinking
If there is no God, can anything be objectively good?
Apart from divine authority, is there an ethical basis for right and wrong?