ScienceDebate.org, a nonprofit that promotes science and technology discourse in the public sphere, came up with 20 questions to ask the leading candidates for U.S. Presidency. The questions were crowdsourced and refined by dozens of scientific organizations. Despite the unpredictable nature of the current elections, aside from the Libertarian Gary Johnson, the candidates actually answered.

Here is the rundown of where they stand on some of the major science and tech issues:

Hillary Clinton (D) sees “education, research, and commercialization” as core components of American success and plans to focus on all three as president. She supports universal preschool, debt-free college, training programs, STEM programming in every school. As president, she would work to make sure that research gets appropriate government funding, allowing for “multi-year planning” and “exploration of emerging research areas”. She sees the U.S. currently “underinvesting in research”.

To support commercialization, she would open access to government-funded research, develop “collaborative consortia” to help create new industries, and invest in “Make it in America” partnerships to keep manufacturing in the country.

Throughout her life, Clinton has been inspired by the space program and would look to continue American leadership in this field as president, supporting NASA and advancements towards putting humans on Mars. 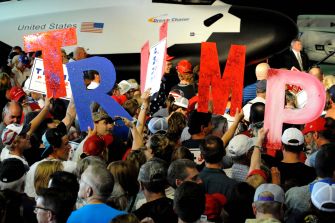 Supporters of Republican President candidate Donald Trump cheer during his address at the Wings Over the Rockies Air & Space Museum in Denver, Colorado on July 29, 2016. (Photo by JASON CONNOLLY/AFP/Getty Images)

Donald Trump (R) is less detailed on this subject (as he is on other subjects) but sees innovation as “one of the great by-products of free market systems”. He would reduce impediments for products to enter the market, creating a fair trade environment. He thinks that there is a need to get a grip on spending, but does see the federal government playing a role in encouraging space exploration and investing into research and development across academia.

When asked about long-term research funding in particular, he again pointed to the space program as well as “institutional research,” saying it’s something we must have. He reiterated his support for space exploration when asked about it directly, recognizing many positive effects of a “vibrant space program”. He sees “exploring beyond our own space neighborhood” as a priority. 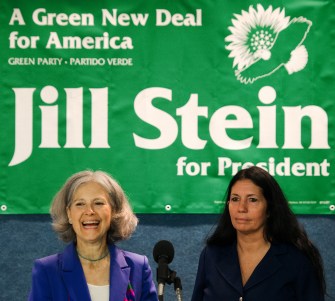 Green Party’s Jill Stein regards her party’s platform as very focused on innovation, with proposals on climate change, free public education from pre-school to university, cancellation of student debt and Medicare for All. She would reduce Pentagon spending and invest freed resources into public R&D.

She sees “a just economy” as the cornerstone of innovation. The greatest challenge facing us, according to Stein, is climate change, and she would look to science and technology to contain greenhouse gases and create “a resilient society” that could adapt to the inevitable climate changes.

She would also take a look at how well some government-funded institutions like the National Science Foundation are functioning, preferring to make science policy more in line with what average people would need and want.

Her views on the space program focus on re-orienting it from military and corporate interests towards helping solving Earth-bound problems like climate change.

Hillary Clinton very much believes in climate change and sees it as “an urgent threat” that needs to be addressed. She would look to continue Obama’s policies that cut down on pollution by greenhouse gases.

She gets more specific in offering 3 goals that we should achieve within 10 years to make America “the clean energy superpower”. The goals feature generating half of the country’s electricity from clean sources and installing half a billion solar panels in her first term. She’d also cut energy waste and reduce oil consumption by making vehicles more efficient and the fuels cleaner.

She would also launch a $60 billion Clean Energy Challenge to spread the clean energy practices throughout the country.

Donald Trump, on the other hand, believes that we don’t know everything about “climate change” (an expression he puts in quotation marks, hinting that he doesn’t necessarily trust it’s real). Instead, he would focus on more concrete problems like clean water, diseases like malaria, and increasing food production to keep up with the world’s growing population.

He does mention that we should focus on developing energy sources that would make us less dependent on fossil fuels. In his response about energy policy, he expands that it should be the country’s goal to achieve “energy independence”. That would include trying solar energy, nuclear power and bio-fuels, with the winner decided by market forces.

Expectedly, Green Party’s Jill Stein makes climate change a central issue, calling it in no uncertain terms “the greatest existential threat that humanity has ever faced”. She proposes a number of measures to combat it, including a so-called Green New Deal that would not only curb climate change but revive the economy and make oil-related wars unnecessary.  She would transition the country to 100% clean renewable energy by 2020, creating 20 million jobs. One way to do that would be to build a smart electricity grid that would pool and store energy from various renewable sources.

Stein is the only candidate to explicitly come out against fracking, offshore drilling, natural gas pipelines and uranium mines. She would halt investment into “fossil fuel infrastructure” and phase out fossil fuel and nuclear power plants, which she considers unsafe and “dirty”.

Hillary Clinton would make sure the internet remains a place where people could equally and freely exchange knowledge and ideas. She would also invest in cybersecurity, building on President Obama’s policies. If cyber-attacked, she promises the U.S. would be “ready with serious political, economic and military responses”.

Donald Trump also talks tough about a potential cyber-attack, saying such a “provocative act” would be met with a proportional response that would ultimately eliminate the threat.

Jill Stein would protect freedom on the internet by opposing the Online Piracy Act, defending net neutrality, and supporting public broadband. As far as cyber-security, she would ban cyberwarfare via an international treaty and look to the U.N to create a new agency for identifying cyber attacks.

Hilary Clinton sees this as a very serious issue that affects millions of Americans. She points to her recently released mental health plan, which focuses on measures like early diagnosis and a national initiative for suicide prevention. Among other proposals is prioritizing treatment over jail for non-violent offenders and investing into brain and behavioral research.

Donald Trump also considers the issue vital, calling it “one of the great unfolding tragedies in America today.” He would address it via reforms, investment, and allowing family members more involvement in the care of the mentally ill.

Jill Stein regards mental health care as a fully-funded part of the single-payer Medicare for All universal health care system that she advocates. She also points out the government’s responsibility in addressing PTSD and other conditions suffered by veterans as well as mentally ill prisoners. 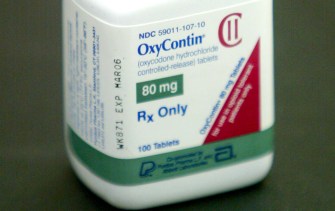 Hillary Clinton recognizes that the country is in the midst of a “quiet epidemic of drug and alcohol addiction,” focusing particular attention on 52 million Americans who have misused prescription drugs. She proposes a $10 billion initiative to fight substance abuse.

Donald Trump views the “inflow of opioids” into America as the issue to tackle. He sees investment into stopping this problem as a way to increase American productivity.

Jill Stein would end “the war on drugs” and use the available funds for research, education and treatment.

Here’s where you can read the full questions and answers by the candidates.

Types of therapy are about as different as the people who use it.
Neuropsych

Catatonia: the person’s body may be frozen, but their minds are not

One theory for catatonia is that it is similar to an animal’s “death feint.”
Up Next
Hard Science

How Costa Rica achieved 100% renewable energy, and what it means.